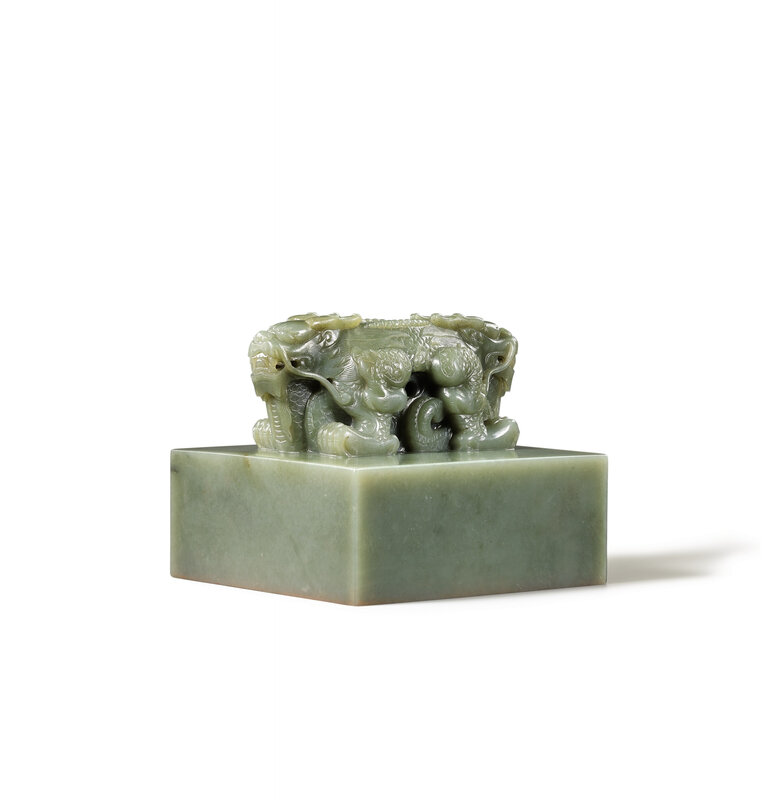 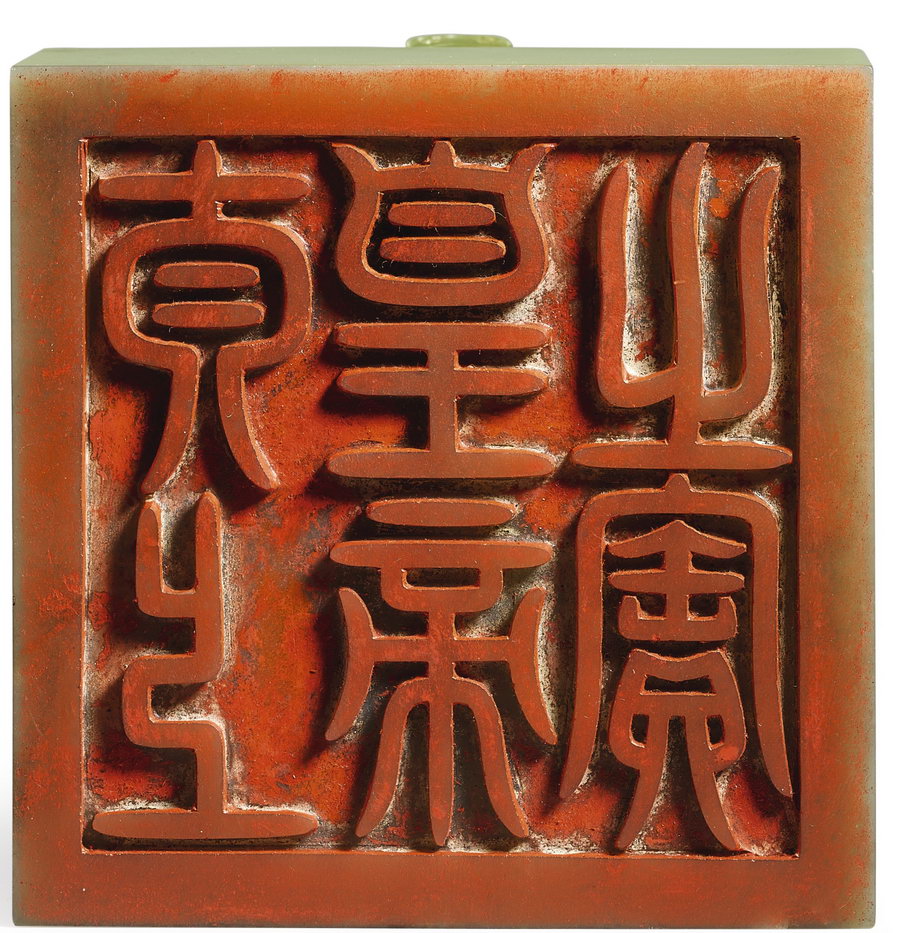 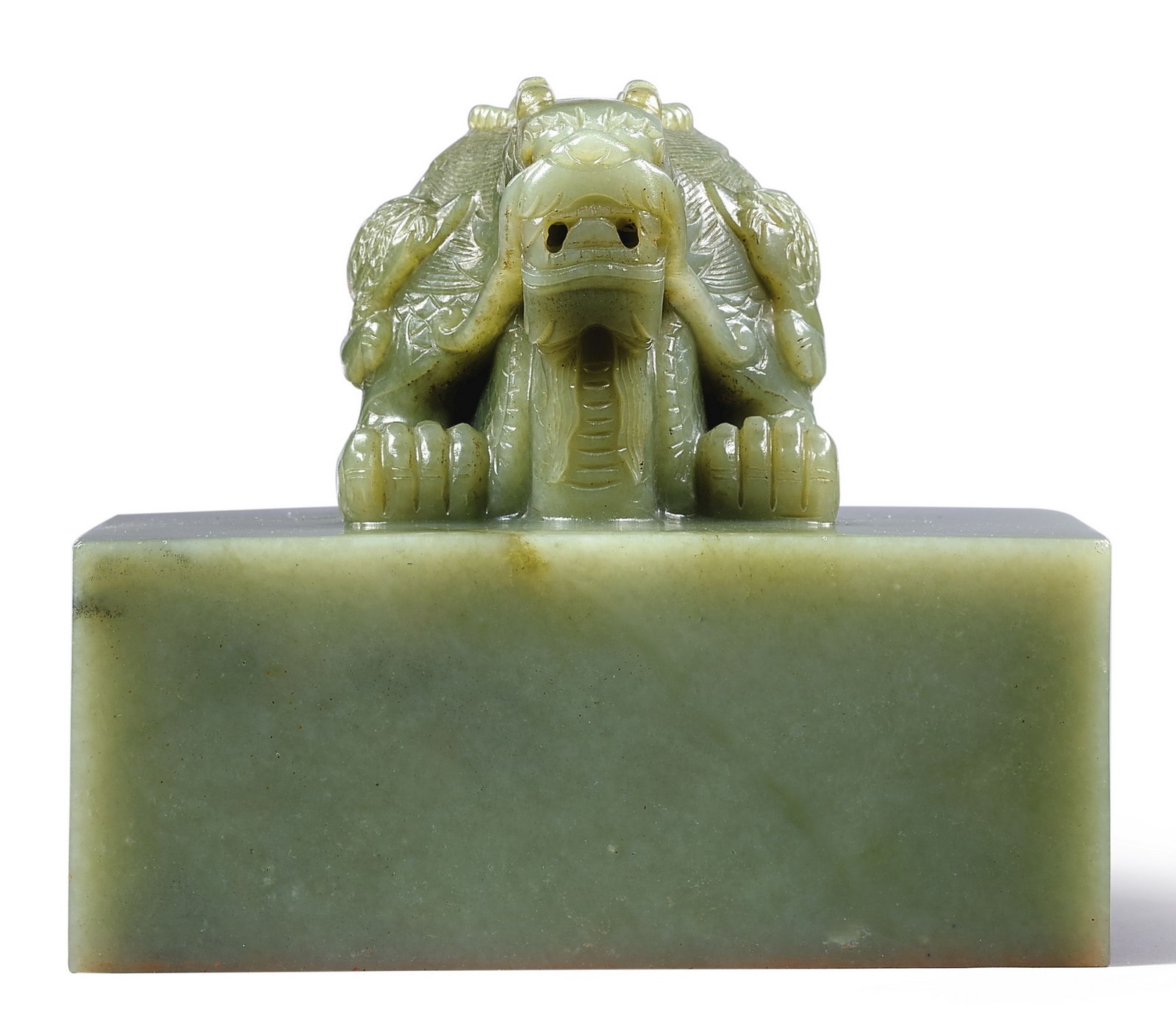 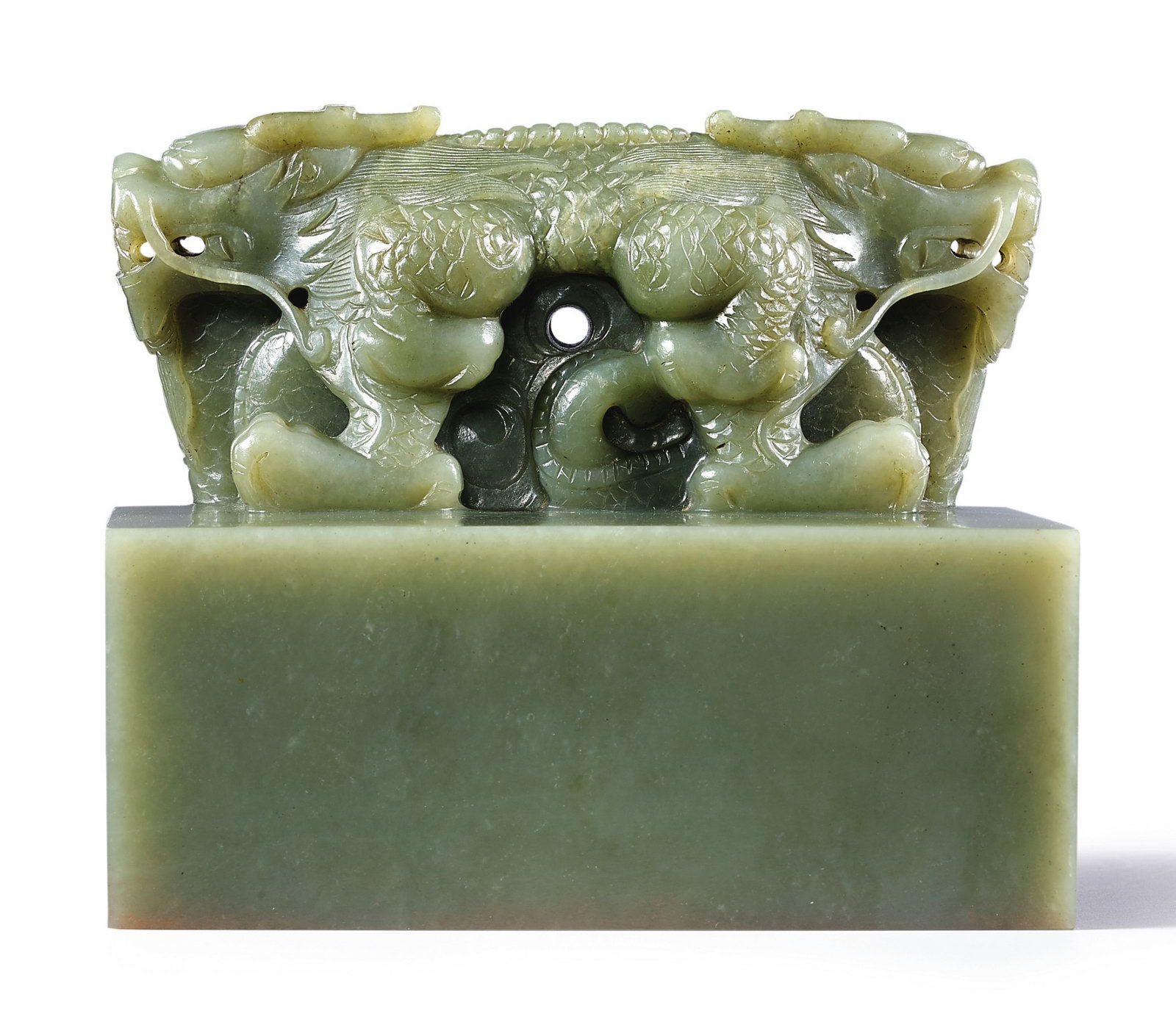 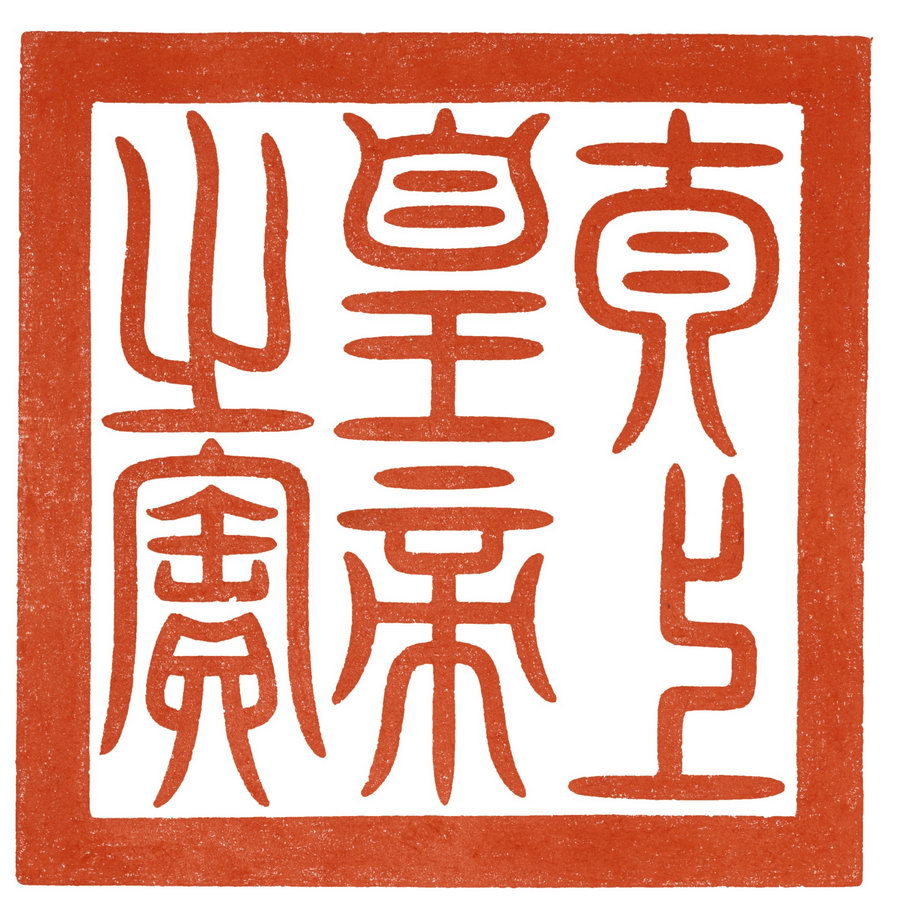 the substantial stone of an even light fern-green colour, superbly worked in the form of a pair of addorsed dragons resting atop the seal, each mythical beast powerfully rendered with long whiskers flanking a slightly agape mouth revealing sharp fangs, the upper edge of the intertwined scaly bodies decorated with well pronounced bosses simulating prominent spinal columns, the seal face crisply worked with a border enclosing a six-character inscription in seal script reading Taishang huangdi zhi bao ('Treasure of the Emperor Supreme'), the centre of the 'dragon' finial pierced through with an aperture, original zitan stand.

The Qianlong Emperor (1711-99, r. 1735-96) had the longest reign period in Chinese history and also enjoyed one of the longest life spans. He inherited the dynasty from his ancestors, and built on its prosperity and power, creating a dynasty of great splendour during his reign. For his legacy he commissioned objects to reflect the different stages and major events and turning points in his life. A few years ago, I published a book titled The Treasure Seals of Emperors and Empresses of the Ming and Qing Dynasties, an exclusive study of the treasure seals of Emperors and Empresses. In the book I summarised the characteristics of Qianlong’s seals, one of which is that his seals were made to record meritorious events. During Qianlong’s reign, seals were carved to commemorate special state events and family happenings. These seals were then re-carved in great numbers. If we lined up these seals according to the year they were made, we can clearly see all the major state events and family happenings of his reign.

This jewel of Khotan-green jade is carved with a pair of addorsed dragons, and the seal inscription is composed of the six characters taishang huangdi zhi bao (‘Treasure of the Emperor Supreme’). It was originally kept in a zitan wooden box which is now lost, but the zitan stand still remains.

In order to understand and appreciate this seal, we have to know the history of taishanghuang (‘Emperor Supreme’). Taishang means ‘the most supreme’, a term of extreme respect; and together with the word huang means that ‘its virtue is more supreme than the emperor’. Therefore, the characters together refer to someone ‘whose virtue is even more supreme than the emperor’. The title taishanghuang, which first appeared during the Qin Dynasty, has a long history. According to Shi ji [Records of the Historian] by Sima Quan (c.145-91 BC), after the first Emperor, Qin Shi Huang (259-210 BC, r. 220-210 BC), united the six kingdoms, he gave his deceased father, King Zhuangxiang (281-247 BC), the title taishanghuang. Shi ji also records that after Liu Bang (c.256-195 BC) of the Han dynasty ascended the throne, known as Emperor Gaozu (r. 202-195 BC), he showed extreme respect towards his father, Liu Taigong (272-197 BC). Legend has it that one day his father’s housekeeper said the following to his father:

“Heaven does not have two suns, neither should the earth have two kings. Although the present Emperor is your son, nevertheless, he is the head of the country. Although you are the father of the Emperor, you are his subject. How can the Emperor kowtow to his subject? If this continues, your prestigious position will not last long.”

When Liu Bang visited his father, Liu Taigong went to greet him outside the front door with a sweep of his hand. He humbly led his son into the house. Seeing this, Liu Bang was very surprised and asked why his father was acting so humble. Liu Taigong said, “You are the Emperor of the people, I am your subject, how should law and regulation be changed because of me!” Thus Liu Bang issued an imperial decree to honour Liu Taigong as the Emperor Supreme. Liu Taigong was the first person in the Chinese history to become an honored Emperor Supreme despite not being an Emperor himself.

Since that time, all Emperors who passed the throne down to the crown princes were thus called Emperor Supreme. Throughout history, those who have lived to become Emperor Supreme have come to accept this title under various circumstances although most have been forced to take the position. Those who were worthy of the title taishanghuang were those who remained well respected and powerful, and the Qing dynasty’s Qianlong Emperor was without a doubt in that category. The Qianlong Emperor became Emperor Supreme after he voluntarily abdicated his throne. Hence, this was a major turning point in his life and to commemorate this he ordered the making of this group of seals.

The Qianlong Emperor claimed that he had always vowed to choose his successor and abdicate the throne if he could rule the empire for sixty years. The Emperor however only made his thoughts public on the 11th month of the 37th year (1772). He did not yet realise the significance of this pledge until a few years later, when the connection between the abdication and the investiture of the crown prince became apparent. An Emperor was always expected to be a man of his words; to fulfill his promise, on the third day, ninth month of the sixtieth year of Qianlong’s reign (1795), the eighty-five year old Emperor convened his princes, the nobility and his great generals, to declare that his fifteenth son, Yongyan (1760-1820, r. 1796-1820), Prince Jia of the First Rank, was to become crown prince. The following year, the Qianlong Emperor personally held a grand coronation ceremony for his son where he announced in an imperial edict: “… the Crown Prince on the morning of the lunar New Year’s day of the bingchen year (1796) is to take the position of Emperor [under the reign title Jiaqing]. I, sovereign of the Taihedian (‘Hall of Great Harmony’), now bow and confer the Imperial Seal. Henceforth I shall be th­e Emperor Supreme,” see Qing Gaozong yuzhi wen yuji [Anthology of imperial Qianlong proses, the final collection], vol. 1. And in this manner, the Qianlong Emperor concluded his sixty-year reign and became the Qing dynasty’s only, and thus China’s last, Emperor Supreme.

At the same time as he proclaimed that he was passing the throne to his son, the Qianlong Emperor was also already planning and preparing himself for a positive life as Emperor Supreme. On the 28th of the 9th month of the same year, he gave a speech saying: “After I have passed on the throne, I shall have the phrase taishang huangdi zhi bao carved onto my finest jade seal. Then immediately after that, I shall have the imperial edict Shiquan Laoren zhi bao shuo (‘On the treasure of the completely fulfilled elder’) engraved as a volume on the life of an Emperor Supreme in order to display the flourishing and growth of the dynasty while I am the Emperor Supreme,” recorded in ‘Dianli yi [Ceremony, part 1]’, Guo chao gong shi xu bian [Sequel of the imperial house and court history]. This original ‘taishang huangdi zhi bao’ seal which, with an area of 22.5 cm square, is the largest imperial jade seal of the Qing dynasty, is preserved in the collection of the Palace Museum, Beijing (fig. 1). Following the orders of the Qianlong Emperor, craftsmen in addition made further taishang huangdi zhi bao seals from various types of jades, and the current seal is one of these. 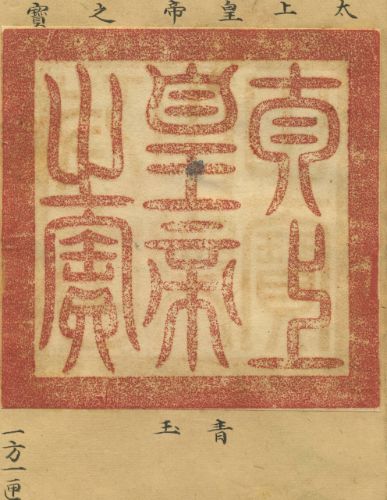 Impression from The Qianlong Baosou.

According to the records in the Qianlong yuxi yinpu [Record of Qianlong imperial seals] of the Qianlong baosou, over twenty taishang huangdi seals of various sizes were made. The majority of these seals is still in the Palace Museum, Beijing. The largest of these has already been mentioned; the seal offered in the present sale comes next in size, being 13 cm square, and is thus not only the second largest of the taishang huangdi zhi bao seals, but also the largest in private hands. Moreover, the largest taishang huangdi zhi bao seal in the collection of the Palace Museum, Beijing acted only as a decorative token of Qianlong’s status and has never been used, whereas all his other similar seals were impressed on paintings and calligraphic works. In other words, the seal offered in this auction is the largest seal that was used by Qianlong as Emperor Supreme, which reflects the importance of this object.

Carved from a superb boulder of Khotan-green jade from Xinjiang province, the exceptionally large seal is flawless in texture and pleasing in colour. The characters on the seal face are boldly carved and flow with ease, and even though the stone is extremely hard, the seal inscription is executed with elegance, the character strokes are even, and the composition tidy, demonstrating the skill and artistry of the craftsman.

The majestic pair of addorsed dragons crouching on the seal, detailed with finely carved scales, horns, hair, manes and beards, gives a forceful presence through their imposing posture. The dragons are particularly three-dimensional as they are carved in varying levels of relief, a style of carving more typical of the early and mid-Qianlong period, which again demonstrates the unique value of this seal.