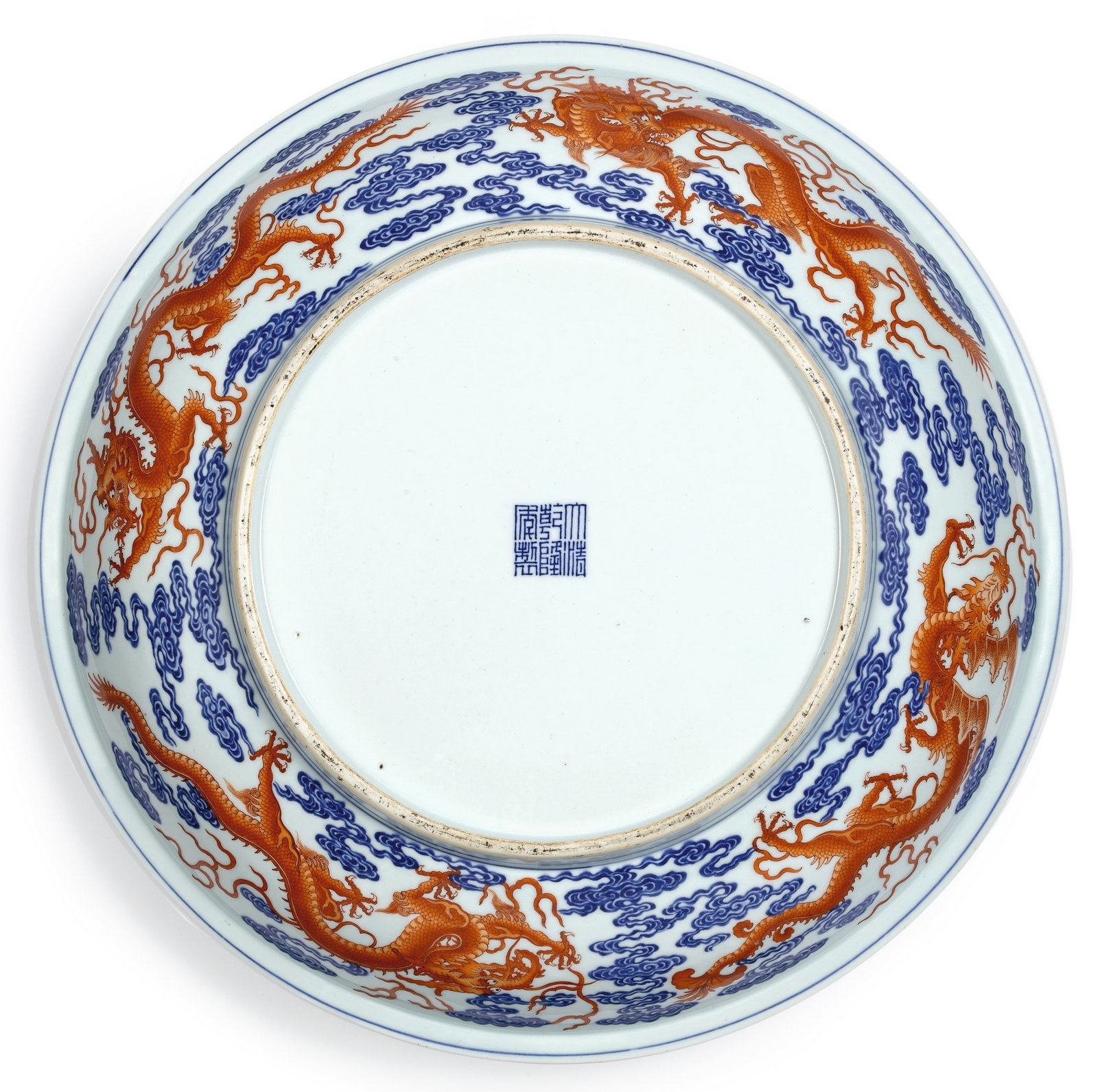 finely potted with rounded sides rising from a short tapered foot to a flat everted rim, the interior superbly painted with a central medallion enclosing an iron-red scaly five-clawed frontal dragon coiling around a 'flaming pearl', against a ground of underglaze-blue turbulent waves, surrounded on the cavetto with four different iron-red dragons striding rampantly amidst ruyi-shaped cloud scrolls exquisitely rendered in shaded tones of cobalt-blue, each serpentine mythical beast portrayed differently, two of them five-clawed, one with an elongated trunk, the other two three-clawed, one winged and detailed with a fish tail, all surrounded by a border of crashing waves on the rim, the exterior vibrantly decorated with four similar dragons striding through clouds, the base inscribed with an underglaze-blue six-character seal mark.

This magnificent charger is endowed with exceptional provenance, with a recorded history back to the early 20th century, when it was in the collection of the Nobel family, the wealthy Swedish industrialists. It was the property of Rolf Nobel (1882-1947), who received it from his elder brother Emanuel Nobel (1859-1932). Rolf and Emanuel were both nephews of Alfred Nobel (1833-96), founder of the Nobel Prize Award. Together with Oscar I, King of Sweden (1799-1859), Emanuel Nobel jointly financed the groundbreaking Sven Hedin’s (1865-1962) expeditions to China and Central Asia in the 1920s and 30s.

Powerfully painted with ferocious dragons leaping proudly through cresting waves and scrolling clouds, dishes of this magnificent size and formidable decoration were made to impress. Such wares were used at imperial banquets and on special celebratory occasions, such as the ‘Thousand Elderly Banquets’ held in honour of senior citizens at which thousands of invited guests were served great feasts. The Manchu custom of banqueting closely followed the Mongolian and Tibetan traditions of shared communal dining.

Only a handful of Qianlong examples of this impressive size and rigorous decoration are known to exist in either public or private collections. There is, for example, a Qianlong-marked charger in the Nanjing Museum, included in the exhibition Qing Imperial Porcelain of the Kangxi, Yongzheng and Qianlong Reigns, Art Gallery, The Chinese University of Hong Kong, Hong Kong, 1995, cat. no. 81, and also illustrated on the dust jacket. Compare also one in the Idemitsu Museum of Art, Tokyo, illustrated in Chinese Ceramics in the Idemitsu Collection, Tokyo, 1987, pl. 956; another in the Seikado Bunko Art Museum, Tokyo, included in the exhibition Seikado zo Shincho toji. Keitokuchin kanyo no bi [Qing porcelain collected in the Seikado. Beauty of the Jingdezhen imperial kilns], Seikado Bunko Art Museum, Tokyo, 2006, cat. no. 53; and yet another sold in Christie’s Hong Kong, 28th October 2002, lot 709.

The decoration found on this dish is directly or indirectly inspired by an early-Ming pattern. Compare a Xuande mark and period dish painted with a side-facing five-clawed dragon among, in the centre, crashing waves and the side decorated with three dragons striding among clouds, excavated at the waste heap of the Ming Imperial Kilns in Zhushan and included in the exhibition Xuande Imperial Kiln Excavated at Jingdezhen, Chang Foundation, Taipei, 1998, cat. no. 87 (fig. 1). 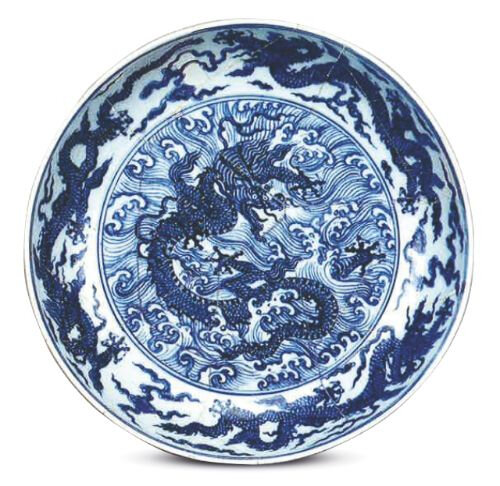 Blue and white ‘dragon against waves’ saucer dish, mark and period of Xuande, excavated at the waste heap of the Ming Imperial Kilns in Zhushan.

Dishes of this design were first revived during the Yongzheng period of the Qing dynasty. The Yongzheng Emperor was known to have sent antiques from the palace to Jingdezhen both in order to set standards and as a model and inspiration for designs. A Ming dynasty prototype of comparable design might have been sent to the imperial kiln for copying and inspiration.

The creative ingenuity of the Qing potter in his use of space is evident from the successful transfer of a pattern originally made for much smaller vessels. The different design elements used on this dish are perfectly composed to avoid even a hint of overcrowding or any awkward gap that could hinder the overall harmony. While maintaining the essence of the original design, the artist created a motif that is familiar yet spontaneous. The side-facing dragon has been replaced with a frontal dragon and the crashing waves no longer cover part of the dragon’s body, with the effect of giving a greater sense of the creature’s dominance and strength. The use of iron-red heightens the contrast between the dynamism of the background and that of the dragons while bestowing upon the scene a stronger sense of auspiciousness. The addition of a crested rolling wave band encircling the rim of the dish further demonstrates the craftsman’s skill - he recognised that a large dish such as the present one needs a band to frame and bring together the expansive design -  an element not necessary for the smaller Ming dishes.

Dishes of this type, first revived in the Yongzheng period, continued to be favoured by the Qianlong Emperor. While at first glance they appear to be almost identical, upon close examination it is evident that the artists of the two periods interpreted the design differently. In comparison to the Yongzheng decoration, the Qianlong rendering emphasizes orderliness and precision, as evident in the uniformity of the clouds and waves. Moreover, the four dragons on the rim placed on the axis of the central dragon on the Yongzheng dish have shifted 45 degrees anti-clockwise. The strictness of the Qianlong version reflects a very different Emperor to his predecessor Yongzheng.

A Yongzheng dish of large size sporting this design in the Palace Museum, Beijing, is published in The Complete Collection of Treasures of the Palace Museum. Blue and White Porcelain with Underglazed Red, vol. 3, Hong Kong, 2000, pl. 223. See also another illustrated in Min Shin no bijutsu [Ming and Qing art], Tokyo, 1982, pl. 154; a further example in the Meiyintang collection, published in Regina Krahl, Chinese Ceramics from the Meiyintang Collection, London, 1994-2010, vol. 4, no. 1723; and another from the collection of Dr. Alice Cheng, sold in these rooms, 9th October 2012, lot 125.

According to Qinggong neiwufu zaobanchu dang’an zonghui [General collection of archival records from the Qing imperial household department workshop], on the 25th day in the sixth month of the third year of the Qianlong period, corresponding to 1738, a Xuanyao hong long qing yun haishui dapan (‘large Xuande-kiln dish with red dragons amongst blue clouds and waves’) was presented to the Emperor together with other porcelains. For large vessels in this group, drawings were ordered to be produced and sent, together with the smaller vessels, to Tang Ying (1682-1756) in Jiangxi for reproductions; see Zhang Faying, ed., Tang Ying du tao wendang [Archive on Tang Ying’s Supervision of the Imperial Kilns], Beijing, 2012, pp. 148-152. This entry is likely to refer to a Xuande-style charger, possibly produced in the Qing dynasty, rather than a Ming original. Terms such as Xuanyao or Jiayao (‘Jiajing-kiln’) were often used in Qing court record to classify antique-inspired objects. Moreover, there are no known Xuande examples of matching decoration. According to the record, whether the dish mentioned in the record was a prototype or an imitation, due to its large size, a drawing of it had to be sent to Jingdezhen instead. The close resemblances in size, form and decoration of the Yongzheng and Qianlong dishes strongly suggest that such a drawing was likely to have been based on a Yongzheng interpretation of the Ming original.