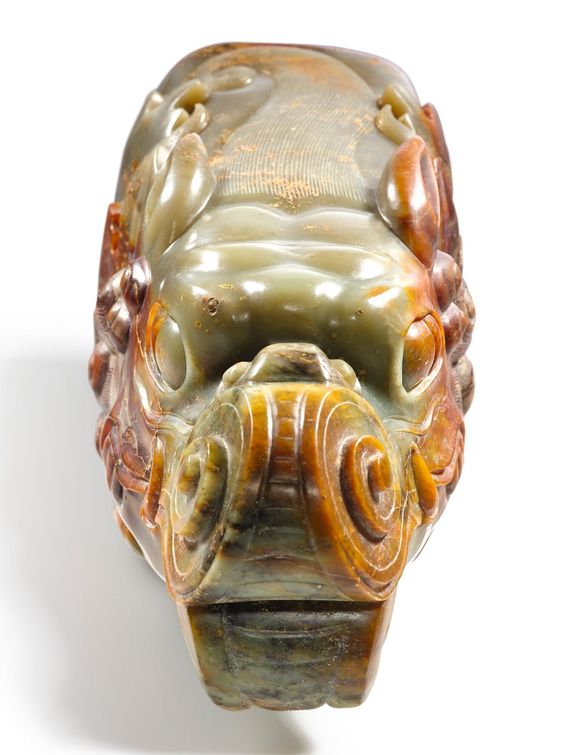 powerfully and boldly worked in the form of a dragon head, the striking mythical beast rendered with circular glaring eyes below a bulging supraorbital ridge, the snout stylised with a scrolling profile, the flaring nostrils and prominent mouth protruding outward, two sharp fangs subtly extending upward toward the undulating whiskers, the beast further portrayed with a pair of small furled ears and finely incised mane and beard, the moss-green stone extensively accentuated with attractive russet skin to the sides of the beast's head, stand.

Note: The dynamism and vigour of this dragon, exemplified in its bulging facial details and rippled lines of carving along the body, expresses the bold and unconstrained spirit of the Yuan dynasty to full extent. A related jade finial of similar size, but with a large oval perforation in the base of the carving flanked by two smaller holes to possibly surmount a staff, is illustrated in Thomas Lawton et. al., Asian Art in the Arthur M. Sackler Gallery. The Inaugural Gift, Washington D.C., 1987, pl. 85, where the author notes that "architectural comparisons for this image are provided by the acroteria that decorated the ridges of traditional Chinese buildings" (p. 131). A large jade dragon head finial carved in a similar style to the Sackler example, with a deep double aperture on the underside, was offered at Christie's New York, 10th December 1987, lot 62. Compare also a carving of a dragon, crouching on all fours with arched back, illustrated in Brian Morgan, Naturalism and Archaism. Chinese Jades from the Kirknorton Collection, London, 1991, pl. 64. For an example of an architectural element in the shape of a dragon head, similarly rendered to the present piece, see one from the Inner Mongolia Autonomous Region Museum, Hohhot, exhibited and published in the catalogue to the exhibition The World of Khubilai Khan. Chinese Art in the Yuan Dynasty, The Metropolitan Museum of Art, New York, 2010, p. 49, fig. 58 (fig. 1). 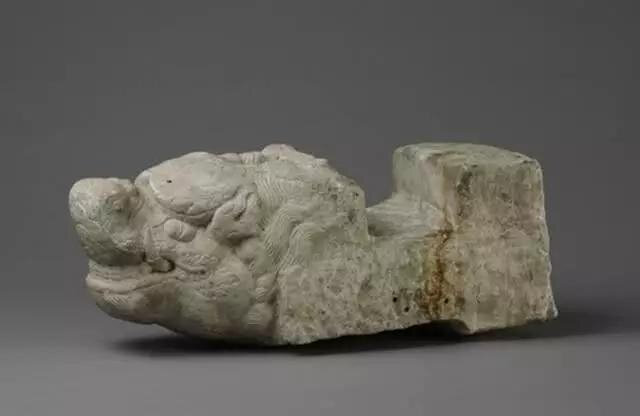 The dragon is an auspicious and powerful creature revered for its ability to bring life-giving rain and its appearance in times of righteous and benevolent reigns. The prevalence of Daoism in the Yuan and the association of Daoism with jade saw nearly all jade figures of people and animals of the period supported by or with an indication of clouds. The present carving, while depicting only the head, gives the impression of flying as seen in its fluttering whiskers and ears that appear to angle back. Moreover, the curling snout and mane are reminiscent of the swirling form of clouds.

Jade carving in the Yuan dynasty underwent a change, with carvings produced for the patronage of the Emperor, court and officials and thus saw a marked shift away from its burial and ritual association of the past. As a result, there was a growth in jade forms produced for this exclusive audience, resulting in more wares for the scholar's studio, the table, ornamental items and magnificent showpieces of huge size.