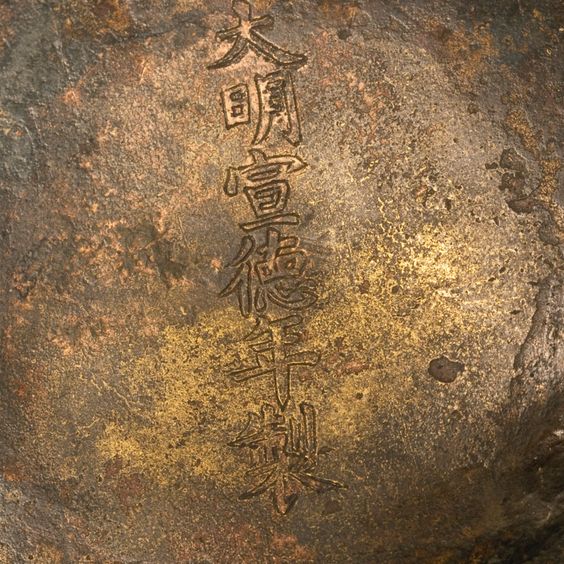 the interior cast with a domed ring to the centre with a flat well and everted rim, finely enamelled to the centre with a single lotus spray framed by a border of lotus lappets, lotus and chrysanthemum sprays, the well with scattered florets with cloud scrolls interspersed by floret heads to the rim, all in blue, yellow, red, green and white enemel against a turquoise ground, the base incised with a six-character Xuande mark.

Provenance: Collection of Henry and Sula Walton (until 2009).

Note: It is rare to find cloisonné enamel cupstands of Xuande mark and period and only two other examples with a reign mark of this type, the outlined style similar to that found on bronzes, are known; see one in the Qing Court collection and still in Beijing, illustrated in The Complete Collection of Treasures of the Palace Museum. Metal-Bodied Enamel Ware, Hong Kong, 2002, pl. 28, together with a similarly decorated example but the centreplate decorated with a gilt-bronze medallion containing a four-character Xuande reign mark, pl. 29; and one from the collections of T.B. Kitson and Mrs Walter Sedgwick, sold in these rooms, 2nd July 1948, lot 49, and now in the collection of Pierre Uldry, included in the exhibition Chinesisches Cloisonné. Die Sammung Pierre Uldry, Museum Reitberg, Zurich, 1985, cat. no. 23. A closely related cupstand, but with the six character mark written in two vertical lines, include one from the collection of Sir Harry and Lady Garner and now in the British Museum, London, published in Harry Garner, Chinese and Japanese Cloisonné Enamels, London, 1962, col. pl. B and pl. 95A; and another from the McLaren collection, illustrated in the Museum Reitberg exhibition catalogue op. cit., p. 93, fig. 57, and sold in these rooms, 16thJune 1999, lot 704.

Although no contemporary cloisonné enamel cups appear to have been published, Garner notes that wine cups made of copper and decorated with designs in colours are mentioned in the Gegu yaolun (The Essential Criteria of Antiquities) by Cao Zhao, published in 1387 (see Garner, op. cit., p. 31).

The decoration of mixed flower scrolls, classic scroll and wave band has close counterparts in early 15th century blue and white porcelain and carved lacquer; however the depiction of five flowers rather than the customary ‘Flowers of the Four Seasons’ is very unusual.