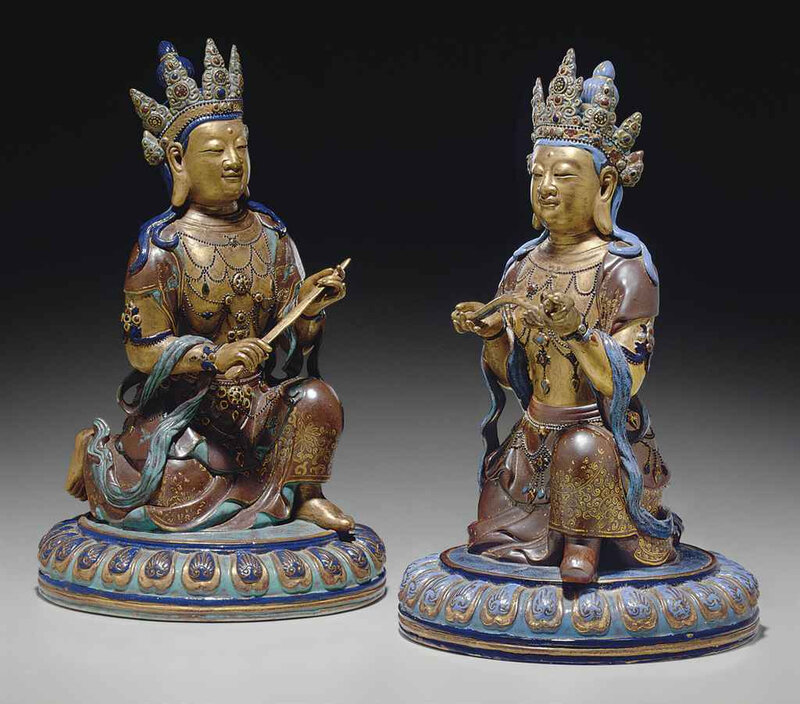 Each figure shown kneeling atop a lotus base, one barefoot and holding a sword in his two hands, the other a ruyi scepter, wearing a gilt-decorated brown shawl and waist-tied dhoti, a celestial scarf draped over the forearms, a beaded necklace and a five-point crown behind which can be seen the blue-enameled hair dressed in a tall topknot as well as falling in tresses onto the shoulders, the faces, chest, arms and legs gilded, the hair, jewelry, garments and scarves highlighted in robin's egg-blue, and blue and brown enamels.

Note: This series of figures may be modeled after a Ming dynasty, Xuande period gilt-bronze original currently in the Berti Aschmann Foundation, Museum Reitberg, Zurich, and illustrated in On the Path to Enlightenment, 1995, p. 122, no. 72, where the author suggests that the figure may have been placed next to a central Tathagata enthroned on the altar.

A similar figure dated to the Qianlong period is illustrated by I. L. Legeza in A Descriptive and Illustrated Catalogue of the Malcolm MacDonald Collection of Chinese Ceramics, London, 1972, p. 79, no. 384. Another figure of similar size, also dated to the Qianlong/Jiaqing period, was sold in our Hong Kong rooms, 29 April 2002, lot 539. See, also, the figure sold in these rooms, 20 March 2001, lot 276.