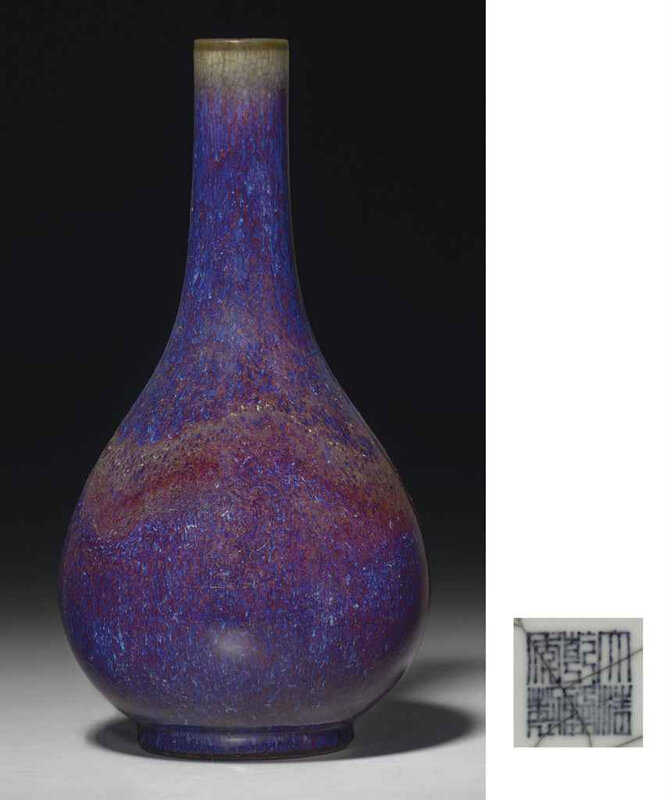 With pear-shaped body rising from the short foot to the cylindrical neck, covered all over with a deep streaked flambé glaze varying from mauve to lavender and thinning to a pale mushroom at the rim, the base covered with a mottled brown and pale celadon glaze, Japanese wood box.

Note: This distinctive glaze first appears during the Yongzheng period and seeks to recreate the famous classical Jun wares of the Song dynasty. The splashes and streaks characteristic of this glaze are described as yao bian, or 'transmutation glaze', which has been the subject of much research. For a discussion of this topic see R. Kerr, Chinese Ceramics: Porcelain of the Qing Dynasty 1644-1911, p. 75, and N. Wood, 'The Evolution of the Chinese Copper Red', in R. Scott (ed.), Chinese Copper Red Wares, Percival David Foundation of Art, London, 1992, pp. 29-30.

The potters at the imperial Jingdezhen kilns were charged with the task of reproducing these glazes on porcelain. Such was the enthusiasm of the Yongzheng emperor for Jun glazes that the important Taocheng jishi bei (Commemorative Stele on Ceramic Production), composed by the famous imperial kiln director Tang Ying in 1735, lists no fewer than nine different Jun-type glazes, and noted that five of these were based upon ancient examples that had been sent from the palace in Beijing to the imperial kilns hundreds of miles to the south at Jingdezhen, in Jiangxi province. In order to achieve successful imitation of Jun glazes, Tang Ying went to considerable lengths, including sending his secretary Wu Yaopu to Junzhou in 1729 to try and obtain the recipe for Jun glazes. This dedication to the accurate recreation of Song dynasty glazes is evident on the present lot which closely resembles Jun wares with its mottled purple tones.