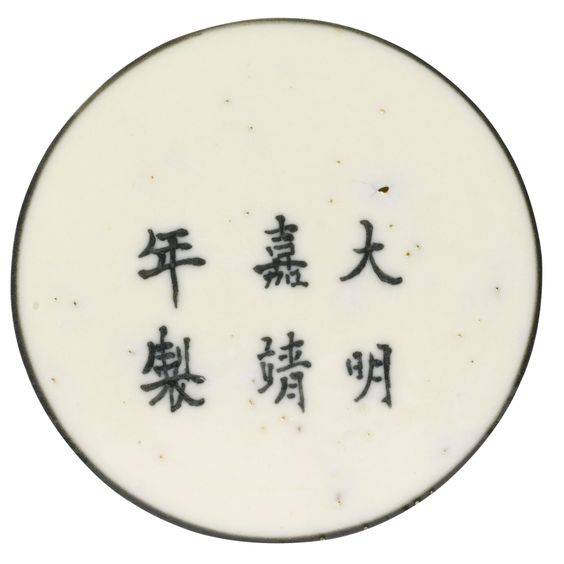 Note: The present vase offers an array of spiritual and auspicious imagery. The upper section focuses on the theme of longevity with deer intermingling with crane amidst towering pines. Around the center are Daoist animal symbols for the four cardinal directions: the green dragon of the east; the vermilion bird of the south; the white tiger of the west; and the 'dark warrior' of the north, an entwined tortoise and snake. These animals, known as the Sishen (the four divinities) represent the division of space into four directions and the division of time into four seasons. According to Stephen Little in Taoism and the Arts of China, Chicago, 2001, no. 9, by the Han dynasty these symbols had been codified; each aligned with either the yin or yang force creating perfect balance. A fu and shou character each form reserves, one enclosing a scene of two sages conversing and the other depicting the patriarch of Zen Buddhism, Bodhidharma crossing the Yangzi river on a slim reed.

The three religions are often representationally blended on decorative forms. In one way, the lack of a dominant faith bolstered the imperial system but it was critical that the emperor embody all three in order to retain centralized power. The Kangxi emperor understood that successful ideological integration required a dualistic strategy of incorporating and repurposing these time honored themes, many of which dominated late Ming thought.

This vase features a rare and intentional use of underglaze black.  According to Matthew Bunny, the head of the International Research in the Oriental Ceramics Trace Model Material Evidence Research Center, the technique differs from the overglaze and better known 'famille-noire' which is a layer of black on the surface of the white glaze, with an additional layer of glaze (usually green) added over the top. To create the underglaze black of the present piece only a minute amount of cobalt would have been used to create the pigment; any more than 1% would have produced a brilliant blue. This observation has been verified by Mr. Bunney who has performed micro-imaging on the vase. There appears to be no contemporary documentation relating to the production of underglaze black but it seems reasonable to assume it was one of many experimental and innovative techniques of the period.