Abu Dhabi - In a rare comparative study, Louvre Abu Dhabi’s upcoming exhibition Furusiyya: The Art of Chivalry between East and West (19 February – 30 May 2020) will display objects of medieval chivalric culture from the Islamic and Christian worlds. The immersive presentation will encompass over 130 artefacts, from medieval armours, objects related to riding and battle, as well as illuminated manuscripts depicting chivalric scenes. Particular attention was paid to the values of the medieval Knights. Courage, faith, loyalty or honor can thus be seen as the anchor of a common culture, present in both Islamic East and Christian West.

Presented across three sections, artefacts on show originate from across the Middle East, including Iraq, Iran, Egypt and Syria, to the French and Germanic states in Europe, covering the period from the early 11th to the 16th century. The show will allow visitors to discover similarities of knightly traditions in these different parts of the medieval world and spotlight the extraordinary cultural exchanges originating from key meeting points such as Southern Spain, Sicily and Syria. In keeping with the theme of Louvre Abu Dhabi’s current cultural season Changing Societies, the exhibition highlights key artworks and artefacts across different times and cultures. The show aims to visualise how historic circumstances have contributed to their production or, in turn, how these works now act as a witness to historic changes in the cultures that produced them. 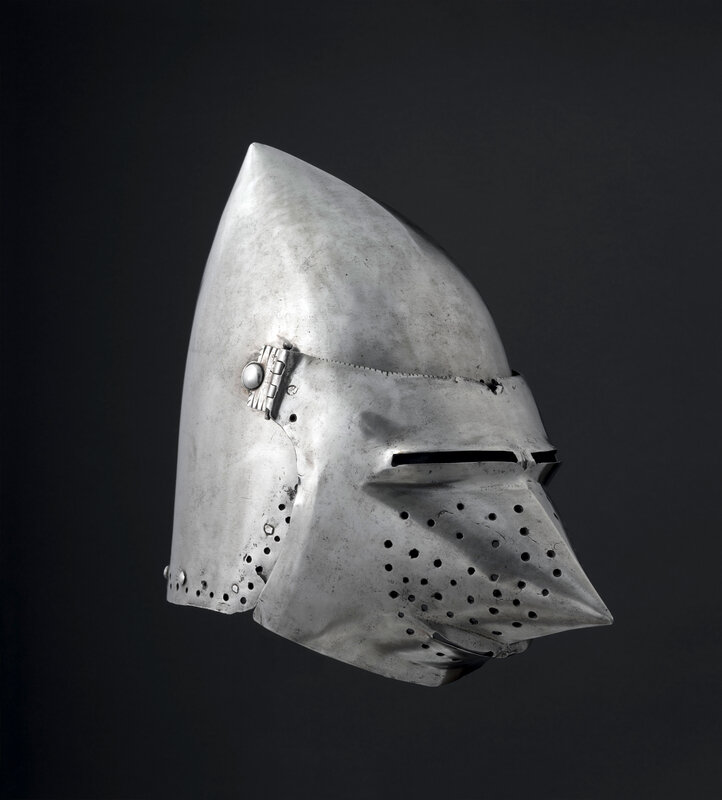 Manuel Rabaté, Director of Louvre Abu Dhabi commented: “Furusiyya: The Art of Chivalry between East and West is the perfect exhibition to take place at Louvre Abu Dhabi. Our home city has always been a gateway between East and West and is a natural stage for this exploration of a key moment in Arab history and its cross-cultural exchanges with the Western World. The many international partners for the show – be it lenders or scientific experts – highlight the importance of this subject within the academic community and we are incredibly grateful to Musée de Cluny, musée national du Moyen Âge, and our partners from New York, Dublin, Paris and beyond, who came together to make this show a first-of-its-kind.”

The curators of the exhibition, Dr. Elisabeth Taburet-Delahaye, Dr. Carine Juvin, and Michel Huynh commented: “The art of elite horsemen, called furūsiyya in the East and chivalry in the West, was born around the 8th-9th centuries, drawing from several common sources. The two cultures forged multiple links throughout the Middle Ages, many of which are still unknown today. Today, it is not only the objects related to battle, but also the values and ambitions, the substitutes and activities beyond the field of combat, the epics, novels and poems, combining stories of prowess and love, which are fascinating to compare. This show will not hide differences, but rather observe encounters between these two different cultures”.

Dr. Souraya Noujaim, Scientific, Curatorial and Collections Management Director at Louvre Abu Dhabi added: “This is a unique and original exhibition, bringing together medieval chivalric cultures of East and West. It builds on Louvre Abu Dhabi’s seasonal programme of exhibitions, evoking important moments in the history of art and society and further develops the connection between the permanent galleries and our temporary exhibitions.” Thanks to the generous loans of the Musée de Cluny, musée national du Moyen Âge and ten other prestigious international institutions, the exhibition offers an innovative synthesis between two worlds that had never been compared. Objects and images which have been carefully chosen are taking up the challenge to tell a secular story, which is not only one of confrontations but also of encounters and shared cultures.”

Upon entering the exhibition, visitors will be presented with two monumental horse armours, Louvre Abu Dhabi’s spectacular Ottoman Horse Armour from the late 15th century, installed alongside a European Horse and Knight Armour from the first quarter of the 16th century, on loan from Musée de l'armée. Both aim to immerse the visitors into the key themes throughout this exhibition – knights and their horse as well as the art of battle and knightly culture. Visualising the emergence and development of furusiyya in the East and its early encounters with chivalric culture in the West, the first section of the exhibition traces the emergence of this cultural phenomenon back to antiquity. Artefacts such as the cameo from the collections of Bibliothèque Nationale de France depicting the Fight between Emperor Valerian and King Shapur from as early as 260 A.D. are symbolic for the theme of the exhibition in showcasing the encounter of an Eastern and a Western warrior. A Horseman’s bowl on loan from Musée du Louvre from ca. 10th or 11th century Iran – one of the earliest depictions of an Islamic horseman - highlight key motifs such as the armed man on horseback, employment by a king as well as ‘knightly’ values such as courage, strength and service. The second section of the exhibition will allow viewers to discover objects around knightly combats and the art of battle, such as attack and defence armaments and equipment worn by the warrior’s horse. Educational manuscripts on war and fighting techniques were common in both cultures and the juxtaposition of an Arabic Kitāb al-makhzūn jāmiʿ al-funūn (The treasure that combines all arts) from Bibliothèque Nationale de France with a French Combat Treaty from Musée de Cluny, musée national du Moyen Âge, allow visitors to understand similarities and differences of approaches to fighting and battle. A variety of battle helmets and knightly armour from the Ottoman Empire, Egypt and Europe, alongside several depictions of battling warriors in illuminated manuscripts and carved reliefs, will contribute to the visitor’s understanding of knightly fashion at war. The Turban Helmet of Sultan Bajazet II from Musée de l’Armée, shown alongside a Western Bascinet from Musée de Cluny, musée national du Moyen Âge, give an idea of the different modes of defence, adapted to different arms and fighting techniques, across both cultures. The final section of the exhibition will trace the development of a knightly culture and their similarities in the Western and Islamic worlds. From pastimes such as falconry, jousting, horseback parades, to hippology (the study of horses) and chess, objects on show will highlight their cultural touchpoints between East and West. A 14th century Parisian carved Case with Courteous Novel Scenes from Musée du Louvre, showcasing a jousting tournament and other courtly activities, as well as a manuscript from Bibliothèque Nationale de France showing the Delivery of the chess game board by the King of India envoys from 15th century Iran speak about knightly life at the court and further illuminate the different manifestations of chivalric culture between the Middle East and Europe. The exhibition will be accompanied by an extensive cultural programme, curated by Ruth MacKenzie, looking at contemporary culture through the lens of medieval traditions and vice versa.

The work of Egyptian contemporary artist Wael Shawky explores the Crusades from the Arab point of view. Interrogating traditional historical narratives, based on Amin Maalouf’s Cabaret Crusadeshis large-scale musical theatre performance La Chanson de Roland (The Song of Roland) is based on a French epic poem from the 11th or 12th century France, glorifying the reign and conquests of Emperor Charlemagne and his nephew Roland. The work is staged by over 20 fidjeri singers and musicians from Sharjah and Bahrain, performing in the traditional style of Arabian Gulf pearl divers. Performances will take place in the Auditorium on 26 and 27 February at 8pm. Tickets are for 150 AED (including VAT) and are available online. A full family weekend will plunge visitors in the medieval times, with activations in the Park, under the Dome, film screenings, parades of knights, workshops and much more (28 and 29 February from 12pm to 6pm).

The renowned Trio Joubran has become eponymous with the oud, or Arabic lute. Coming from a long line of luthiers, the trio innovates in their performance and their instruments come together like three soloists who form one single voice. Their performance The Long March will be on show at the museum’s Auditorium on 26 March at 8pm. Tickets are for 150 AED (including VAT) and are available online.

Furusiyya: The Art of Chivalry between East and West will be on show at Louvre Abu Dhabi from 19 February – 30 May 2020, marking the third international exhibition in its 2019/20 cultural season Changing Societies.