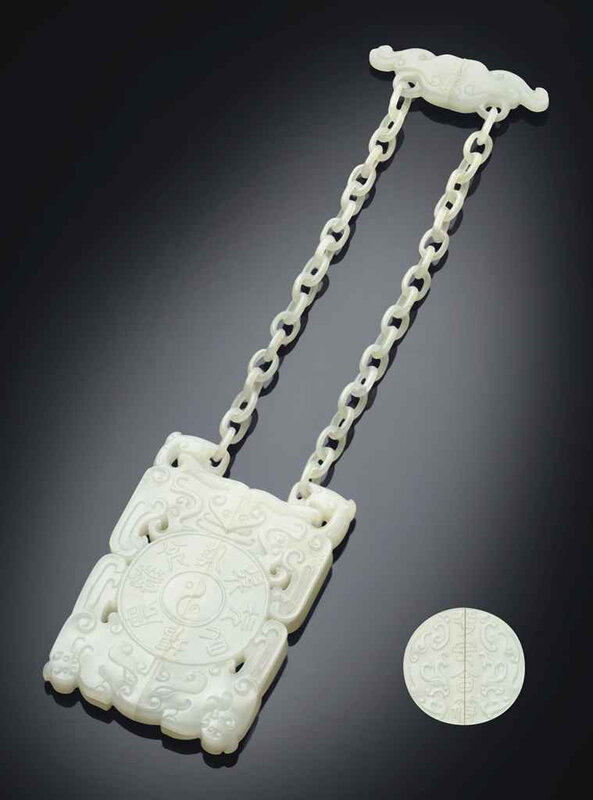 Finely carved as a locking two-part 'tally' of shaped rectangular form, each side centered by a roundel, that on one side centered by a yinyang symbol encircled by eight archaistic characters, the roundel on the reverse with four characters flanked by archaistic birds, carved at the bottom on each side with a taotie mask flanked by bats that form the lower corners while the upper corners are formed by archaistic birds, their beaks enclosing the bottom links of the two chains that are pendent from a shaped locking yoke carved in the center on each side with two different characters, all carved from one piece of semi-translucent jade of even white tone, box.

Tallies, also known as fu, have their origins in ancient China, and many of the earliest examples were fashioned from bronze in the form of tigers. Known simply as 'tiger tallies', they were crafted in two mirror pieces, and were used as methods of authentication or identification. One half would be held by a particular individual, and the second half by another, who would present the matching half as a means of assuring his or her identity or right to pass or enter. Tallies made from precious materials were typically reserved for individuals of the highest rank.

Compare a related white jade archaistic tally in the Qing Court Collection (fig. 1), illustrated in The Complete Collection of Treasures of the Palace Museum-Jadeware (III), Hong Kong, 1995, pp. 20-1, no. 16. While of a different shape, the illustrated example can be seen to lock in the same manner as the present 'tally'. See, also, the white jade archaistic 'tally' half from the collection of Stephen Junkunc, III, sold in these rooms, 17 September 2000, lot 592.