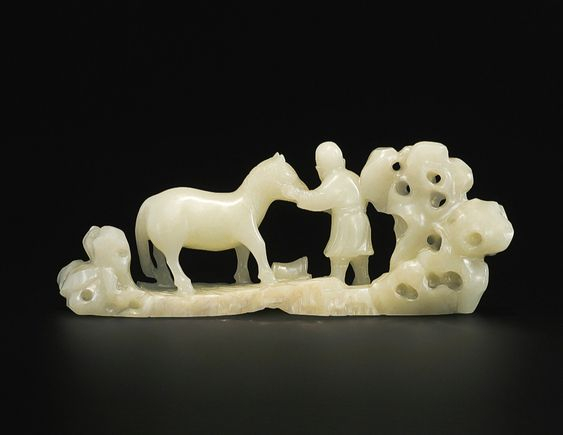 the group exquisitely carved in openwork to depict a bearded groomsman pulling the reigns of a horse standing foursquare, its saddle lying on a slab, the uneven ground surrounded by perforated rocky boulders, the stone of a smooth pale celadon color with some light russet colored inclusions.

Property from the Collection of Lolo Sarnoff.

Note: The groomsman deftly carved standing beside the horse, with its garments swaying in one direction as though being blown by the wind, all on an irregular rectangular base suggesting a natural landscape, appears to have derived its inspiration from Ming prototypes.  See one in the Asian Arts Museum, San Francisco, illustrated in Chinese Jades in the Avery Brundage Collection, San Francisco, 1977, p. 102, dated to the Ming dynasty, where it is discussed that Ming carvers were the first to sculpt these slabs into natural landscape settings such as rocks, tree trunks, waves of the sear or rivers, etc., and this constituted a turning-point in the development of Chinese jade carving.