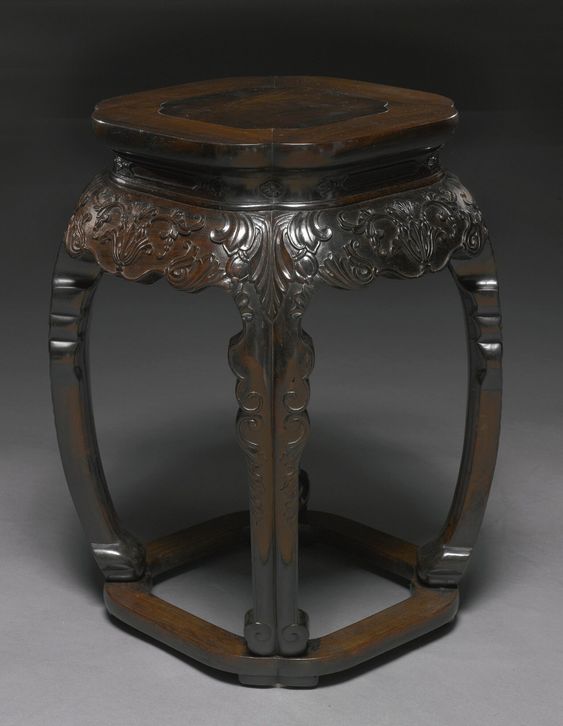 the solid top panel of quatrelobed section, above a narrow waist carved in relief with elongated, tasseled ellipses (CONFIRM), the shaped and beaded aprons superbly carved with symmetrical foliate and acanthus leaf scrolls centered on each side by a flowerhead issuing leaves and a further bloom, the design continuing in a delicate leafy scroll trailing down each of the four barbed convex legs joined by a conforming quatrelobed base stretcher.

Note: Exquisitely carved with an elaborate design of scrolling blooms and acanthus leaves displaying European and Mughal influences in its style and production. Furniture of this high quality was most likely created in the workshops of Suzhou or Beijing. Hu Desheng in A Treasury of Ming and Qing Dynasty Palace Furniture, Beijing, vol. 1, 2008, pp. 38-40, discusses the Suzhou-style (Sushi) and the Beijing-style (Jingshi) of furniture production, noting that the former was renowned for its beautiful forms, elegant lines, lucid construction, balanced proportions and intricate decoration, while the latter represented imperial furnishings made by artisans from Guangzhou working in the capital.

During the mid-18th century, European technology and design was much favored by the Qing imperial court. Jesuit artists were employed at the court to redesign the imperial palaces. The result combined a mix of Italian Rococo, French rocaille, and Mughal-inspired foliate designs as seen on the present table but tempered by a refined subtlety and balance intrinsic to the Chinese aesthetic. According to Tian Jiaqing in ‘Zitan and Zitan Furniture’, Chinese Furniture. Selected Articles from Orientations 1984-1999, Hong Kong, 1999, pp. 195-96, there are two main styles of zitan furniture: the smooth and scarcely-embellished Ming style, and the elaborate Rococo-inspired style of the Qing. The best of both styles are exemplified in form, joinery and surface decoration in the present piece.

Two stools of related form and decoration are retained in the Palace Museum, Beijing. One is illustrated in Zhongguo zhu mu ya jiao qi quanji 5: Jia Ju [The Complete Collection of Chinese Bamboo, Wood, Ivory and Rhinoceros Horn Volume 5: Furniture]. Bejing, 2009, no. 58 and the other in Tian Jiaqing, Classic Chinese Furniture of the Qing Dynasty, Hong Kong, 1996, no. 19.