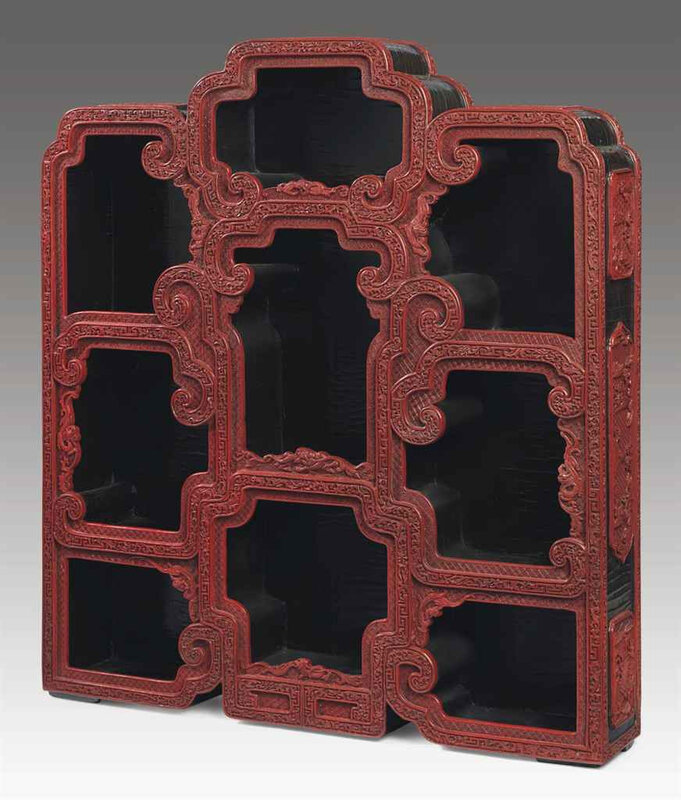 Of rectangular section with an angular scroll top, divided into nine symmetrically arranged compartments of different shape, each outlined by a diaper surround incorporating a sinuous dragon and raised scroll borders of foliate and angular scrolls, with black lacquer interiors, the back and sides also covered in black lacquer and applied on the top and sides with shaped red lacquer panels variously carved with landscapes, some including scholars and attendants.

Note: The display of beautiful, precious or exotic objects was a major part of the decoration in the imperial palaces during the Qing dynasty. These objects were usually displayed on stands of some type - be they integral with the piece or made especially for it. In some cases the object and its stand were simply placed on top of a table or chest, but in other instances a selected group of objects was displayed in an arrangement of display niches. These arrangements of cabinets ranged in size from huge banks of display areas, like the special display shelves which cover most of the wall in the Study of Fresh Fragrance in the Forbidden City, Beijing, to the tiny treasure cabinets made for the emperors' miniature pieces. A zitan cabinet from the Qianlong reign, with the same number of variously sized niches as the current red lacquer example - nine - is illustrated in Qing Legacies: The Sumptuous Art of Imperial Packaging, Museu de Arte de Macau, 2000, p. 127, no. 48.

Two slightly larger zitan, backless, display units can still be seen on either side of the large calligraphic panel in the emperor's private apartments at the back of the Hall of Mental Cultivation in the Forbidden City, ibid., pp. 18-19. On the adjacent and opposite walls of this chamber are more display shelves and cabinets as seen in Splendors of China's Forbidden City: The Glorious Reign of Emperor Qianlong, Field Museum, Chicago, 2004, p. 226, pl. 283. That this private chamber, to which the emperor could retire after dealing with affairs of state, still contains so many display units provides an indication of their popularity with the Qing imperial family.