A carved red lacquer 'Nine dragon' box and cover, Qianlong six-character incised and gilded mark and of the period (1736-1795)

A carved red lacquer 'Nine dragon' box and cover, Qianlong six-character incised and gilded mark and of the period (1736-1795) 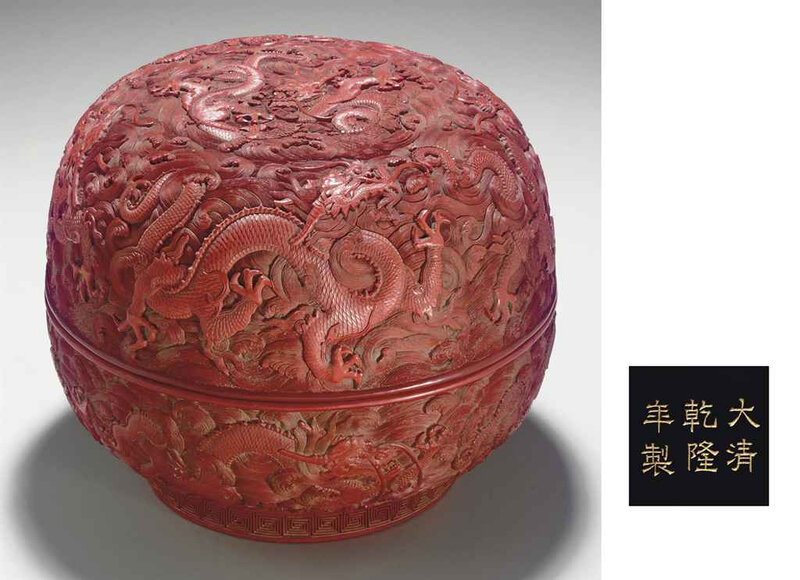 The top well carved with a writhing three-clawed dragon encircled by four other dragons striding amidst churning waves, the sides of the box similarly decorated, the details of the waves and scales finely rendered, all supported on a key-fret-incised foot, the interior and base lacquered black, box.

Note: Boxes of this size decorated all over with a design of three-clawed dragons amid churning waves are relatively rare. It is more common to find boxes with a dragon enclosed within a circular panel surrounded by other dragons chasing flaming pearls. The lack of borders separating the elements of the design from each other lends a feeling of vitality and movement to an otherwise formulaic decoration. The way the waves are incised and layered, and the postures of the dragons add to the livliness of the design. A smaller box with a similar decoration of three-clawed dragons amidst churning waves in the collection of the Asian Art Museum of San Francisco is illustrated in Chinese Art in Overseas Collections - Lacquerware, Taipei, 1987, p. 157, no. 154. A square box and a cylindrical covered canister with similar dragon and wave decoration, but with borders enclosing the designs, in the Palace Museum, Beijing are illustrated by Chen Lihua (ed.) in Carved Lacquerware, Beijing, 2008, pp. 244-6, nos. 166 and 167.