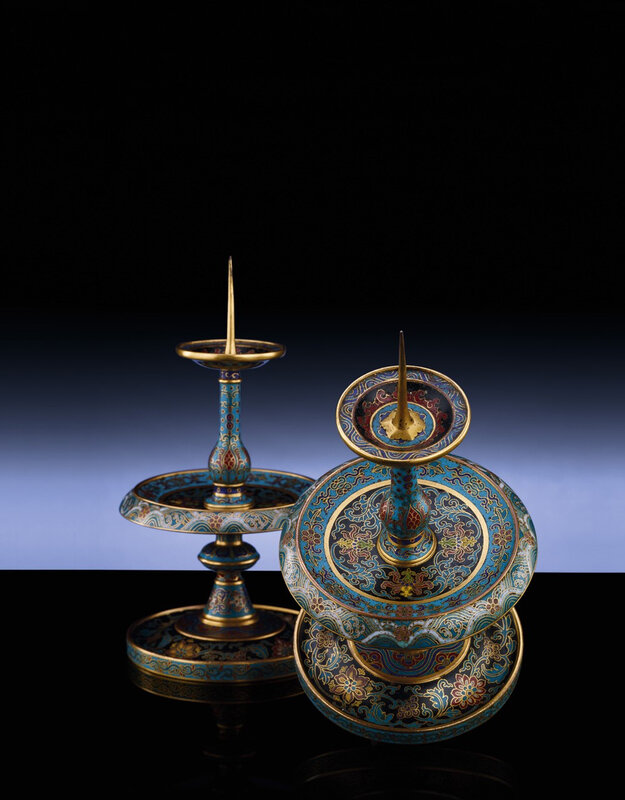 Each slightly domed disk base superbly enamelled with lotus scroll on a black ground encircling a smaller band of waves and stylised flowerheads around the central baluster-form shaft decorated with bands of detached flowerheads, foliate scrolls and pendant and upright lappets supporting a drip-pan, similarly decorated with lotus scroll on a black ground within stylised flowerhead and breaking wave borders, surmounted by a smaller drip-pan centred by the pricket.

Note: The colour combination on the present lot, with a black enamel ground, is unusual and found only on very few enamelled pieces. It, nevertheless, appears to have been favoured by the Yongzheng Emperor. A Yongzheng cloisonné enamel gui with a predominantly black enamel ground was sold at Christie's Hong Kong, 30 May 2006, lot 1288. See also, painted enamelwares from the early 18th century that are decorated with colourful enamels on a black ground: a Yongzheng-marked Beijing enamel censer and a hat stand, in the Palace Museum collection, both illustrated in Splendors of a Flourishing Age, Macao, 2000, nos. 63 and 64; a Yongzheng-marked winepot sold at Christie's Hong Kong, 27 October 2003, lot 727; and a Qianlong-marked tripod censer from the Stephen Junkunc III collection, sold at Christie's New York, 28 March 1996, lot 141.

A pair of 18th century cloisonné enamel candlesticks of the same form but with different decoration in the Pierre Uldry collection are illustrated by Binker and Lutz in Chinese Cloisonné: The Pierre Uldry Collection, New York, 1989, no. 280. Compare also with Qianlong-marked blue and white candlesticks of very similar form, bearing dated inscriptions, including one in the Special Exhibition of K'ang-hsi, Yung-cheng and Ch'ien-lung Porcelain Ware from the Ch'ing Dynasty, National Palace Museum, Taipei, 1986, illustrated in the Catalogue, p. 168, no. 141; and another illustrated by A. J. Pope, Porcelains in the Frick Collection, New York, p. 75, no. 65.8-144.