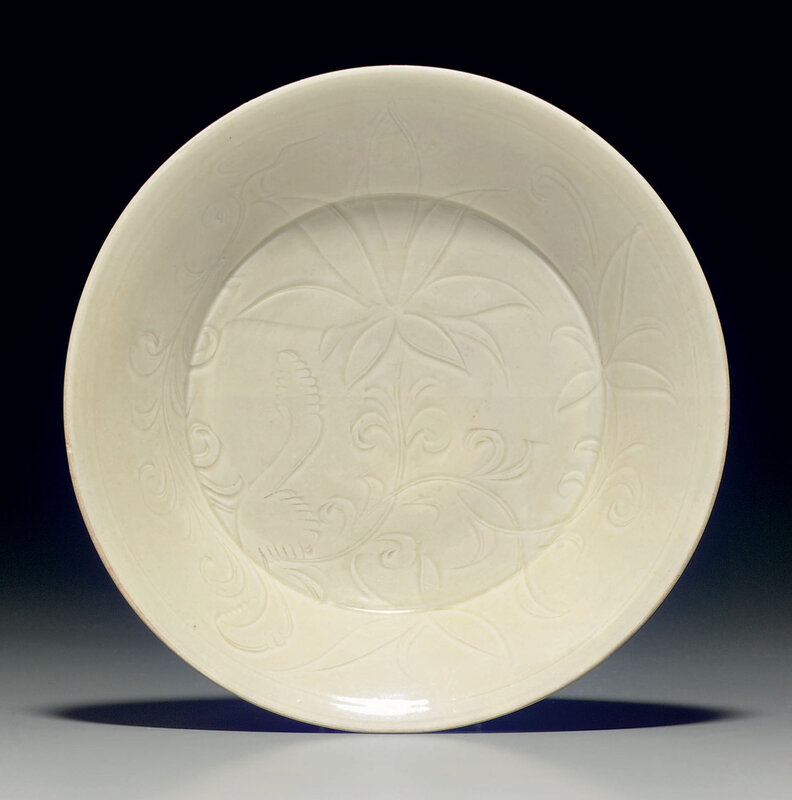 The body widely angled above the ring foot before flaring outwards to the rim, the interior expertly carved with leafy stems bearing three large lotus blossoms, all under a glaze of ivory tone falling in pale olive tears on the exterior and continuing over the neatly finished foot to cover the base.

Dr. William L. Corbin, like many prominent collectors, was a man of varied interests. His passion for gardening, shared by his wife Winifred, was evident to anyone visiting their home in the wooded hills of Portland, Oregon, where numerous pathways rambled amidst rare Japanese maples, flowering cherries, magnolias and conifers. Bill Corbin was also a collector and connoisseur of rare vintage wines. The legendary Michael Broadbent remembers him as one of the first American clients of Christie's wine department when it was formed in 1966, and we were pleased to include his fine wines in Christie's "Millennium Sale" in May of 1999.

The Dr. and Mrs. William L. Corbin Collection of fine and rare Chinese ceramics and works of art, formed over four decades in the mid-twentieth century, is a ic example of American taste in Chinese Art. The Corbins carefully and methodically amassed an extraordinary group of pottery and ceramics from the Han dynasty (206 BC - AD 220) through the Qing dynasty (1644 - 1911). Buying from auction houses, dealers and collectors worldwide, Bill corresponded with renowned specialists and other like-minded collectors, including Sir Harry Garner, Sir Percival David, Edward T. Chow, Lawrence Sickman, Avery Brundage, John Ayers, Sir John Figgess, Roger Bluett, Myron and Pauline Falk, Helen and Eugene Bernat, and many others. Exchanging news of recent purchases and scholarly discoveries, they formed long-standing friendships and a worldwide fraternity of passionate connoisseurs of Chinese art.

The Corbins welcomed into their home all with a serious interest in the field, Bill enjoying both the exchange of views with the connoisseur and the mentoring of the aspiring collector. At each visit to their tree-shaded hilltop house, just one or two select pieces would be removed from a display case in the "porcelain room" or brought out of storage for examination and appreciation. There would be lunch or dinner, accompanied by a choice wine from the Corbin cellar, the table often adorned with a piece from the collection displaying an arrangement from the garden. One particularly significant visit was that of Dr. T.T. Tsui, the late prominent Hong Kong collector and philanthropist. Bill had heard of the T.T. Tsui Museum in Hong Kong, and the T.T. Tsui Galleries at the Art Institute of Chicago, and the Victoria and Albert Museum, and was delighted to show his ceramics to this influential member of the new generation of enthusiastic collectors of Chinese art.

It is with great privilege that Christie's is able to offer the Dr. and Mrs. William L. Corbin Collection. Through the wide range of material offered, with its impeccable and long-standing provenance, collectors representing a variety of tastes and interests will have an opportunity to acquire rare porcelains and works of art from this renowned collection, thereby passing along the tradition of connoisseurship and scholarship so treasured by Bill and Winifred Corbin.

Note: A smaller (16.5 cm.) Dingyao dish carved with a similar design of freely scrolling lotus was included in the exhibition, Ting and Allied Wares, Percival David Foundation, London, 1980, no. 36, where it was dated 12th century. Unlike the present dish, the David dish bears an inscription and date reading, Shaoxing Yonghe Shu jia zao, 'Made by the Shu family of Yonghe in the Shaoxing period' (1131-62). Another Dingyao dish of smaller size (16.6 cm.), with similar carving, is illustrated by R. Krahl, Chinese Ceramics from the Meiyintang Collection, vol. 1, London, 1994, p. 205, no. 362.