A very rare imperial yellow-glazed dish, Chenghua six-character mark in underglaze blue within a double circle and of the period

A very rare imperial yellow-glazed dish, Chenghua six-character mark in underglaze blue within a double circle and of the period 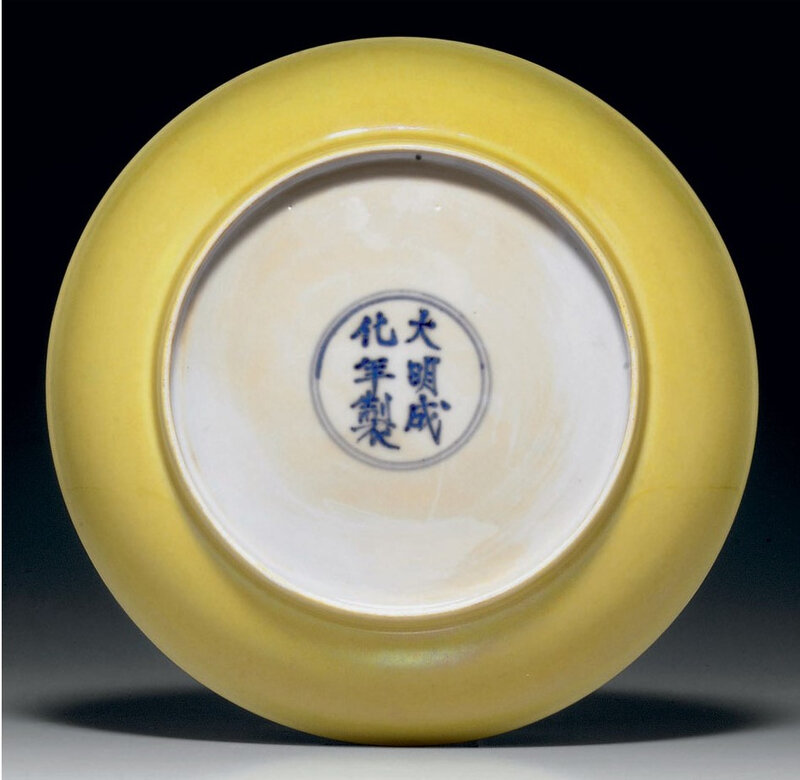 Raised on a slightly tapered foot ring, with shallow rounded sides, covered all over in a glaze of lemon-yellow tone, the convex base glazed white, box.

Note: This beautiful dish has a particularly fine yellow glaze, or, more precisely, a fine yellow enamel, since the piece had already been fired before the yellow was applied. Few Chenghua yellow dishes have survived in collections. A Chenghua yellow dish from the collection of the Palace Museum, Beijing, is illustrated in The Complete Collection of Treasures of the Palace Museum - 37 - Monochrome Porcelain, Hong Kong, 1999, p. 39, no. 35 (Fig.1). Four Chenghua yellow dishes are illustrated in Catalogue of the Special Exhibition of Cheng-hua Porcelain Ware, Taipei, 2003, pp. 107-9, nos. 90-93. Of these, only one is of similar form to the current dish, no. 92. Two yellow Chenghua dishes are in the Percival David Foundation, one of these (PDF 596) is of the same shape and only fractionally smaller than the current dish. The other (PDF A515) is significantly smaller and has an everted rim, in contrast to the straight rim of the current dish.

While yellow-glazed porcelains increased in popularity in the Chenghua reign, and yellow bowls, dishes and cups are reported to have been found in the excavations of the Chenghua strata at the imperial kilns, only one yellow bowl from the excavations appears to have been published. See The Emperors Broken China: Reconstructing Chenghua Porcelain, London, 1995, p. 82, no. 108. Two Chenghua yellow-glazed bowls have been published from the collection of the National Palace Museum, Taipei. One, with a diameter of 20.2 cm., appears in Ming Chenghua ciqi tezhen, Taipei, 1987, no. 19, while the other, fractionally larger at 20.6 cm., appears in Catalogue of the Special Exhibition of Cheng-hua Porcelain Ware, op. cit., no. 89.

Yellow glazes, like that on the current bowl, flourished during the Ming dynasty, and are particularly admired by connoisseurs. The rich yellow glazes first became established on porcelain vessels in the early Ming, but surviving examples are rare, and it is only from the Xuande reign onwards that significant numbers have survived. It is noticeable that the yellow glazes on Xuande porcelains are generally thinner than those on the porcelains of the Chenghua reign. The beautiful current dish, with rich yellow glaze inside and out, is a fine example. The color of this glaze is sometimes called jiyouhuang, 'chicken-fat-yellow', in China, and it is a low-firing glaze, which owes its color to small amounts of iron oxide. One of the other Chinese names for this yellow glaze is jiao huang, which can be written using two different Chinese characters for jiao. One means 'elegant', but the other means 'poured'. This latter name provides a clue to the way in which the yellow glaze was applied to the vessel, suggesting that it was poured onto the vessel. This is unusual, since the majority of such glazes were applied by dipping the porcelain into a vat of glaze slurry.

In order to achieve greater clarity and a better color, some modern scientists have suggested that the finest yellow glazes were fired at a slightly higher temperature than the other yellow glazes. There were two ways of applying yellow glazes to porcelain. They were either applied directly to the pre-fired body, and fired again at a lower temperature, which tended to produce a warmer color, or the yellow was applied on top of a normal high-fired porcelain glaze, which tended to give a slightly fluid appearance, and more even coloration. The attractive yellow of the current dish appears to have been applied by the latter method.

Commentaires sur A very rare imperial yellow-glazed dish, Chenghua six-character mark in underglaze blue within a double circle and of the period