Titian’s epic series of large-scale mythological paintings, known as the 'poesie', will be brought together in its entirety for the first time since the late 16th century at the National Gallery next March.

From the original cycle of six paintings, the exhibition will reunite 'Danaë' (1551–3, The Wellington Collection, Apsley House); 'Venus and Adonis' (1554, Prado, Madrid); Diana and Actaeon (1556–9) and Diana and Callisto (1556–9), jointly owned by the National Gallery and the National Galleries of Scotland; and the recently conserved 'Rape of Europa' (1562) from the Isabella Stewart Gardner Museum, Boston.

Following its landmark decision to lend works on a temporary basis for the first time in its 119-year history, the Wallace Collection will lend its painting from the cycle, 'Perseus and Andromeda', (1554–6), to the exhibition in Trafalgar Square.

The National Gallery’s own Death of Actaeon (1559–75), originally conceived as part of the series, but only executed much later and never delivered, will also be displayed in London.

Painted between about 1551 and 1562 the 'poesie' are among the most original visual interpretations of Classical myth of the early modern era and are touchstone works in the history of European painting for their rich, expressive rendering.

The paintings depict stories from Classical mythology, primarily drawn from the Roman poet Ovid’s 'Metamorphoses'. Because he considered them visual equivalents to poetry, Titian called them his ‘poesie.’ He distilled in them the knowledge of painting and visual storytelling that he had acquired over five decades as an artist to create some of his most profound statements on human passion and irrationality, on love and death. The series was commissioned by Philip II of Spain, who highly unusually gave Titian an open brief to select his subjects.

Letters between Titian and Philip show that he conceived the 'poesie' to be displayed together in a single room but, since Philip was constantly changing residence during the course of their creation, it is unlikely that the patron was thinking of a specific destination for the group. The paintings are a prime example of a great artist in rare concert with a sensitive patron, continuing to grow and deepen his artistic outlook into his older years.

The commission was a turning point in Titian’s career. It provided him with an opportunity to deepen his skills at staging complex narrative, handling difficult and ambiguous emotion, and painting expressively to appeal to all five senses.

Shortly after finishing 'Diana and Actaeon', Titian began on a sequel for Philip showing the story’s tragic conclusion: The Death of Actaeon. Although he originally conceived this picture as part of the series, he never sent it to Phillip. He worked on it later, probably in the 1560s or early 1570s, but we do not know for whom. It may have remained in his studio until his death in 1576. 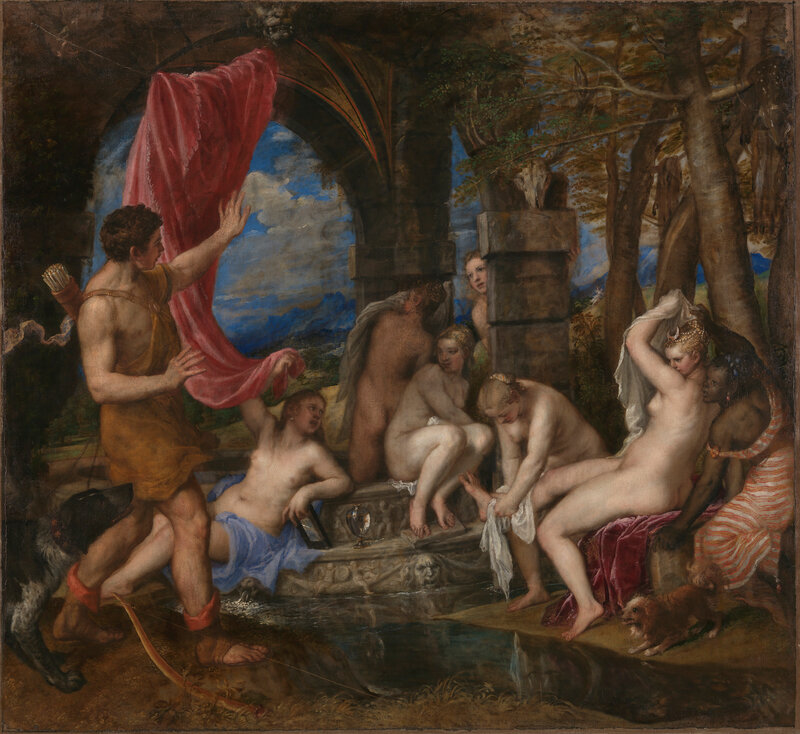 The artist was already known for mythological paintings that set animated groups of figures in idyllic landscapes. His breakthrough work in this genre was the dazzling set of pictures he made for Alfonso d’Este, Duke of Ferrara, which included Bacchus and Ariadne (1520–3) now in the National Gallery.

Of Titian’s six great 'poesie' for Philip II of Spain, only two remained in Madrid, Spain: 'Danaë' and 'Venus and Adonis'. 'Danaë' remained longer, but was taken by Joseph Bonaparte in 1813 and seized by Wellington in the Battle of Vitoria, after which it came to England. 'Venus and Adonis' was also in England, as Titian sent it to Philip when he was in London, having just married Mary Tudor (1516–1558). The other four, 'Perseus and Andromeda', 'Rape of Europa', 'Diana and Callisto', and 'Diana and Actaeon', plus the unfinished 'The Death of Actaeon', passed by different routes into the collection of Philippe II, Duc d’Orléans (1674–1723). When this collection was auctioned in London in 1798, the five 'poesie' were divided but remained in British collections throughout the 19th century. 'Perseus and Andromeda' was unsold at the first sale, and then changed hands before being sold at the second Duc d’Orléans sale in 1805. All the 'poesie' have, therefore, been in the UK at some point, and 'Perseus and Andromeda' several times, first when Van Dyck brought it to London some time after 1623.

The outstanding quality of the 'poesie' inevitably attracted offers from wealthy collectors abroad and in 1896 the 'Rape of Europa' was sold to Isabella Stewart Gardner for her collection in Boston, USA . However, 'Perseus and Andromeda' was secured for Britain the following year as part of the Wallace Collection bequest. In 1972, when 'The Death of Actaeon' was offered for sale, the National Gallery successfully purchased the painting with the help of government funds and following a nationwide public appeal. In 2009, the National Gallery and the National Galleries of Scotland jointly acquired 'Diana and Actaeon'; and in 2012, 'Diana and Callisto', securing the last two of these masterpieces for the public. 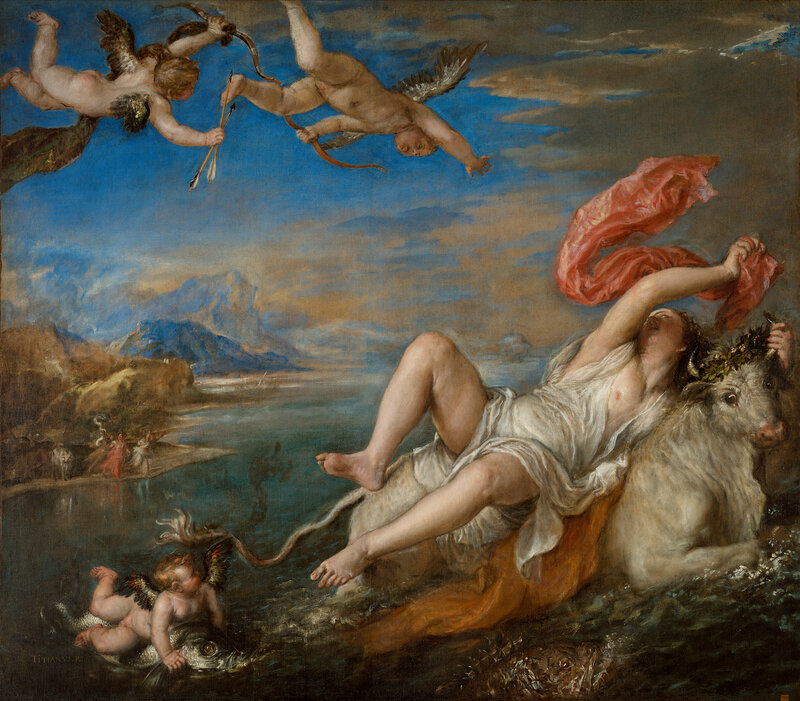 Dr Matthias Wivel, Curator of 16th-Century Italian Paintings at the National Gallery, and curator of 'Titian: Love Desire Death', says: 'For many lovers of painting, this is the realisation of a dream once thought impossible. The paintings are so powerful individually that I find it hard to overestimate the effect, finally, of seeing them together.'

Dr Gabriele Finaldi, Director of the National Gallery, says: 'Unthinkable until today, for the first time in over four centuries, now thanks to the Wallace Collection’s loan of the Titian 'Perseus and Andromeda', all of the artist’s late ‘poesie’ mythologies will be seen together.'

Matthew Moore, President and Managing Director, Liberty Specialty Markets, says: 'We are proud to be supporting the exhibition. We are one of the leading global providers of specialty insurance cover for Fine Art and Specie collections. We understand how important it is to preserve and care for these pieces of history so that we can enjoy them and so can future generations. This is a once in lifetime opportunity to be able to see all six paintings in one place and I am very much looking forward to enjoying them.'

The exhibition is curated by Dr Matthias Wivel, Curator of 16th-Century Italian Paintings at the National Gallery, London.