LONDON.- Sotheby’s Orientalist Sale, now in its ninth season and held during Islamic week, brings together paintings representing the landscapes, people, and customs of North Africa, Egypt, Arabia, the Levant, Persia, and the Ottoman world during the 19th and early 20th centuries. Comprising 57 lots, the sale provides a unique window into a realm that has forever changed, capturing in technicolour detail every aspect of life in the region. The auction will take place in London on 31 March at 3pm GMT, to be followed by Important Works from the Najd Collection, Part II, at 5pm.

Persia
The sale includes a rare group of four drawings by Jules Laurens that are as striking for their documentary importance as for the story of their survival of one of the most extraordinary and dangerous expeditions ever undertaken by a European artist-traveller.

In the spring of 1846, the thirty-three-year-old artist was given the break of a lifetime: the chance to join a geographical expedition to Persia led by Hommaire de Hell, a renowned geographer and engineer. Their journey was long and arduous – they spent up to fourteen hours a day in the saddle, overnighted in uncomfortable conditions, and battled cholera, fever, freezing temperatures, and snow blindness. Despite all these impediments, Laurens assiduously recorded his impressions in his sketchbook at every stop.

In February 1848 the two explorers reached Tehran where they were greeted by the French envoy to Persia who introduced them to the court of King Mohammad Shah Qajar. Early the following month, the pair left Tehran on foot for Isfahan on what became their last journey together, on which they walked by night to escape the inescapable heat. Upon their arrival, Hommaire de Hell’s health deteriorated; he died on 30 August and was buried in present day Azerbaijan.

Of the hundreds of sketches Laurens made during his three-year journey, many were turned into lithographs on his return, for printing in popular magazines and publications. A portion of the original watercolours and drawings were given to the library of the École des Beaux-Arts in Paris. The appearance on the market of these four works from a private collection, marks the first time such an exceptional group has come to auction at the same moment. Captured in minute photographic detail, this tranquil scene shows a Nubian guard awaiting the hour of prayer outside a Cairene mosque. Seated on an Ottoman mother-of-pearl inlaid calligrapher’s chest, and with a flintlock gun in hand, the guard’s iridescent green silt gown mirrors the jade green incense holder beneath the large copper incense burner. The subject of Arnauts – the mercenaries employed by the Ottoman army – was of particular interest to Gérôme, pervading his work from the late 1850s onwards. In this painting, last offered at auction fifty years ago, the Arnaut is glimpsed off guard in a moment of reflection. Like many of his fellow Orientalist painters, Wilda travelled to Egypt in the early 1880s and set up a studio in Cairo where he developed a keen interest for the depiction of everyday Egyptian life. This rare and important painting is by one of the few female Orientalist painters active in the nineteenth century. The harem was a sophisticated social space inaccessible to male eyes, and therefore so often the subject of hackneyed, voyeuristic, depictions. By virtue of being painted by a woman, the picture provides a greater understanding of the workings of the harem. Henriette Browne, the English professional pseudonym of Sophie De Saux, accompanied her diplomat husband to Constantinople for a fortnight in 1860. Set in a minimalist interior, Browne’s painting depicts the visit of one harem to another. 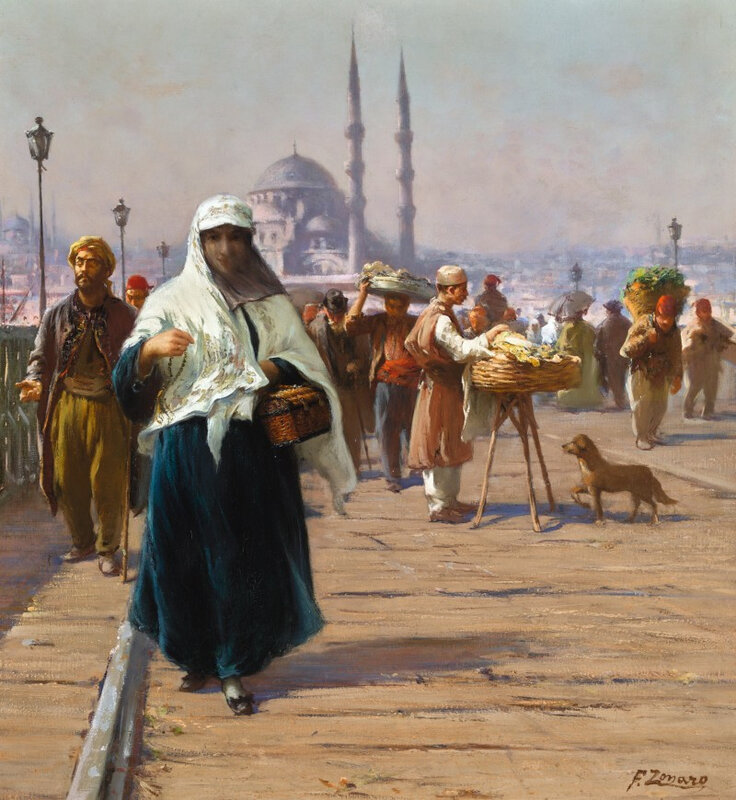 Zonaro’s view across the Galata Bridge spanning the Golden Horn, with the dome and minarets of the New Mosque beyond, has the qualities of a photographic snapshot of Constantinople’s bustling street life. The artist had moved to the city in 1891, and the last Ottoman sultan, Abdül Hamid II, appointed him painter to his court. Thanks to the sultan’s patronage, Zonaro was able to explore every corner of the city undisturbed, including religious festivals that would have otherwise been forbidden to him. Gudin’s painting of the Golden Horn predates the building of the Galata bridge, and takes in the majestic skyline of the Old City, including the New Mosque and the Süleymaniye Mosque in the distance. Bretagnier first visited North Africa at the end of 1884 where he remained until the following summer. Hugely influenced by what he found, he took to dressing in the local costume in order to mix more easily with the locals, sporting a djellaba and travelling by donkey. In this work, an Imam wearing an emerald green gown leads a group of men in prayer in the mosque of El-Kasbah in Tangier. Majorelle produced modern, rich, and colourful works which revolutionised the Orientalist tradition. Painted in 1940, this is one of seven works by Majorelle depicting the moussem (festival) in the port of Moula Dourein. The setting for Procession before a Kasbah appears to be Anemiter (or Anmiter) in the High Atlas mountains. As a native of Algiers, North Africa held a special place in Lévy-Dhurmer’s heart and was the source of inspiration for breath-taking views of which these two works are prime examples.