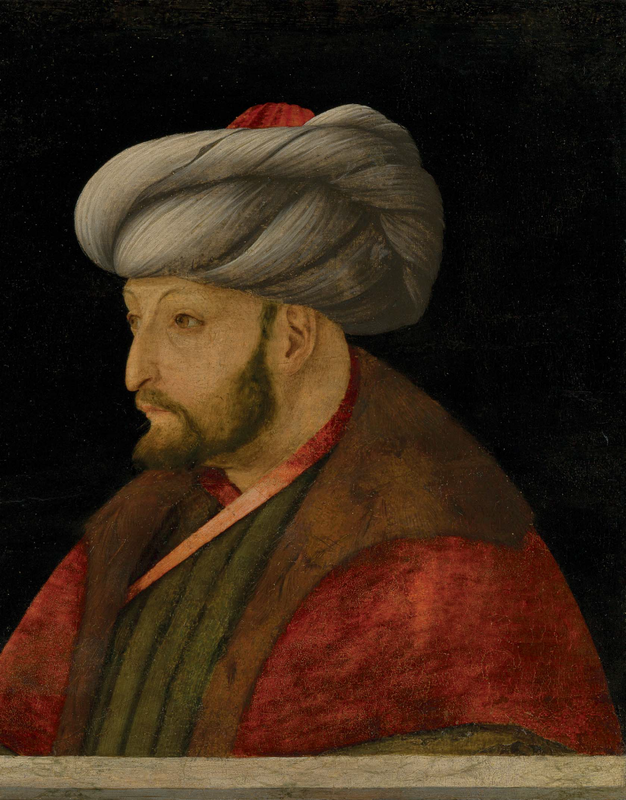 Note: This remarkable painting is one of only three surviving contemporary, or near contemporary, depictions of the Ottoman Sultan Mehmed II in oil and the last to remain in private hands. Furthermore, it is the only known portrait of the Sultan showing him with another figure. It documents the fascinating interaction between the East and West in the late-fifteenth century.

Mehmed II is widely acknowledged as one of the most significant figures in the history of the Ottoman Empire. Feared and respected in the Christian West, the ‘Grand Turk’ (as he was nicknamed) conquered Constantinople, the last bastion of the Byzantine (and thus historically Roman) Empire in 1453. This triumph caused alarm throughout Europe, which only increased as Mehmed continued to forcefully expand his Empire into former Byzantine territories in Greece and the Balkans, conquering lands as far west as Moldavia and Wallachia on the Danube. Aside from his ambitious expansion of Ottoman lands, Mehmed was known for his adept political knowledge and administrative talents. The Sultan founded an organised, regularised system of government, centralising his power and establishing relations between the feudal military nobility, the judiciary and the court. Mehmed promoted religious tolerance and fostered a burgeoning interest among Ottoman court circles in Latin, science and art. Despite the numerous tales spread concerning his cruel treatment of prisoners of war and his ruthless military ambition, the Sultan came to be perceived, in the West at least, as a typical ‘Renaissance’ prince.

A state of war was declared between the Ottoman Empire and Venetian Republic in July 1463, following raids by the Ottomans on several Venetian settlements along the Dalmatian coast and the capture of fortresses at Lepanto in 1462 and Argos in 1463. Venice, allied with Hungarian, Papal and Burgundian forces, initially made considerable advances into Ottoman lands between 1463 and 1466, capturing several key cities from their opponents. By the 1470s, however, the fortunes of the Venetians had begun to turn, with several decisive losses and the surrender of important cities. In 1479, the war was ended by the signing of the Treaty of Constantinople, which forced the Venetians to make major concessions, including the payment of a 100,000 ducat indemnity and the agreement to pay an annual tribute in return for maintaining trade rights and privileges in Ottoman territories. It was following the conclusion of this treaty that Mehmed requested that the Republic send a painter who knew ‘how to make portraits’, along with a sculptor and a bronze founder to visit his court. The choice of ‘Zentil belin optimo pintor’ (‘Gentile Bellini, an excellent painter’) for this purpose may have come on the recommendation of Giovanni Dario (1414-1494), an intimate friend of the artist and the diplomat who had negotiated peace talks in Istanbul - as Constantinople had been renamed following the Ottoman conquest. It is also possible that the Turkish ambassadorial embassy had seen Bellini’s ongoing works for the decoration of the Sala del Gran Consiglio of the Palazzo Ducale (destroyed 1577) and requested him specifically. The Bellini family had been established as Venice’s leading artistic family under Gentile’s father, Jacopo Bellini, and his younger brother, Giovanni, and were a dominant artistic force in the city. Gentile’s work at the Palazzo Ducale had essentially made him the official painter of the Republic.

Bellini travelled to Istanbul on 3 September 1479. His new patron had already developed extensive interest in and taste for Greek and Italian culture. Following his conquest of Constantinople in 1453, Mehmed had actively sought to preserve parts of the city’s Byzantine heritage as the New Jerusalem and the New Rome. He amassed, for example, a significant number of Christian relics in his palace and transported many of the Imperial porphyry sarcophagi from the Church of the Holy Apostles to the Sarayburnu on the Bosporus, the site of his Topkapi Palace complex. He also saved much of the Byzantine Imperial regalia from destruction. Mehmed had a fascination for Greek literature and is known to have studied the works of Ptolemy, and to have owned numerous Greek manuscripts. His interest in Western, Latin culture is equally well documented. The Sultan was well informed in Italian humanist ideas, which he would likely have encountered from Italian expatriates in Ottoman territories. The influence of Cyriacus of Ancona (1391-1452), a famed humanist and writer, was especially notable and the young Sultan is believed to have had daily lessons from a ‘compagno’ of Cyriacus’ on ancient Roman and early Italian history (not as sometimes claimed from Cyriacus himself; see Raby, 1987, p. 172).

Gentile Bellini’s time in Istanbul is, unfortunately, only documented anecdotally. The Sultan appears to have kept the painter and the two assistants who accompanied him busy with commissions. As recorded by Giacomo Filippo Foresti da Bergamo (1434-1520) in his 1491 Supplementum chronicarum, Mehmed requested Bellini to ‘paint a great many marvellous and extraordinary paintings of himself and almost countless other subjects’ and, following these successes, ‘required that he [Mehmed] himself be rendered in his own form. And when the emperor beheld the image so similar to himself, he admired the man’s powers and said that he surpassed all other painters who ever existed’ (quoted in Chong, 2005, p.108). Despite this wealth of patronage, the only known extant painting made during Bellini’s time at the Ottoman court is the portrait of the Sultan now in the National Gallery, London (fig. 1). The Sultan had probably been painted previously by the Venetian artist, later active in Naples, Costanzo da Ferrara (c. 1450-after 1520) who had travelled to Istanbul in circa 1474. Though no such painting survives, Ferrara did produce a bronze medal with the Sultan’s likeness in 1481, shortly after Mehmed’s death (fig. 2; New York, Metropolitan Museum of Art). Medal portraits were typically favoured by Italian rulers, something which surely inspired Mehmed’s interest in such objects, probably initially prompted by Pisanello’s medal of the Byzantine Emperor John VIII Palaiologos, which the Sultan would have seen in the Imperial Treasury after the fall of Constantinople (c. 1438-9; London, British Museum). Aside from Costanzo da Ferrara’s example, portrait medals depicting Mehmed are known to have been made, or designed, by a follower of Pisanello (c. 1460s-70s; Oxford, Ashmolean Museum), Gentile Bellini (c. 1480; London, Victoria and Albert Museum) and Bertoldo di Giovanni (c. 1480s; London, British Museum). While these show the Sultan in full-profile, Bellini’s portrait in the National Gallery, London, employed a more fashionable style, adopted from Netherlandish prototypes by painters like Rogier van der Weyden and Hans Memling, depicting the sitter in three-quarter-profile. In addition to the present work, the London portrait informed other images of the Sultan, including a watercolour of circa 1480 by a Turkish painter showing Mehmed II smelling a Rose (or the ‘Sinan’ Portrait), which closely copied the head, but expanded the composition to show the Sultan seated, a conventional trait of Ottoman royal portraiture (fig. 3; Istanbul, Topkapi Palace). 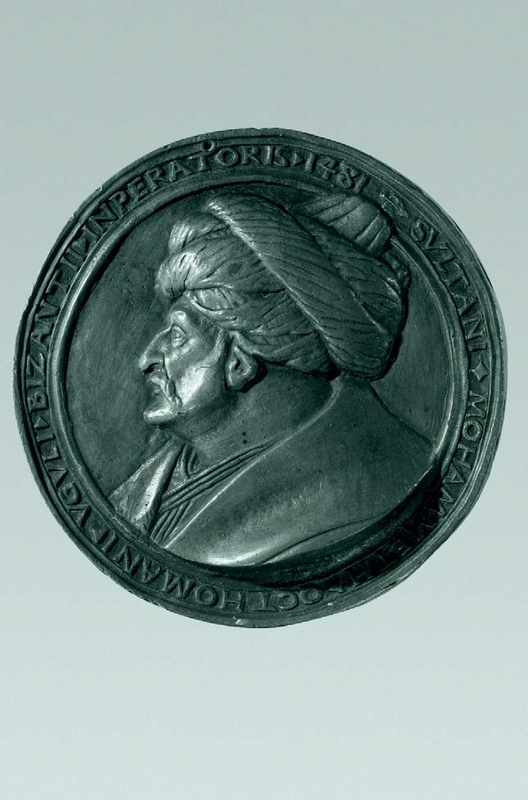 The depiction of Mehmed II in this double portrait relied closely on the National Gallery picture, though small changes were made to the fall of the sitter’s robes and the Sultan is given a slightly fuller face. The inclusion of a second figure, however, is unique amongst known European depictions of Mehmed. Despite numerous attempts at discovery, the young man’s identity remains unknown. An old label, formerly attached to the reverse of the panel, probably dating from the eighteenth century, recorded that the picture depicted a ‘Ritratti di Maometto / secondo é di suo figlio / di Gentile Bellino’ (‘Portrait of Mehmed II and his son by Gentile Bellini’; see Babinger, 1961, pl. IV, fig. 8). Mehmed II had three sons, but none can be convincingly identified with the sitter here. By 1479, the Sultan’s second son, Mustafa (c. 1450-1474), had been dead for several years and both his eldest son, the future Bayezid II (1447-1512), and youngest son, Prince Cem (1459-1495), were away from court, on official postings in Anatolia. Furthermore, Bayezid would have been thirty-two at the time Bellini painted his father’s likeness and therefore too old to be the young man depicted here. Ottoman court etiquette would have demanded that anyone placed in this privileged position of equality with the Sultan be either a relative or a close favourite. While this is possible, it is more likely that the double portrait was commissioned outside the Ottoman court where such strict decorum would have been easier to disregard. Indeed, though dressed in a turban, adorned with an aigrette (an indicator of high status), the young sitter’s sleeves are distinctive of the kind of gold-embroidered luxury velvets produced in Italy during the late-fifteenth century. His clean-shaven face too would have been very unusual in Islamic culture, but the norm in late-fifteenth century Europe. It is possible therefore that he might be European, possibly a Venetian merchant or diplomat who had connections with the Ottoman court and wished to commemorate his links with Istanbul.

After Mehmed’s death, his son, Sultan Bayezid II, embarked on a wave of zealous iconoclasm, selling the majority of the ‘foreign’ works of art commissioned or collected by his father. The pictures were sold in Istanbul’s market, possibly with the National Gallery portrait of Mehmed II amongst them. As such, it has been suggested that this portrait may have returned to Venice early in its history, remaining there until its purchase in 1865. The portrait may in fact always have been intended for a Venetian audience, with Peter Humfrey suggesting that it could have been a diplomatic gift from the Sultan to the Doge Christiansen and Weppelmann (eds.), exhibition catalogue, New York, 2011, p.55). The similarity of the Sultan’s portrait in the present work to that in the National Gallery suggests that the painter was certainly familiar with Bellini’s original, either through preparatory drawings, or the picture itself. Little is known of Gentile Bellini’s workshop practice though, as Humfrey has observed, it is likely that his large-scale works would have necessarily been painted with help from a workshop. He is known to have travelled to Istanbul in the company of two assistants and at the time of his death, Girolamo da Santacroce (1480/85-1556) is recorded as working in the painter’s studio, from which Gentile bequeathed him a group of drawings, including some made during Gentile’s sojourn in Constantinople (Campbell, ‘The ‘Reception of the Venetian Ambassadors in Damascus’: Dating, Meaning and Attribution’, in Contadini and Norton (eds.), Farnham, 2013, p.122). At the time of the picture’s sale in 2015, Dr. Caroline Campbell dated the double portrait to the end of the fifteenth century, or early in the sixteenth, with Antonio Mazzotta observing that the simple, flattened portrayal of the sitters, and the elliptical folds of the drapery were consistent with techniques used in Bellini’s circle, suggesting that the painter was acquainted with his practice and working methods.