LONDON.- The sale will offer thirty-five beautiful pieces from the collection of the late H. Peter Stern, an avid traveller who co-founded the Storm King Art Center – the world’s most important modern sculpture garden – and served as Vice Chair of the World Monuments Fund. His pursuit of a ‘global idyll’ is reflected in his collection, with Ottoman mounted panels of silk and velvet brocade and Mughal velvet tent hangings, adorned with floral motifs, sitting alongside delicate architectural Company School watercolours. Stern lived with these treasures in his home, Cedar House, in the lower Hudson Valley – eclectically decorated, as he mixed East and West, ancient and modern, intellectual, spiritual and cultural.

A further tranche of five pieces will be sold in New York on 22 June, as part of the India, Himalayan, Southeast Asian Works of Art sale.

Qanat panels provided an important element for the interior decoration of the Mughal court, moved around in the palaces and the tents of hunting parties. Emperor Jahangir’s passionate interest in botany permeated the court ateliers, and the pattern of a flowering shrub became one of the most popular motifs. 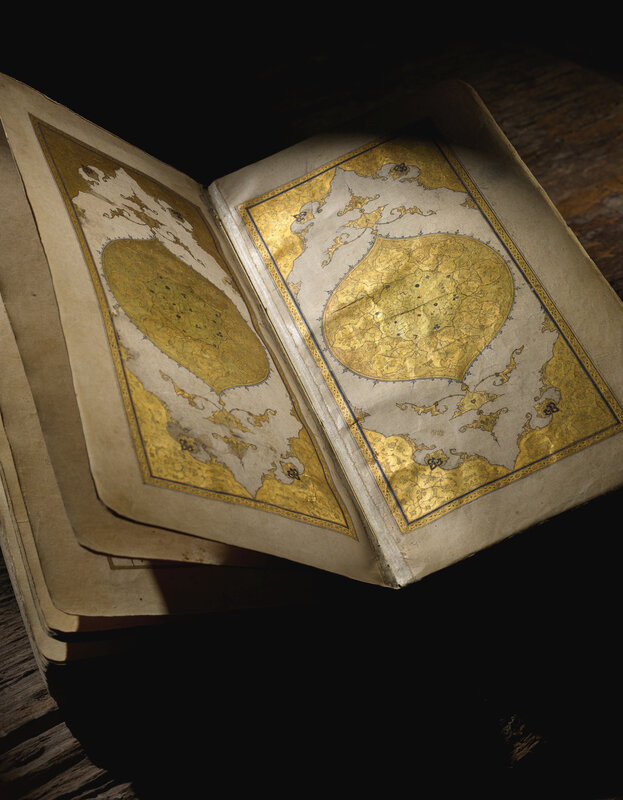 Persian manuscript on polished paper, 160 leaves plus 4 fly-leaves, 17 lines to the page, written in elegant nasta’liq in black ink, text divided into two columns, ruled in black and gold, headings in gold outlined in black, f.1b and 2a with a double-page spread of illumination consisting of a central panel in two tones of gold with a dedication to Pir Budaq, f.2b with an illuminated heading, f.160b with an illuminted finispiece in gold, blue and black, in a brown leather stamped and gilt binding.

This magnificent Persian manuscript is illuminated in gold on gold and bears a dedication to one of the most important patrons in fifteenth-century Central Asia, the Qara Qoyunlu prince Pir Budaq. Pir Budaq was the rebellious eldest son of the ruler, and was sent by his father to Iraq, taking with him a caravan of talented artists, scribes and master craftsmen in 1458. Whilst Governor of Baghdad, his flourishing court challenged his father’s authority, resulting in an eighteenmonth siege, and the death of the prince in 1466.

Numerous manuscripts dedicated to the keen bibliophile have survived in institutions and private collections today, and this previously unrecorded Diwan is an important witness to the grandeur that must have been his library.

Jafar Ghazi arrived in Europe from Iran at a young age, settling in Munich, where he housed a large library of manuscripts. When Ghazi died at the age of 86, a number of missing manuscripts was reported to the police. In 2011, a cache of 175 pieces were discovered, the most significant of which were sold at Sotheby’s in October 2016 and April 2017. The present, and arguably most important manuscript among the missing group, remained lost until January 2020 when it was finally rediscovered and returned to the family of the late collector. the fritware body painted in black under a turquoise glaze, with three calligraphic rows, the neck with vegetal bands, a row of stylised birds to shoulder, body with palmettes surrounded by multiple outlines, foliate motifs near base, linear handle.

This exquisite pitcher evidences the dramatic innovations in ceramic decoration by the end of the twelfth century in Persia, with the extraordinary complexity and freedom of its design. A layered series of motifs wraps around the turquoise body, integrating intricate palmette medallions with cursive inscriptions.

In the early 1940s, this piece was thought to have been discovered among a number of similar vessels that had been buried in large pottery oil-jars in Gurgan. They may possibly have been the supply of a merchant who had imported them from Kashan and hidden them for safekeeping on the eve of the Mongol invasions.

Originally published in 1949, the pitcher was previously exhibited at the Smithsonian Institute in Washington D.C. (1966-68), as well as the King Faisal Center for Research and Islamic Studies in Riyadh, Saudi Arabia (1985), it will now go on public view for the first time since then. 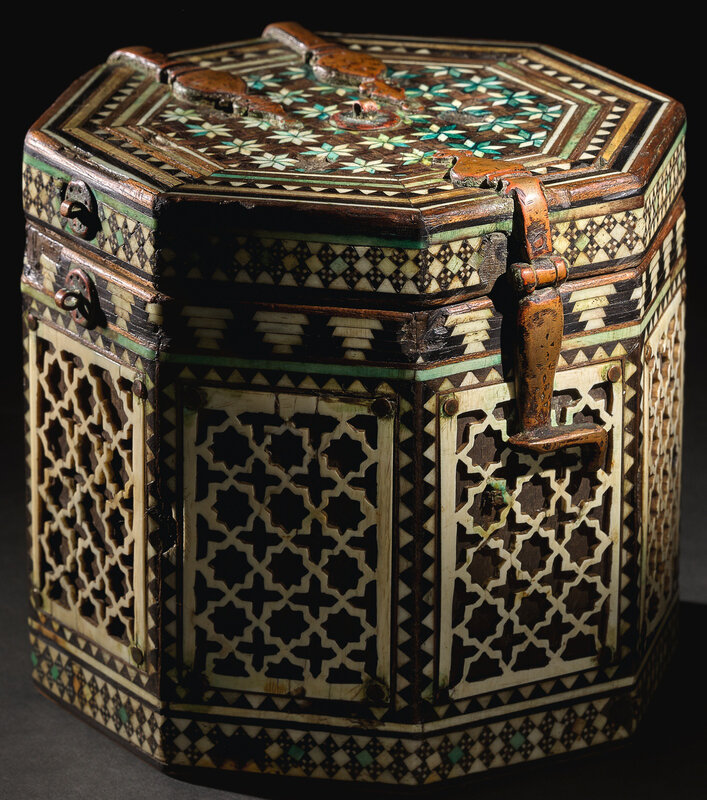 the hardwood (possibly walnut) octagonal body and lid overlaid with natural and blue-stained bone, the main fields of the body decorated with openwork ivory plaques with cross-and-star design and triangular patterned borders and micro-mosaic borders of chequered lozenges and ‘dentated merlons’, the base with an eight-pointed star, copper hinges and part of lock, lock-plate missing, circular copper plaques with ‘eyes’ on the body and lid, possibly originally threading with a cord.

One of the earliest manifestations of a decorative technique that is often associated with the medieval Muslim Mediterranean, this previously unpublished octagonal box is set to make its auction debut, having remained in the same collection since the 1970s. Artefacts from this period of al-Andalus’ history are rare and this piece joins a small group of woodwork dating to the late twelfth or early thirteenth century that used the traditional micro-mosaic, geometric incrustation. 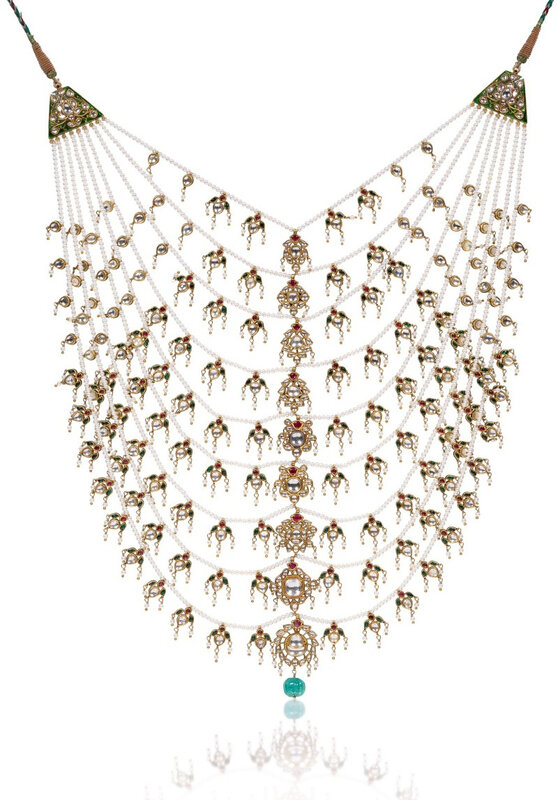 Featuring nine rows of pearls, each suspending delicately enamelled gemset pendants, culminating in a carved emerald bead, this statement necklace was crafted in India as European nobility clamoured for the latest crosscultural fashions. A closely comparable example was formerly worn by famous Egyptian singer Umm Kulthum and was recently exhibited at the Louvre Abu Dhabi. This piece is part of a wider selection that was once in the possession of an Indian maharani.