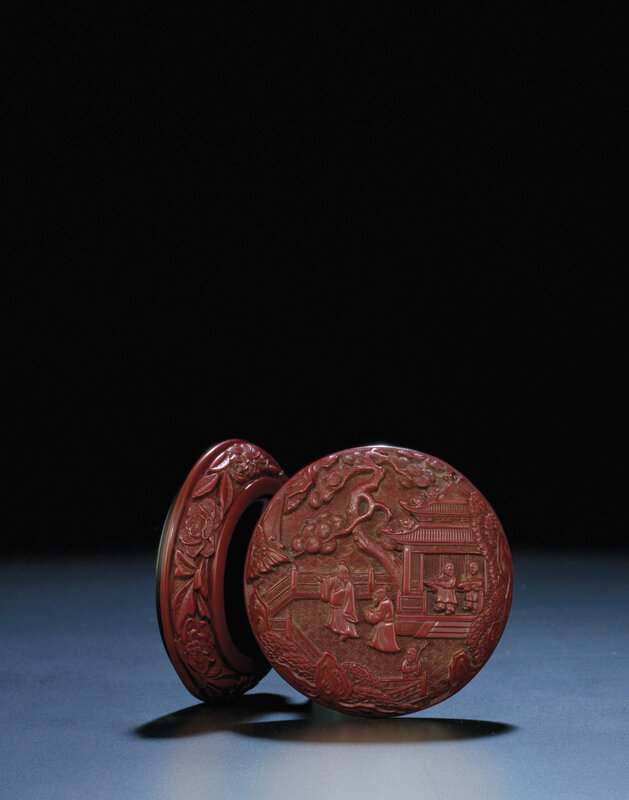 Exquisitely carved in deep relief to the domed upper surface of the cover with two scholars standing on a balustraded terrace beneath the gnarled branches of a pine tree admiring a waterfall set within the gardens beyond the fence, with three attendants standing nearby on the terrace and inside the pavilion, all set within lakeside gardens with leafy bushes emerging from ornamental rockwork, the side of the box encircled by a composite floral scroll above the black lacquered base inscribed with a Yongle six-character mark, the box core of metal, box

Note: While the rounded circular form is well-known among carved boxes of the Yongle period, it is very rare to find an example carved with a figural scene. A Yongle box of comparable size and form but carved with lychees rather than the figures found on the present box, is in the Beijing Palace Museum Collection, illustrated in Lacquer Wares of the Yuan and Ming Dynasties, The Complete Collection of Treasures of the Palace Museum, Commercial Press, Hong Kong, 2006, p. 74, no. 52. Yongle circular boxes and covers of varying sizes with straight sides and figural scenes depicted on the flat cover appear to be common and an example in the National Palace Museum was included in the exhibition Carving the Subtle Radiance of Colors, Treasured Lacquerware in the National Palace Museum, Taipei, 2007, illustrated in the Catalogue, p. 48, no. 28. Compare also a larger box carved with similar theme of a scholar admiring distant mountains, in the Palace Museum, Beijing, illustrated in Carved Lacquer in the Collection of the Palace Museum, Beijing, 1985, no. 65, dated to the early Yongle period; and a box included in the exhibition, 2000 Years of Chinese Lacquer, The Oriental Ceramic Society of Hong Kong, 1993, and illustrated in the Catalogue, p. 88, no. 40.