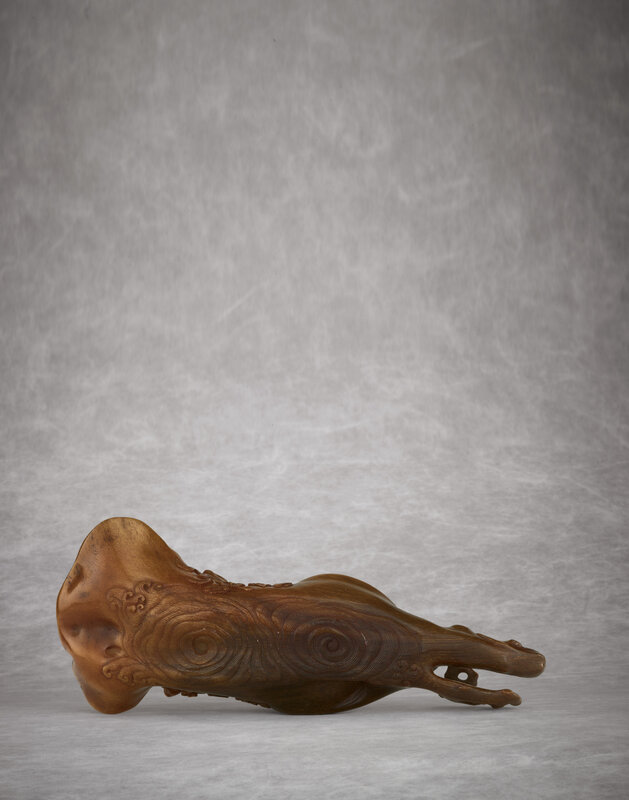 Finely carved as Zhang Qian floating down the Yangzi river in a hollowed log, carved on the base with swirling waves and tapering at the front into a curved spout sprouting emerging from waves crashing over the bow, the Han dynasty statesman holding a lotus stem in his right hand as he sits casually atop the naturalistic platform that spans the interior of the vessel beside a double-gourd, flanked by blossoming begonia and dianthus stems, of rich honey colour, wood stand.

Note: The figure on the raft is an idealised depiction of the Han dynasty imperial envoy and traveller, Zhang Qian. His travels were later embellished into legendary poems in which he is said to have travelled in search of the source of the Yellow River and found himself floating on the Milky Way ('River of Heaven') where he catches sight of the Weaving Maiden and the Cowherd, two mythical lovers separated by the Milky Way. The subject of this rhinoceros horn cup, Zhang Qian in his log boat, was a popular theme during the late Ming and early Qing periods and can be seen in other rhinoceros horn carvings of the period. This small group of around twenty examples of varying size and with different interpretations of the figure form one of the most complex and interesting forms of rhinoceros horn carving.

In order to achieve the unusual hollowed horizontal form, the horn would initially have been soaked to render the material pliable, then slit along the short side of the horn and hollowed out to form the receptacle. In the case of the present carving, a section of the side wall near the base has been cut and bent upwards to form the figure of Zhang Qian resting on a rockwork bridge and to act as a structural support to the walls of the vessel.

The Palace Museum in Beijing holds three examples of Zhang Qian raft vessels, all of which are illustrated in Bamboo, Wood Ivory and Rhinoceros Horn Carvings, The Complete Collection of Treasures of the Palace Museum, vol. 44, Commercial Press Hong Kong, 2002, nos. 118, 119 (see fig. 1) and 120. Several further examples from this group are illustrated by T. Fok, Connoisseurship of Rhinoceros Horn Carving in China, Hong Kong, 1999: no. 70, in the collection of the Shanghai Museum; no. 71, in the collection of the Harvard University Art Museum; no. 72, in the collection of Madam Dora Wong; no. 73, in the collection of Mrs. Angela Chua, formerly in the Arthur M. Sackler Collections and sold at Christie's Hong Kong, 1 December 1994, lot 17; and no. 74, in the Franklin Chow collection. J. Chapman discusses the group in detail and cites further examples in the Chester Beatty Library, Dublin (who hold a total of four examples); the National Palace Museum, Taipei; the Ostasiatiska Museet Stockholm; the Asian Art Museum, San Francisco; and the Musee des Arts Decoratifs, Paris. Another well-known example is the one included in the exhibition, Chinese Art from the Collection of H.M. King Gustaf VI Adolf of Sweden, The British Museum, 1972, p. 119, no. 186. 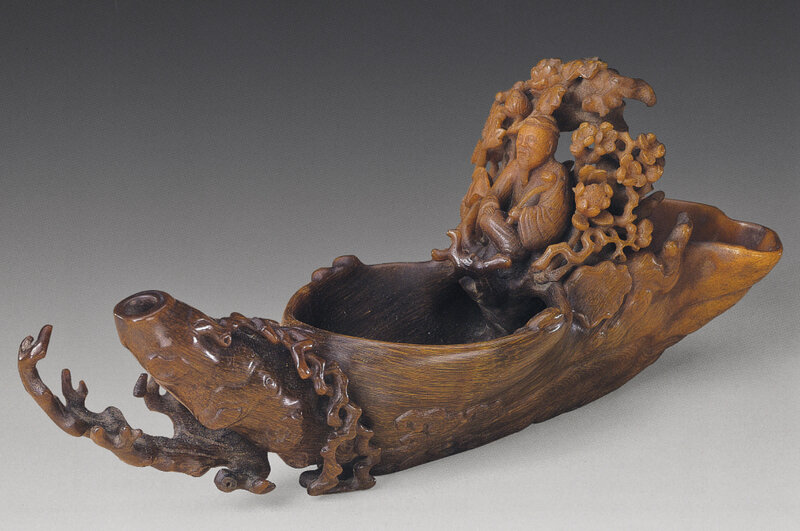 All of the published examples are slightly different, not only in the manner in which the hollow log is carved but also in the carving of Zhang Qian, and in what he holds. In some examples he holds a fly whisk, in some a ruyi sceptre, in others a book and in the Shanghai example a book as well as a lotus stem.

It is possible that these carvings were inspired by the famous silver example from the collection of Lady David. It is inscribed with a poem and the artist's seal, Bishan, denoting Zhu Bishan, a silversmith working during the 14th century, and was included in the exhibition, Chinese Art under the Mongols: The Yuan Dynasty (1279-1368), Cleveland Museum of Art, 1968, no. 37.