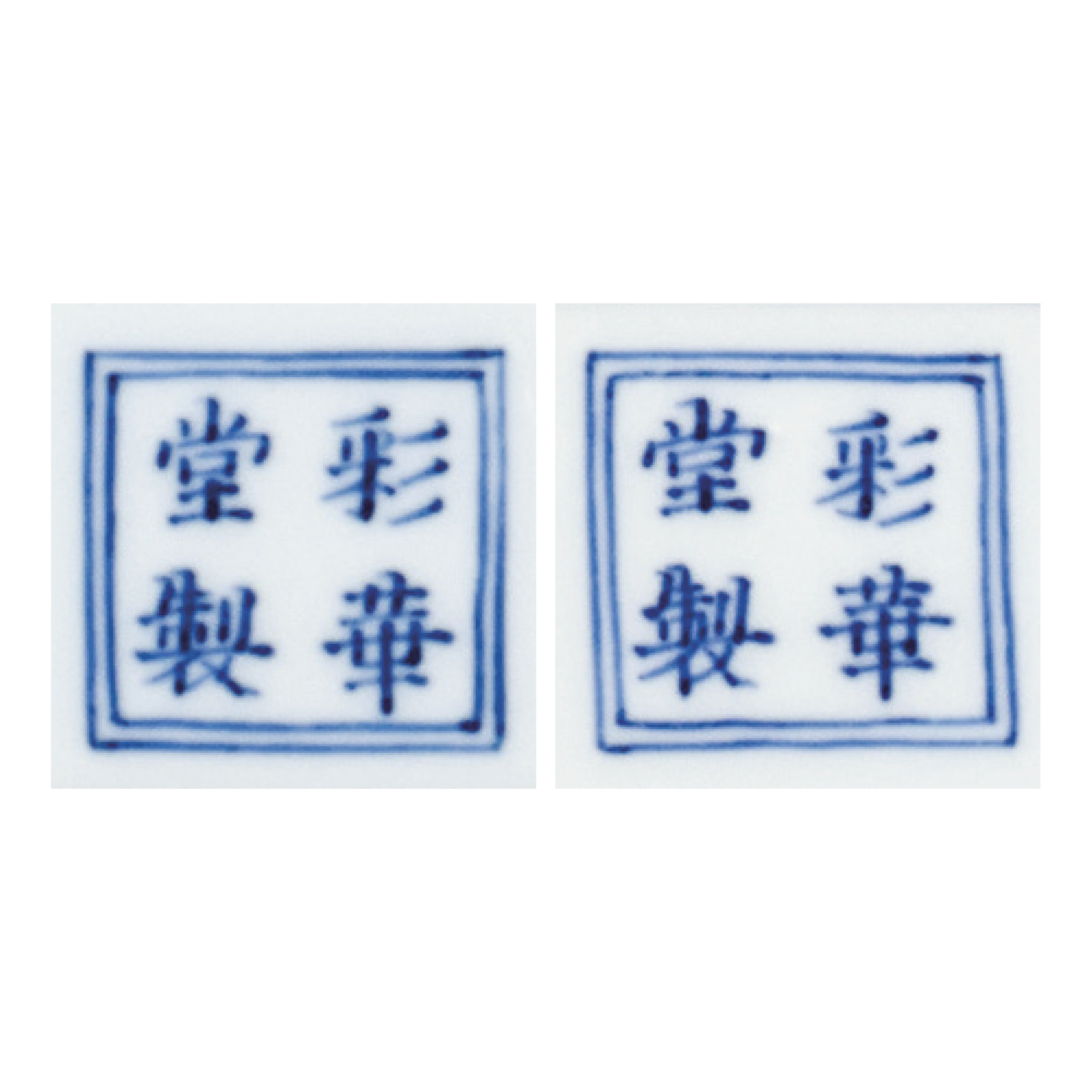 Each dish has shallow rounded sides and is decorated in vibrant famille rose enamels on the interior with a cockerel standing on blue rocks beside a hen underneath a plantain tree. The exterior is similarly decorated with the cockerel watching over hens and chicks amongst roses, bamboo, asters and narcissus.

Note: The hall mark, Caihuatang zhi, may be translated as 'Made for the Hall of Many Coloured Flowers'. This Hall appears to have been established in the Forbidden City in Beijing during the reign of the Qianlong Emperor, and continued to have been used by a number of his successors. A pair of bowls of this pattern, and with this same hall mark, from the collection of Mr. and Mrs. James E. Breece III, was sold at Christie's New York, 18 September 2003, lot 369.

This hall mark is found on pieces with various types of decoration. A dish dated to the Qianlong period, decorated with a Lamaist design, and the mark in iron red, is illustrated by M. Wilson in Rare Marks on Chinese Ceramics, Percival David Foundation/Victoria and Albert Museum, London, 1998, pp. 34-5, no. 7; and the mark, alone, which like the present mark, is in underglaze blue within a double square, is illustrated by Wang Qingzheng (ed.) in Underglaze Blue and Red, Shanghai, 1987, p. 206, fig. 22, where it is ascribed to the Qianlong period. As Wilson points out, some scholars have suggested that the vessels bearing this mark are imperial wares from the Qianlong period, while others ascribe Jiaqing or Daoguang dates, but Wilson suggests that porcelains bearing this mark should be dated on the basis of their form and decoration.

The decoration on these dishes is based on the famous doucai 'chicken' cups made during the Chenghua period (1465-1487), which were very accurately copied during the Kangxi reign (1662-1722). See R. Scott, Imperial Taste - Chinese Ceramics from the Percival David Foundation, San Francisco, 1989, p. 73, no. 42, for the Chenghua version, and p. 75, no. 44, for the Kangxi version. The current dishes have taken the essential theme and adapted it in the famille rose palette.

Christie's. Important Chinese Ceramics and Works of Art (Including The Su Zhu An Collection of Inkstones), Hong Kong, 27 November 2013