A large Ge-type moonflask with handles, Seal mark and period of Yongzheng (1723-1735)

A large Ge-type moonflask with handles, Seal mark and period of Yongzheng (1723-1735) 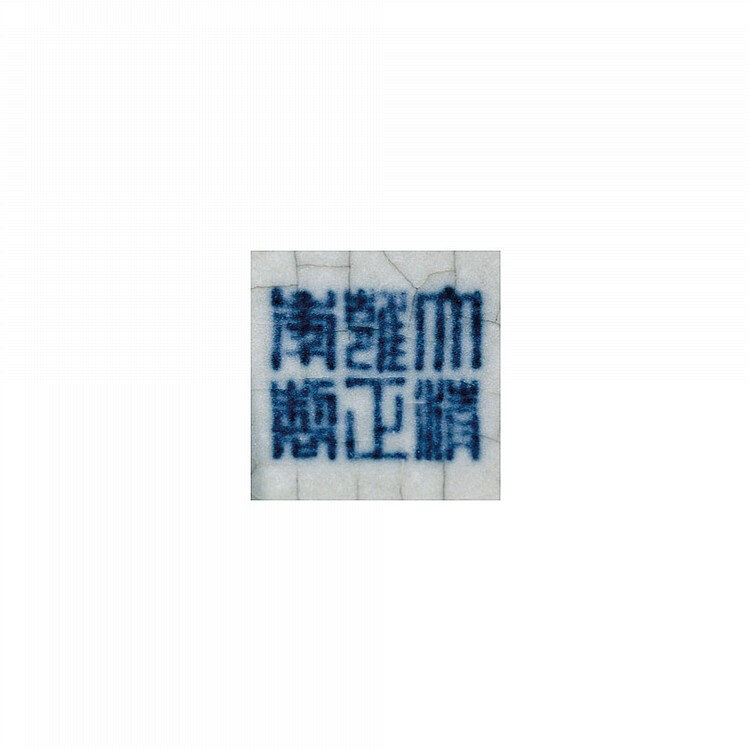 sturdily potted of compressed quatrelobed form, rising from a splayed foot to a waisted neck of conforming shape, flanked by a pair of openwork handles resembling stylised dragons, covered overall with an opaque bluish-grey glaze suffused with a network of grey crackles, the base inscribed with a six-character reign mark in underglaze blue.

Note: Flasks of this shape are extremely rare and no other example with this glaze appears to have been published. The monumental size and subtle lobed form demonstrate the ambitious technical and artistic achievements of the Qing potters working in the imperial kilns at Jingdezhen during Yongzheng's reign. The elegance of the flask is reinforced by the smooth cracked glaze which is a fine imitation of the classic 'Ge' Song wares.

A Yongzheng mark and period flask of closely related form and dimensions, decorated in underglaze blue with birds in fruiting branches, was sold in our London rooms, 5th July 1977, lot 232; and another, but with slightly differing handles and painted with an underglaze blue composite floral scroll, was sold in our London rooms, 27th November 1973, lot 261. Blue and white flasks of this form continued to be produced from the Yongzheng period; for a smaller unmarked example decorated with flower scrolls, see one sold at Christie's London, 18th June 2002, lot 194, and again in these rooms, 10th April 2006, lot 1836; and another depicting birds and peaches, in the Osaka City Municpal Museum, illustrated in Shincho Kogei no bi, Tokyo, 1993, pl. 70.

Compare Yongzheng mark and period moonflasks of similar size and Ge-type glaze but of varying forms, such as an octagonal example in the Palace Museum, Beijing, illustrated in Qingdai yuyao ciqi, vol. 1, pt. 1, Beijing, 2005, pl. 172; and a circular moonflask moulded with a central yin yang boss surrounded by the ba gua (Eight Trigrams), sold in our London rooms, 8th November 2006, lot 173.