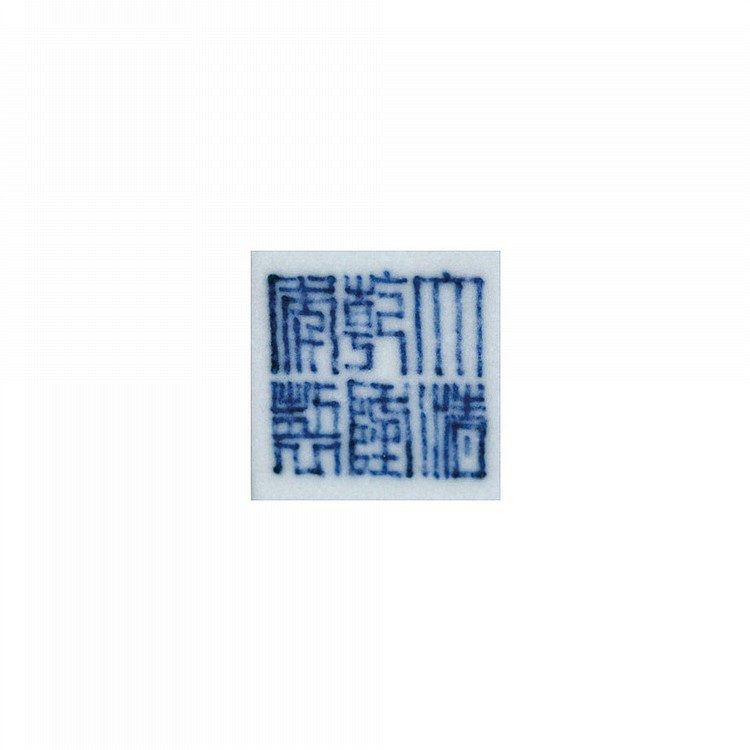 of rectangular section, the pear-shaped body moulded with a raised peach-shaped panel on the front and back, rising to a slightly waisted neck and a lobed mouth, flanked by a pair of facetted lug handles, covered overall with a greyish-blue glaze, supported on a straight foot, the base inscribed in underglaze blue with a six-character reign mark.

Note: The present vase is impressive for its large size and only one other example of such magnificent proportions are known; a vessel sold at Christie's Hong Kong, 27th May 2008, lot 1805. A number of smaller vases of this form and glazed to resemble Song wares, with Qianlong reign marks and of the period, are known; see two in the Idemitsu Collection, one with a Guan-type glaze and the other with a Ge-type glaze, illustrated in Chinese Ceramics in the Idemitsu Collection, Tokyo, 1987, pls 959 and 960 respectively; and a Guan-type glazed example sold in our New York rooms, 24th June 1982, lot 345.

In its glazing and form, this vase was made to imitate 'Guan' ware, one of the most celebrated official wares of the Song Dynasty and made for the court in the capital, Hangzhou in Zhejiang province. The shape of this vase is based on ritual bronze prototypes that were just being discovered and excavated during the Song dynasty. The Northern Song emperor Huizong (r. 1101-25) was a keen collector of both bronze and jade and commissioned the production of ceramic vessels after bronze pieces in his collection. Interest in archaism remained a strong feature of Chinese connoisseurship and reached its peak during the Qing dynasty. The Qianlong emperor amassed a large collection of ancient art objects and had objects imitating his favourite pieces made.