A very rare mother-of-pearl inlaid ruyi-form box and cover, Qianlong four-character mark and of the period (1736-1795)

A very rare mother-of-pearl inlaid ruyi-form box and cover, Qianlong four-character mark and of the period (1736-1795) 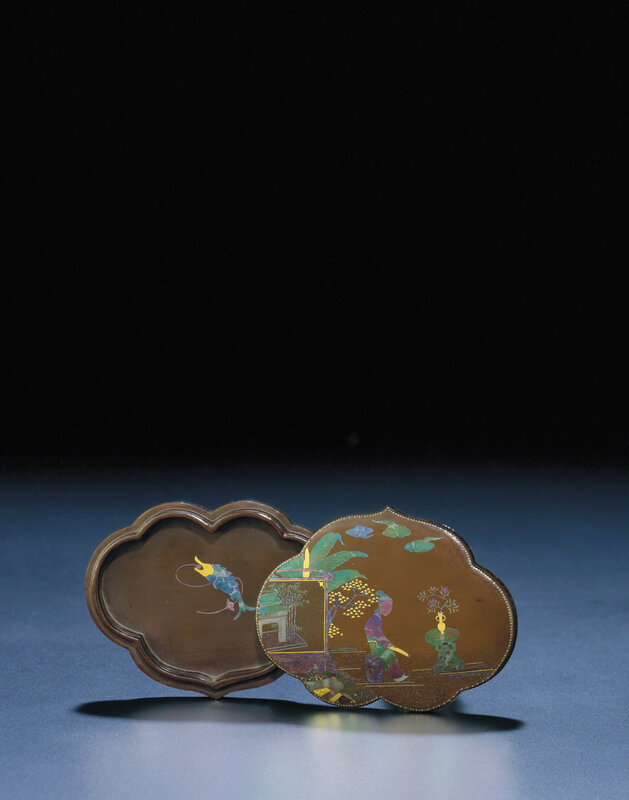 The slightly domed cover delicately inlaid with iridescent shells in different hues of blue and green with gold leaf highlights to depict a lady seated on a barrel stool beside a table supporting a flower vase and a large screen behind her, all against a brown lacquer ground, the sides with stylised geometric diaper, the interior left plain with the exception of a small flower sprig to the interior of the cover and a fish to the interior of the base, the base with the four character reign mark inlaid with mother-of-pearl and gilt within a square, wood stand.

Note: It is rare to find reign marks on mother-of-pearl inlaid boxes although some examples can be found with a maker's mark of Qian Li, denoting Jian Qianli, who specialised in inlaid lacquer and was known to have been active during the early Qing dynasty. Another Qianlong-marked mother-of-pearl inlaid box and cover of quatre-lobed form was sold at Christie's Hong Kong, 7 July (catalogue dated 28 April) 2003, lot 536.