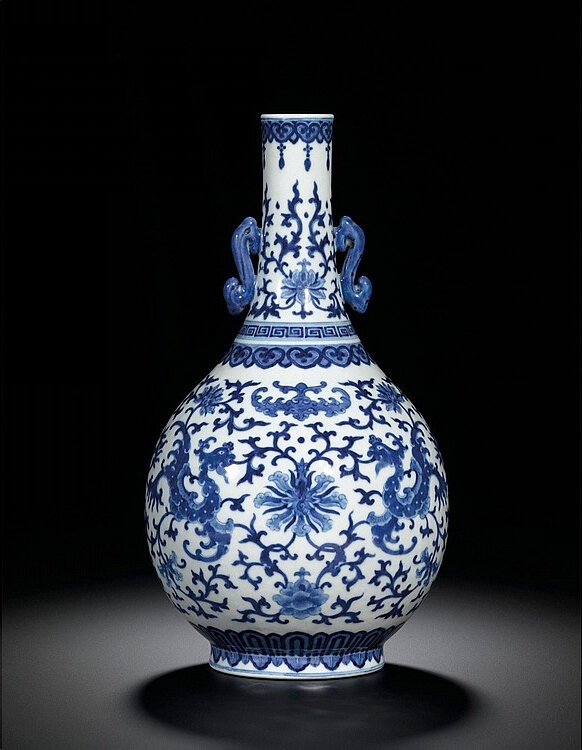 the pear-shaped body rising from a short straight foot to a long slender neck flanked by ruyi-shaped handles, the neck painted in vibrant tones of underglaze-blue on each side with a stylised lotus flower amidst foliate scroll, below a band of ruyi-heads at the rim, the  body with two pairs of confronting phoenix centred on a lotus flower below a bat in a band of ruyi lappets, with a band of lappets skirting the foot, the base inscribed with a six-character seal mark in underglaze-blue.

Note: No other Jiaqing vase of this form and decoration appears to have been published. The design derives from Qianlong pear-shaped vases, which depicted archaistic scrolling dragons instead of phoenix and similar decorative bands on the mouth, neck and shoulder; compare an example, with a Qianlong reign mark and of the period, sold in our London rooms, 29th March 1977, lot 266; and another sold at Christie's New York, 6th November 1980, lot 359. For a Qianlong vase painted with a related band of jewelled ruyi at the mouth and lappets at the foot, the body painted with two scrolling phoenixes and dragons amongst peony sprays, see one sold at Christie's London, 20-21st June 1981, lot 320.

Blue and white vessels flanked with ruyi handles are more commonly seen on moonflasks; see an example attributed to the Jiaqing period, decorated with two archaistic dragons encircling a shou medallion on a lotus scroll ground, included in the exhibition Ethereal Elegance. Porcelain Vases of the Imperial Qing. The Huaihaitang Collection, Art Museum, The Chinese University of Hong Kong, Hong Kong, 2007, cat. no. 113; and another painted with peach branches, with Jiaqing reign mark and of the period, in the Qing Court collection and still in Beijing, published in The Complete Collection of Treasures of the Palace Museum. Blue and White Porcelain with Underglazed Red (III), Shanghai, 2000, pl. 148.

The emperor of all birds, the phoenix is the motif for the empress of China while a pair of flying phoenix represents the wish for a harmonious marriage. The auspicious symbolism is accentuated in the depiction of lotus flowers, which stand for harmony and purity, and the wish-granting ruyi handles. Thus this vase may have been presented on the occasion of a wedding.