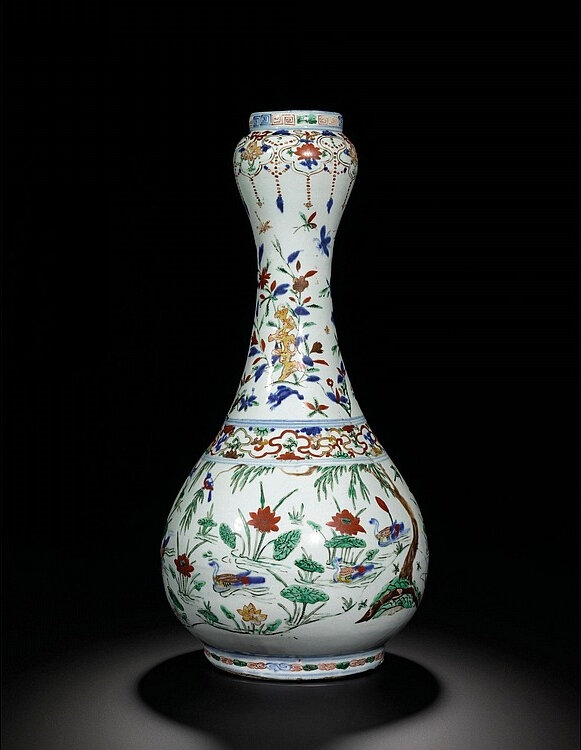 the well-potted pear-shaped body supported by a wide straight foot, rising to a garlic-bulb shaped mouth, decorated in colours of the wucai palette including brilliant tones of iron-red and strong purplish underglaze-blue, with mandarin ducks, herons, and various other birds in a pond covered with pondweed, willow and lotus blooms, beneath a band of ruyi lappets enclosing foliate flowerheads, the slender neck decorated with butterflies among flower sprays issuing from ornamental rocks, with crickets, a frog and a mantis, the garlic-bulb mouth collared by strings of beads and a band of pendent ruyi-shaped heads enclosing lotus sprigs, the rim inscribed horizontally with the six-character mark in underglaze-blue in a cartouche reserved on a key-fret band.

Note: The present vase belongs to a small group of wares of the same shape with varying decoration: mainly with waterfowl and plants or dragons painted on the main body. A similar vase, in the National Palace Museum, Taipei, is illustrated in Yeh Pei-Lang, Gems of the Wucai Porcelain, Taipei, 1996, pl. 83, together with another vase of this type decorated with dragons, also in the same collection, pl. 84. See a third example included in John Ayers, The Baur Collection, vol. 2, Geneva, 1969, pl. A203; and two vases from the Idemitsu Museum of Arts, Tokyo, with the waterfowl design, foliage scroll around the shoulder and pendent foliage around the head, included in the exhibition Imperial Overglaze - Enamelled Wares in the Late Ming Dynasty, Museum of Oriental Ceramics, Osaka, 1995, cat. no. 22.

Similar examples have also been sold at auction; see one from the Duchange collection, Paris, sold in these rooms, 8th April 2007, lot 525; another sold at Christie's Hong Kong, 6th November 1997, lot 1050; and one, included in the International Exhibition of Chinese Art, the Royal Academy of Arts, London, 1935, cat. no. 1912, sold in our London rooms, 24th March 1953, lot 62. Another Wanli mark and period wucai vase of the same shape and pattern, but with different secondary decorative bands, was sold at Christie's Hong Kong, 13th January 1989, lot 546; and one was sold in our Los Angeles rooms, 2nd November 1981, lot 304.