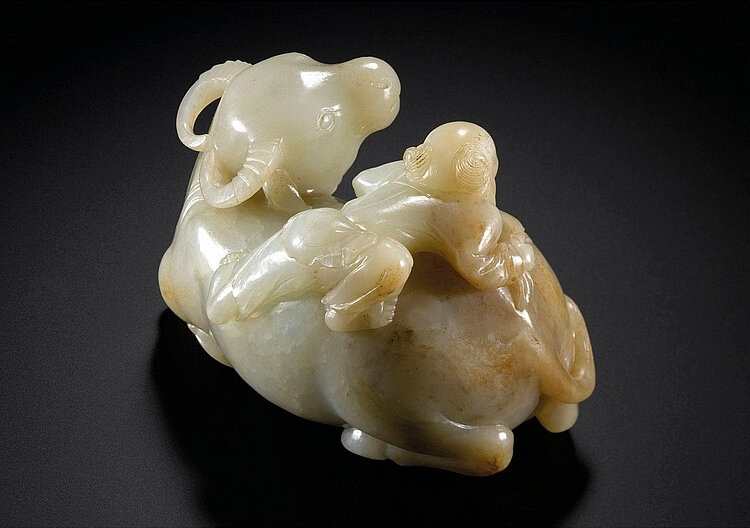 finely carved in the round as a recumbent buffalo with raised head and animated expression, detailed with powerful legs and a bushy tail, the boy in loose-fitted clothes climbing on the beast, clutching a spray of millet, the lustrous stone of a warm celadon tone highlighted with russet inclusions.

Note: Skilfully modelled in the round, the sense of naturalism and movement captured in this charming carving through the twisting poses of the figures is notable. A related carving of larger dimensions was included in the exhibition A Romance with Jade from the De An Tang Collection, Palace Museum, Beijing, 2004, cat. no. 79; a slightly smaller example was sold in these rooms, 8th October 2010, lot 2800; and another of this size was sold at Christie's London, 4th November 2008, lot 7. Compare also a carving depicting a boy on a standing buffalo illustrated in Zhongguo yuqi quanji, vol. 6, Shijiazhuang, 1993, pl. 265.

The buffalo and herd-boy motif was a popular subject from the Song period (960-1279) and was symbolic of childhood play and bucolic freedom. The poets Su Shi and Huang Tingjian (1045-1105) and their painter friend Li Gonglin (c. 1041-1106) are among those first associated with the genre, and from the 11th century buffalo herd-boys exemplified for many scholars and officials the simple life far away from ceremony, ritual and social obligation. See a hanging scroll painted by Li Tang (c. 1050-after 1130), Herd Boy with Water Buffalo and Calf (11th or 12th century), in the National Palace Museum, Taipei, published in Ann Elizabeth Barrott Wicks (ed.), Children in Chinese Art, Honolulu, 2002, p. 54, fig. 2.6. Two mottled jade carvings attributed to the Song and Yuan periods, from the Victor Shaw collection, were included in the exhibition Chinese Jades from Han to Ch'ing, Asia House Gallery, New York, 1980, cat. nos 46 and 47, together with a white jade carving of two boys and a buffalo, from the Gerald Godfrey collection, cat. no. 48.