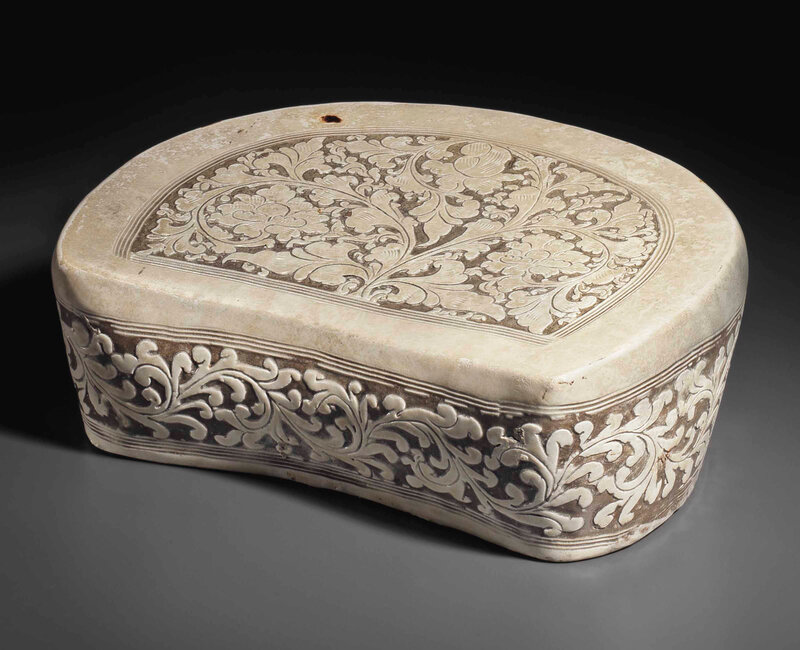 The canted top is well carved through the white slip with a leafy peony spray bearing three flowers, and around the sides with a band of foliate scroll, all within striated borders surrounded by a plain cream field, and under a clear glaze that continues onto the base which is irregularly applied with a cream-tinted glaze.

Note: The style of the carved floral decoration on the this pillow was influenced by contemporaneous metalwork. It appears not only on pillows, but also on vases and ewers, such as the example in the Tokyo National Museum, which is illustrated in Song Ceramics, Tokyo, 1999, p. 126, no. 87. A fragment of a vessel decorated in this style was exhibited in Kiln Sites of Ancient China - Recent Finds of Pottery and Porcelain, Oriental Ceramic Society, London, 1980, p. 155, no. 389. This fragment had been found in 1962 at a kiln site at Quhezhen, Dengfengxian, Henan province. Most Cizhou wares bearing this distinctive style of floral design, deeply cut through the white slip on the surface of the vessel using the sgraffiato technique to reveal the buff-colored clay beneath, which then provides the background to the design, tend to be attributed to this kiln site, which was active from the Tang to the Yuan dynasty, and reached its peak of production during the Song.

A related Cizhou pillow, dated to the Northern Song dynasty, carved with a similar band of foliate scroll around the sides and a single peony bloom on the canted top, is illustrated in Song Ceramics from the Kwan Collection, Hong Kong, 22 July - 11 September 1994, no. 141.