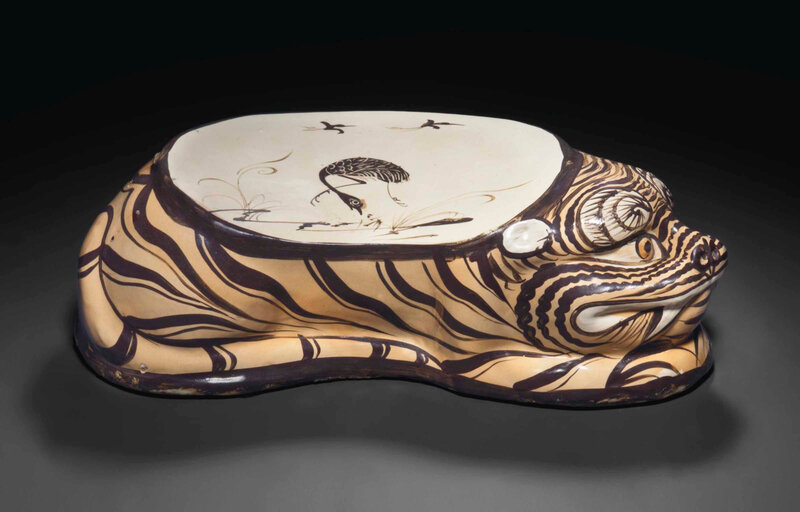 The pillow is made in the shape of a recumbent tiger with its head resting on the front paws, and the dished center of the back is decorated with a scene of a water bird amidst the grasses of a pond below two birds in flight above. The decoration is painted in brown and pale russet on a white slip, and under a clear glaze. The nostrils are formed by the vent holes.

Note: A similar Cizhou-type tiger-form pillow, decorated on top with a panel of a swan swimming, is illustrated by Jiena Huo in Fire and Earth: Early Chinese Ceramics (3500 B.C. - 1400 A.D.) in the Museum of East Asian Art, Cologne, 2008, p. 187, no. 147, where it is dated Jin dynasty, 12th century, and suggests that it is probably from Changzhi, in Shanxi, where other pillows of this type have been found. Another similar pillow, decorated on top with a bird perched in bamboo, in the Avery Brundage Collection, Asian Art Museum, San Francisco, is illustrated by M. Tregear, Song Ceramics, New York, 1982, p. 82, no. 79, where it is dated late Northern Song-Jin dynasty, late 12th century.

Animal-form pillows were believed to protect against evil and to have helped women give birth to sons.

The result of Oxford Authentication Ltd. thermoluminescence test no. P111b48 is consistent with the dating of this lot.