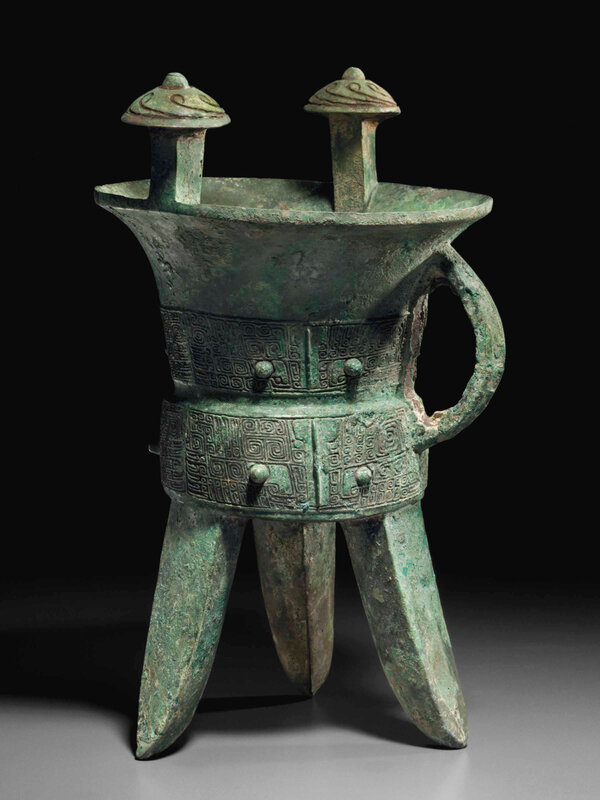 The vessel is raised on three tapering blade supports and is flat-cast on the body and the base of the flared neck with bands of taotie masks with rounded eyes centered on narrow flanges. A loop handle projects from one side, and a pair of capped posts rises from the rim, Japanese wood box.

Note: A very similar jia, dated late Shang dynasty, 14th-11th century BC, but of slightly larger size (34.7 cm.), in the National Palace Museum, Taipei, is illustrated in the Catalogue of the Special Exhibition of Shang and Chou Dynasty Bronze Wine Vessels, Taipei, 1989, p. 97, pl. 18. Another jia of larger size (45 cm. high) with similar profile and bands of decoration around the sides, dated 13th-12th century BC, is illustrated by R.W. Bagley, Shang Ritual Bronzes in the Arthur M. Sackler Collections, The Arthur M. Sackler Foundation, 1987, pp. 164-65, no. 7. The author notes that "jia decorated in two registers appeared shortly before the Anyang period" (1300-1030 BC).