A very fine and extremely rare pair of famille rose turquoise-ground double-gourd vases, Jiaqing sealmarks and of the period

A very fine and extremely rare pair of famille rose turquoise-ground double-gourd vases, Jiaqing sealmarks and of the period 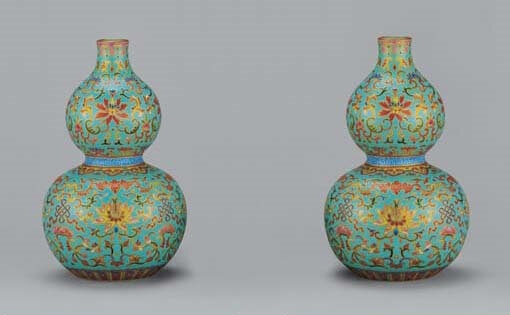 Each vase exquisitely enamelled in pink, green, yellow, blue, white and iron-red and outlined in gilt on a bright turquoise-green ground, on the globular lower bulb with four colourful lotus blooms below iron-red bats and alternated with blue endless knots, all amidst interlocking vines and curled tendrils, between upright lappets around the base and a band of ruyi and demi-florettes below the waisted neck encircled by blue key-fret, the pear-shaped upper bulb with further elaborate lotus scrolls below the gilded mouth rim, the interior and base with turquoise enamel, stands, box.

Note: This pair of vases belongs to a group of wares decorated with bright enamels on a turquoise ground in imitation of cloisonné enamelware. Although the idea of porcelain imitating other materials was pioneered in the early Qing dynasty, it was during the Qianlong period that the technique became very popular, and continued to be used during Emperor Jiaqing's reign. In cloisonné enamel, raised lines are applied to create 'cloisons' on the body of a metal vessel which are then filled in with coloured glass paste, fired and later gilt. On the present vases, the gilt outlines enclose enamelled colours to produce the visual effect of cloisonné.

The decoration on this pair of vases originated in the Qianlong period, as evident from a Qianlong-marked double-gourd vase of almost identical design, sold at Sotheby's Hong Kong, 16 May 1989, lot 308. Similar double-gourd vases with Jiaqing marks include one illustrated in Sekai Toji Zenshu, vol. 12, fig. 61; and another from the Edward T. Chow Collection, also sold at Sotheby's Hong Kong, 25 November 1980, lot 173. An ovoid vase with comparable decoration and a Qianlong mark also from the Robert Chang Collection was sold in these Rooms, 2 November 1999, lot 505.

These vases are full of symbolism for progeny and longevity. The gourd itself is representative of fertility due to its many seeds, while the double-gourd is traditionally associated with Daoism, often depicted as the vessel thought to have held the elixir of life, which belonged to one of the eight immortals, Li Tieguai. The bats, fu, provide the homophone for fortune, and the lotus and endless knot are both symbols of Buddhism.