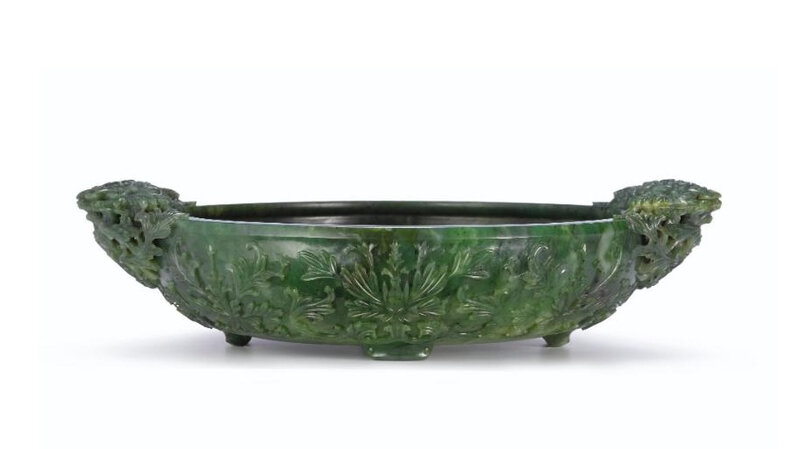 finely carved with rounded sides supported on four short scroll feet, rising to a tapered rim interrupted by a pair of handles carved and pierced in the form of stylised ruyi-petalled blooms stemming from elaborate foliate clusters, deftly carved on the exterior in low relief with eight stylised lotus blooms borne on a continuous leafy scroll issuing curling leaves, the stone of a rich spinach-green colour mottled with white inclusions and dark speckles.

Provenance: An important English collection formed in the 1920s.

Note: The present jade vessel is exceptional for its large size and the intricate design of flower sprays, which takes its inspiration from Hindustan jades. Central Asian jade wares were originally brought to the Qing court under the Qianlong emperor and were subsequently copied by Chinese craftsmen who adapted the new designs to their own repertoire. A Moghul green jade lobed bowl, carved with a similar floral motif, in the National Palace Museum, Taipei, was included in the Museum’s exhibition Exquisite Beauty. Islamic Jades, Taipei, 2012, cat. no. 62. Jade vessels of this type, often referred to as ‘marriage bowls’, were commonly presented on the occasion of a wedding, and were thus carved with a variety of motifs that allude to felicitous wishes for a long and happy marriage life. They are characterised by their elaborately carved handles, which were carved into various forms such as dragons and flowers, and appeared like two butterflies flanking the bowl when viewed from above.

Compare a large spinach-green jade marriage bowl, carved on the exterior with a lotus scroll, sold at Christie’s London, 16th December 1996; another, sold at Christie’s Hong Kong, 27th May 2009, lot 1839; and a smaller bowl, in the De An Tang collection, included in the exhibition A Romance with Jade, Palace Museum, Beijing, 2004, cat. no. 18. Jade bowls carved with related scrolling motifs are also known modelled with a circular foot; for example see one in the Palace Museum, Beijing, illustrated in Zhongguo yuqi quanji [The Complete Collection of Chinese Jades. Qing Dynasty], vol. 6, Shijiazhuang, 1993, pl. 317; another in the collection of C.C. Lai, sold in our London rooms, 17th October 1978, lot 316; and a third bowl, from the collection of Mr. and Mrs Henry J. Heinz II, sold in our New York rooms, 18th March 1977, lot 48.