A fine and extremely rare early Ming blue and white dish, Xuande six-character mark in a line and of the period (1426-1435)

A fine and extremely rare early Ming blue and white dish, Xuande six-character mark in a line and of the period (1426-1435) 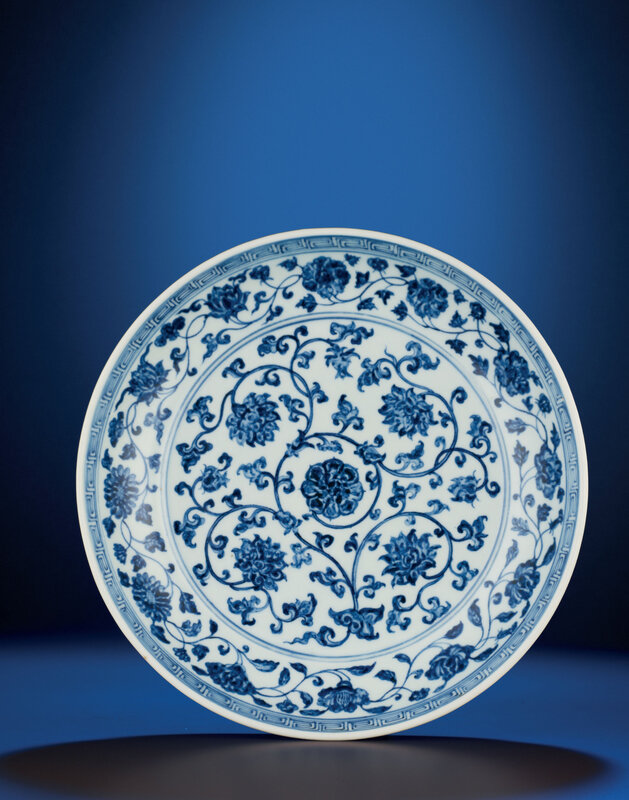 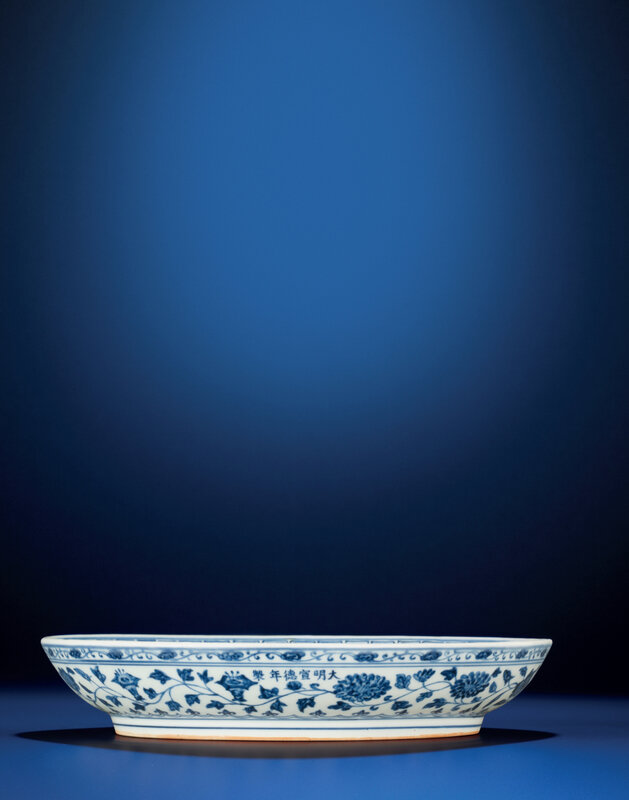 Finely potted with shallow, rounded sides rising from a slightly tapered foot ring. The dish is well painted in a vibrant, even cobalt blue on the interior with four lotus blossoms borne on a leafy, branching vine spiraling outward from a flowerhead in the centre, all within a double-line border below composite flower meander comprising six adjacent pairs of flowerheads including peony, chrysanthemum, lotus and camellia and borne on a slender vine in the well and a narrow band of keyfret at the rim. The exterior is adorned with a further frieze of flower scroll incorporating six different pairs of flowers set between a narrow band of lingzhi meander above and a band of conjoined trefoils below. The reign mark is written in a line on the exterior below the rim, and the biscuit base burnt orange in the firing.

Note: Blue and white dishes bearing Xuande reign marks of this design are extremely rare. Of the published dishes of this type and date, almost all have a lotus blossom as the central flowerhead, lotus scroll in the well and chrysanthemum scroll on the exterior, unlike the composite foliate scroll of paired blooms which decorates both the well and exterior of the present dish.

Only two other examples of dishes of this very rare pattern appear to have been published. One was excavated at Zhushan in 1982 and published in Xuande Imperial Porcelain Excavated at Jingdezhen, Taiwan, 1998, pl. 91. The other, of similar size to the present example, from the J.M. Hu and the Jingguantang collections, was sold at Sotheby's New York, 4 June 1985, lot 3 and again at Christie's Hong Kong, 20 March 1997, lot 71.

Of the dishes decorated with lotus and chrysanthemum scroll some bear a Xuande mark and some are unmarked. See the marked example in the Victoria and Albert Museum illustrated by Sir Harry Garner, Oriental Blue and White, London, 1954, pl. 16, and an unmarked example illustrated by Regina Krahl, Chinese Ceramics from the Meiyintang Collection, vol. II, London 1994, p. 49, where the author notes that the use or lack of a mark 'may either signify different destinations, the court or export - or different dates Xuande or Yongle - or both'.

The other distinguishing motif on this dish, the conjoined trefoil band at the base of the exterior walls, is also found on an unmarked dish illustrated by John Pope, Chinese Porcelains from the Ardebil Shrine, Washington, 1956, pl. 34 (29.98), which is the most similar to the present dish, also having pairs of different flowers incorporated into the foliate scroll in the well.

Commentaires sur A fine and extremely rare early Ming blue and white dish, Xuande six-character mark in a line and of the period (1426-1435)