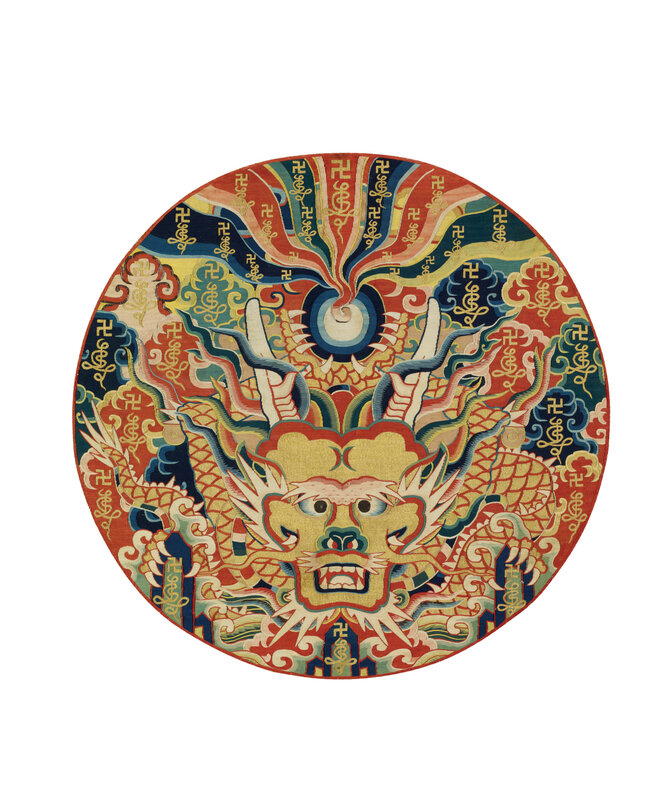 The circular badge is finely woven to depict a front facing dragon, with its front legs raised and claws clutching a 'flaming pearl' centred between its horns, the hind legs each grasping trident mountains emerging from cresting waves. Each cloud, mountain and band of radiance is marked with the characters Wan and Shou. The roundel is worked in threads of tones of red, blue, green, yellow, beige, white and gold, mounted.

Note: It is highly probable that the badge was made to commemorate the emperor's birthday with its references to longevity.

This badge may have been worn by the Emperor Zhengde (r. 1506-1521), the Emperor Jiajing (r. 1522-1566) or the Emperor Wanli (r. 1573-1619). The colours of the dyes in this badge reflect a 16th century date of manufacture. John Vollmer, op. cit., p. 38, notes that the unusual design, and the superb quality of this piece, suggests that this badge was woven at the Imperial workshops during the reign of Wanli Emperor.

Being a front facing dragon, this roundel was worn either at the Emperors Chest, at the heart, or at the back of his robe.