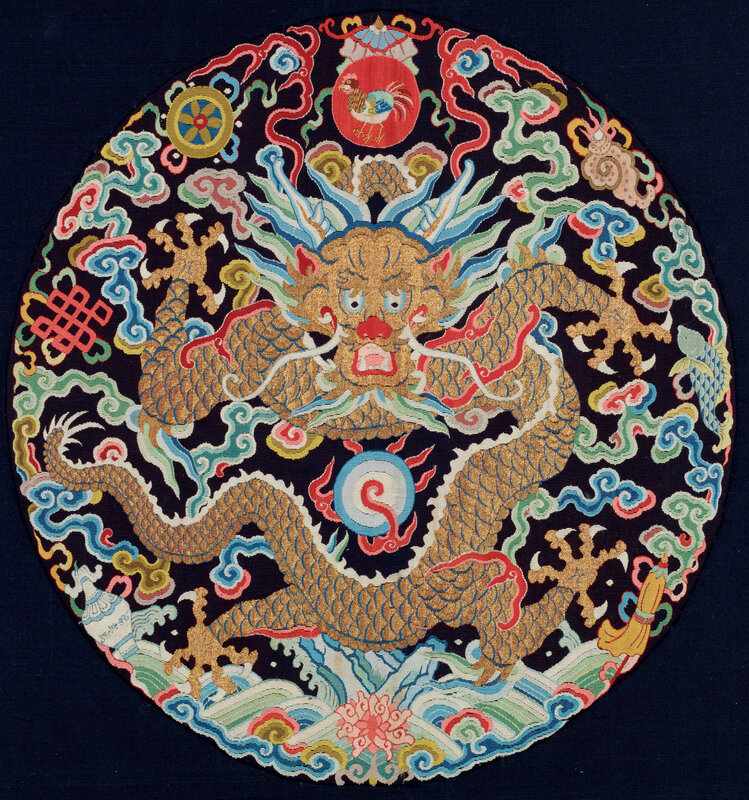 Finely woven with a gold front-facing five-clawed dragon with its body coiled around a 'flaming pearl' as it leaps amidst ruyi-shaped clouds interspersed with the Bajixiang, Eight Buddhist Emblems, above billowing waves. Above the dragons head is a three-legged cockerel in a red disk, one of the twelve symbols of Imperial authority. All woven in fine gold and multicoloured threads on a black silk ground, mounted.

Note: The semiformal court surcoat for the emperor was named gunfu, literally 'royal coat,' a name dating back to the Zhou dynasty (ca.1050 - 265 B.C.). Like the ancient name jifu used for dragon robes, this return to original sources was part of the Qing strategy to model themselves as Han Chinese emperors. The name was reserved for the emperor's surcoat, which was decorated with dragon roundels. Those positioned at the shoulders also bore the ancient symbols for the sun and moon, the two most important signs of the Twelve Symbols of Ancient Authority. One of the first references to the garment name in the early eighteenth century Qing court regulations specifies the wearing of the gunfu for the first day of the annual sacrifices at the Altar of Heaven. See S.V.R. Cammann, China's Dragon Robes, New York, 1952, p. 28. By the mid-eighteenth century wearing surcoats over jifu, or semiformal court attire patterned with dragons, was widespread throughout the court.