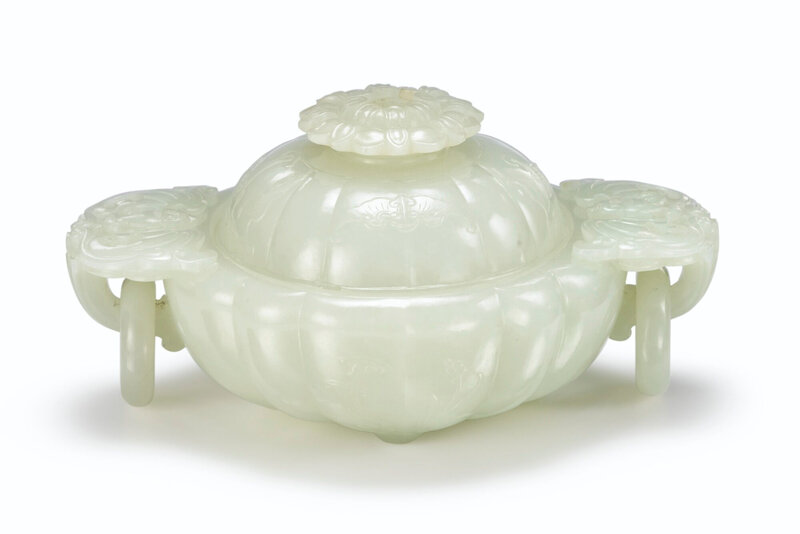 the lobed sides rising to an incurved rim, all supported on four short hemispherical feet, the sides finely carved in low relief with plants issuing ruyi-shaped flowers and flanked by a pair of handles suspending a loose ring, the handles carved in high relief with an outstretched bat and low relief with a section of the shou character, the domed cover similarly lobed, carved in low relief on the exterior with ruyi-shaped flowers and an outstretched bat, surmounted by a lotus knop detailed with a hollow stamen and accented with incised petals, the smoothly polished stone of a pale celadon colour mottled with attractive icy streaks and faint russet inclusions.

Note: This censer is impressive for its large size and evenness of tone, which is highlighted by the low relief carving and skilfully finished surface. The jade employed for the present censer most probably came from the jade-rich territories of Khotan and Yarkand, areas opened after the Qing army’s conquest of the north-western territories. Jade imported from this Central Asian region was of the highest quality, thus allowing carvers to produce wares of the purest and brightest white colouration.

This piece is also notable in its combination of Chinese and Mughal styles and represents the admiration that the court had for Mughal jade works. While the loose ring handles and the auspicious design are telling traits of Chinese jade, the openwork lotus knop and floral shape are characteristic of Mughal carvings. Ever since 1758, when the first piece of Mughal jade was submitted as tribute to the Qianlong Emperor, the Qing court was fascinated by this style of jade carving.

Compare two similarly lobed ewers of compressed globular form and floral-inspired knops, in the Qing Court collection and still in Beijing, included in The Complete Collection of Treasures of the Palace Museum. Jadeware (III), Hong Kong, 1995, pls. 212 and 216. Lobed censers were also carved in the ‘chrysanthemum style’, such as one sold in these rooms 27th April 2003, lot 295; and another, from the collection of the Manno Art Museum, Osaka, sold at Christie’s London 21st June 2001. .