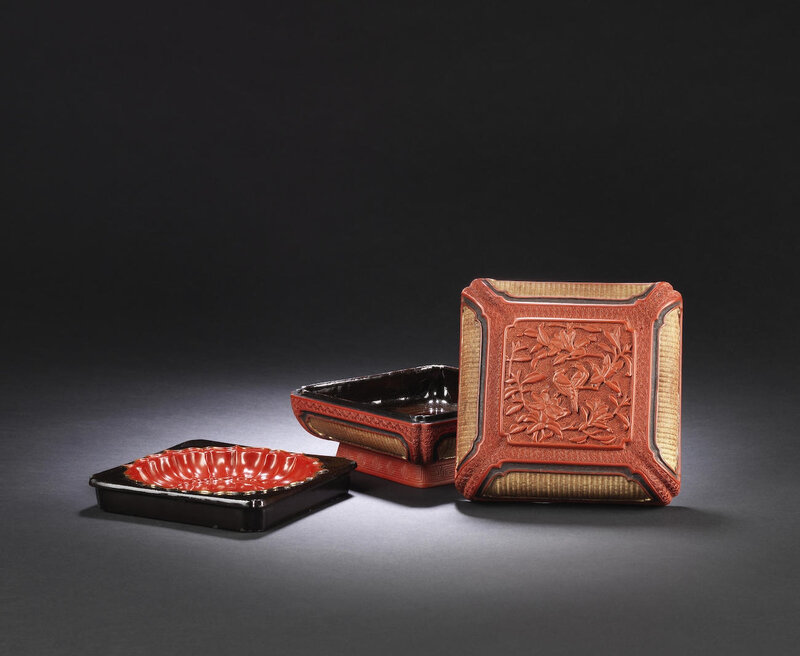 The quatrelobed box and cover each with four panels of gilt basketweave set within the red lacquer trefoil ground, the cover with a square lacquer panel on the top carved with a pair of birds perched on blossoming magnolia branches, the interior containing a square black lacquer tray set with a recessed red lacquer dish shaped as a lobed chrysanthemum.

Note: Basketry of this type was popular during the mid to late Ming dynasty and are usually seen with polychrome, gold painting, or mother-of-pearl inlay. The present lot with carved lacquer, however, is one of the rarer examples, executed with meticulous care and attention to detail, particularly evident in the treatment of the birds and magnolia branches. Compare a very similar example from the Metropolitan Museum of Art, New York, illustrated by J.C.Y.Watt and B.B.Ford, East Asian Lacquer: The Florence and Herbert Irving Collection, New York, 1991, no.64.

Compare another similar lacquer box and cover with basketweave panels in the Cleveland Museum of Art which is dated to 1609, illustrated by J.C.Y.Watts, The Sumptuous Basket: Chinese Lacquer with Basketry Panels, New York, 1985, no.29.

Other related examples of lacquer basketweave boxes and covers, from the Muwen Tang Collection, are illustrated by S.Kwan, Chinese Lacquer, Hong Kong, 2010, pls.85-95.