HONG KONG.- Phillips unveiled two masterworks by Zao Wou-Ki, 22.6.63 and 24.10.63, as leading highlights of the 20th Century & Contemporary Art Evening Sale in Hong Kong on 8 July, 2020. Coming to the auction market for the very first time, these exceptionally important works are prime examples completed at the peak of the Zao Wou-Ki’s Hurricane Period (1959-1972), a period which is considered the height of his extraordinary artistic career.

Isaure de Viel Castel, Head of 20th Century & Contemporary Art, Hong Kong, said, “Phillips is proud to be entrusted with the sale of these two masterworks by Zao Wou-Ki, in our upcoming 20th Century & Contemporary Art Evening Sale in Hong Kong this July, as we celebrate Phillips’ fifth year anniversary in Asia. These magnificent paintings were initially presented by New York’s renowned Kootz Gallery, and it is rare to see two such works by Zao side-by-side in red and gold, two auspicious colours in Chinese culture. With their distinguished provenance, the unprecedented offering of these two Hurricane Period works in our Evening Sale will undoubtedly generate huge interest from the international collecting community.”

22.6.63 and 24.10.63 were originally in the collection of Walter R. Beardsley, an avid American collector who amassed a world class collection of modern and contemporary art. He acquired these two works from the Kootz gallery, founded in New York by Samuel Kootz. Kootz was instrumental in encouraging Zao to create large-format paintings in order to explore the Hurricanes in an unbridled way, and not to be limited to smaller canvases. He not only challenged the artist but, starting with the Zao’s first solo exhibition in his gallery in 1959, promoted his work in the USA every year until the gallery’s closure in 1966.

Zao Wou-Ki’s Hurricane Period
The Hurricane Period (1959-1972) paintings of the 1960s marked the culmination of Zao Wou-Ki’s formative training in traditional Chinese techniques and transition towards a more grand and majestic style synthesising Chinese and Western styles as well as ancient and modern elements. Zao’s singular skill in composition is proven in both 22.6.63 and 24.10.63, where the solemn stillness ruptured by explosive lines that burst forth and fill the atmosphere, battling the elemental and chaotic. The brushwork is grand, proud and vigorous – 22.6.63’s inky-black brushstrokes leaden against a crimson red background convey a thriving, pulsating latent energy beneath the surface of the canvas, whilst in 24.10.63 sparse flying brushstrokes in stark black and brown hues are contrasted with one defiant scarlet red smudge. A large horizontal band of deep black and gold-exposed ground appears at the edges of each painting, creating a great impression of depth and a distant glimpse of peace beyond the tempest. The vertical format heightens the sense of compression, whilst interwoven oil pigmented splashes and strokes, full of visual agitation, add to the sense of strong motion and energy trapped within the monumental space. 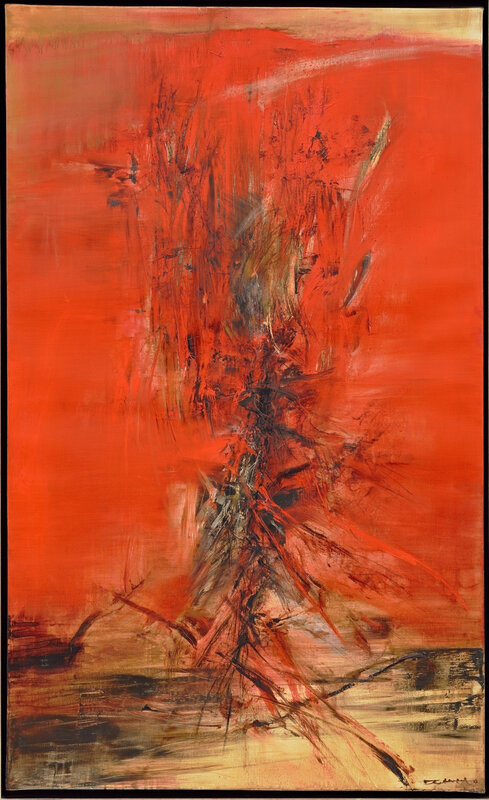 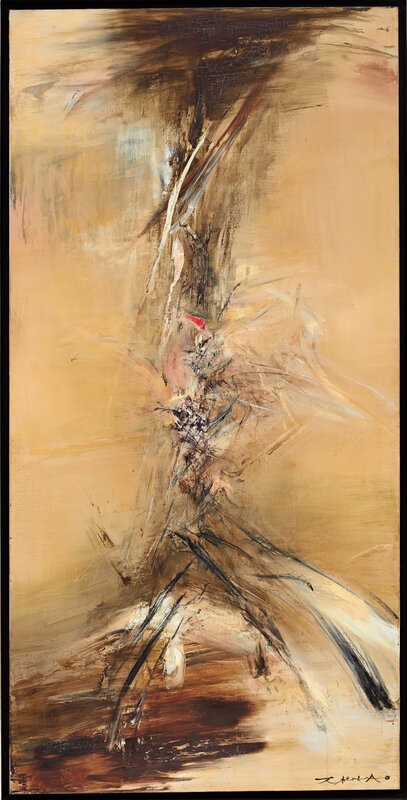