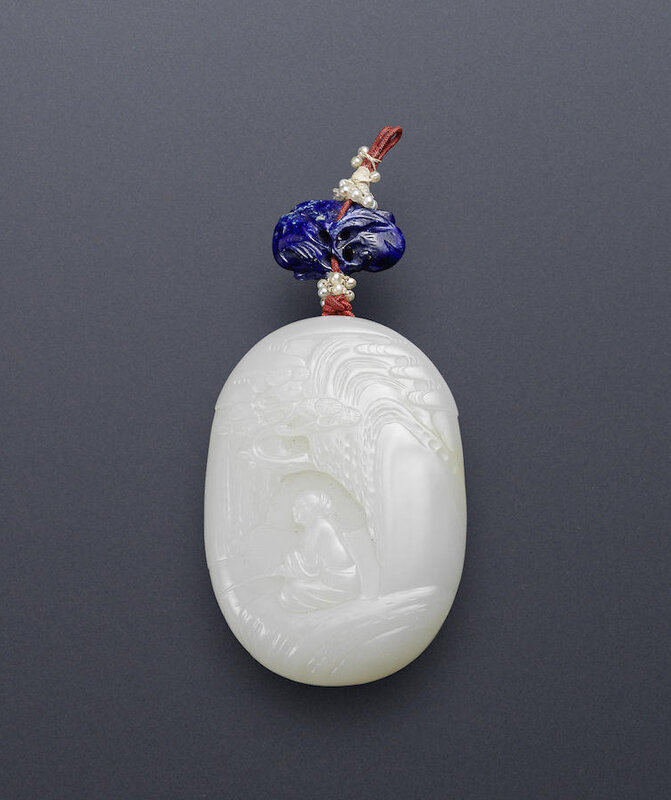 Exquisitely worked on one side with a fisherman seated on the riverbank with rockwork and a pine tree beneath misty clouds, the reverse with a landscape scene featuring a large trunk of a paulownia tree, carved in raised relief on the right with a seven-character kaishu inscription, the stone of a lustrous white tone.

Note: The inscription reads 松溪隱釣圖，子剛 Songxi yindiao tu, Zigang and can be translated as "fishing on one's own under a pine tree and by a stream, Zigang".

The current lot is exceptional for the quality of the stone and decoration, and ranks amongst the highest quality examples of its type. The most sought-after jade quality is known as 'mutton fat' white jade, or yangzhi baiyu. This rare stone was rare and heavily prized by the Imperial court of the Qing dynasty for its purity and snow-white translucency.

Little is known regarding Lu Zigang in terms of actual evidence, in contrast with his legendary reputation as the finest Suzhou jade carver of all time. According to Craig Clunas's research, Lu's name appeared in the 1642 edition of the Gazetteer of Taicang Subprefecture, 太倉州志 Taicangzhou Zhi, recording him as a native of this district, "fifty years ago there was in this prefecture a certain Lu Zigang, whose skill at carving [jade] with the knife remains unsurpassed to the present. Jade hairpins by him sell for fifty or sixty ounces of silver each. The skill was not handed on at Zigang's death"; see C.Clunas, Superfluous Things. Material Culture and Social Status in Early Modern China, Honolulu, 1991, p.64.

Fascination with the landscape subject of a lone fisherman by a stream hidden from plain view amidst pine trees was widespread during the mid-Qing period and found favour in the Qing Court; see for example the Imperial calligraphy on handscroll with Qianlong Yubi calligraphic inscription and impressed seal marks of the Qianlong Emperor, Fishermen in Reclusion among Mountains and Stream by the Ming dynasty painter, calligrapher and poet Tang Yin (1470-1524), in the National Palace Museum, Taipei, accession no.000467N.