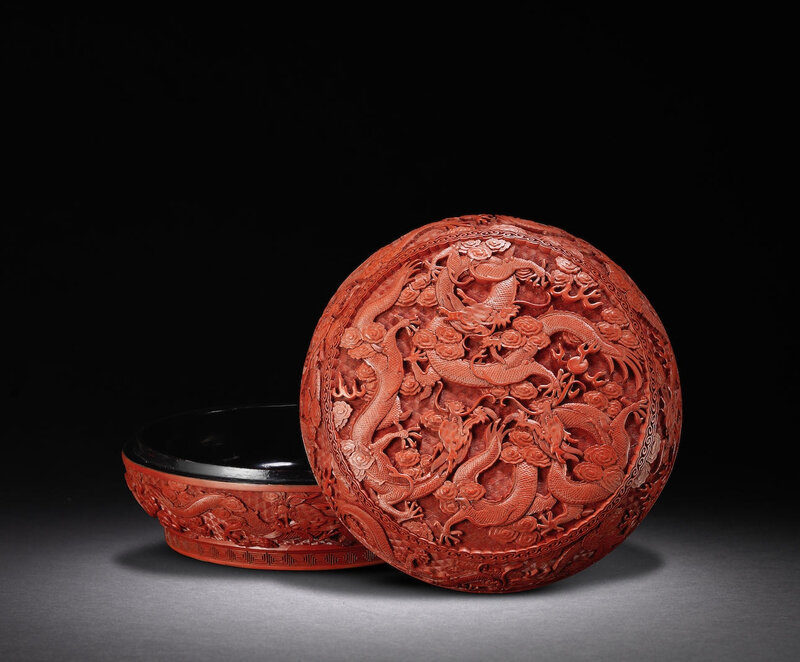 The domed cover densely carved in crisp relief with three scaly five-clawed dragons writhing sinuously amidst ruyi-shaped clouds in mutual pursuit of a flaming pearl, against a background of tumultuous foaming waves, the sides of the box and the cover similarly carved with three striding dragons, the interior lacquered black..

Note: The present lot is notable for its dynamic and vigorous rendering of the nine five-clawed dragons striding among clouds in pursuit of a flaming pearl, demonstrating the exceptional craftsmanship achieved by the lacquer ateliers during the Qianlong period.

The nine-dragon motif refers to the nine sons of the dragon, longsheng jiuzi (龍生九子), who are the mythological sons of the Dragon King. This subject matter can be seen as early as the Song dynasty, as painted on the famous ink and colour handscroll titled 'Nine Dragons' attributed to the Southern Song dynasty court painter Chen Rong (1200-1266) in the Museum of Fine Arts, Boston (accession no.17.1697).