Chinese Archaic Bronzes from the Franco Marinotti Collection at Bonhams, 14 May 2015

Chinese Archaic Bronzes from the Franco Marinotti Collection at Bonhams, 14 May 2015 Coming from a small city in Italy, the extraordinary journey of Franco Marinotti (1891-1966) began in a textile company near Milan (the Filatura Cascami Seta) at the beginning of the 20th century, where he made his way up to the prominent position of managing the Warsaw and Moscow branches. This enriching experience and strong commercial relationships developed in Russia allowed him to launch his own company in 1921, the CICE - Compagnia Industriale Commercio Estero, and have continuous business links with Russia and South East Asia even following the October Revolution in 1917. The enterprise, which was intended to facilitate and regulate the economic relationships between Italian companies and Russia, resulted in Marinotti becoming a highly influential commercial and political figure.

In 1930, Senatore Borletti, one of the most important Milanese entrepreneurs and financiers, asked Marinotti to become managing director of the SNIA Viscosa. He subsequently became CEO in 1934 and President and shareholder of SNIA until his death in 1966. In these politically and economically troubled times, Franco Marinotti proved to be an exceptional leader bringing the company to an unprecedented international level, revealing himself as a man of great intuition and many talents, with a clear disposition for innovation. His merits were also recognised by King Umberto II, the last King of Italy, who rewarded him with the noble title of Count of Torviscosa, a town founded by Marinotti.

As a philanthropist, he was very much involved in collecting and preserving art, including Antiquities, Old Master Paintings, Oriental and Modern and Contemporary Art. His collection demonstrates his wide range of interests and passion for collecting. In 1949, he bought the Palazzo Grassi through SNIA Viscosa, and founded the ‘Centro Internazionale delle Arti e del Costume’. Even through both wars, Mr. Marinotti kept being a supporter of artists, such as the members of the Futurists Movement, as well as ceramics artists and even archaeological sites, which showed once again his extraordinary strong, complex character and unique vision through his career and pursuit of arts and culture. It is possible that his impressive collection of Chinese archaic bronzes and jade and jadeite carvings was acquired during his travels to China in the early 20th century. 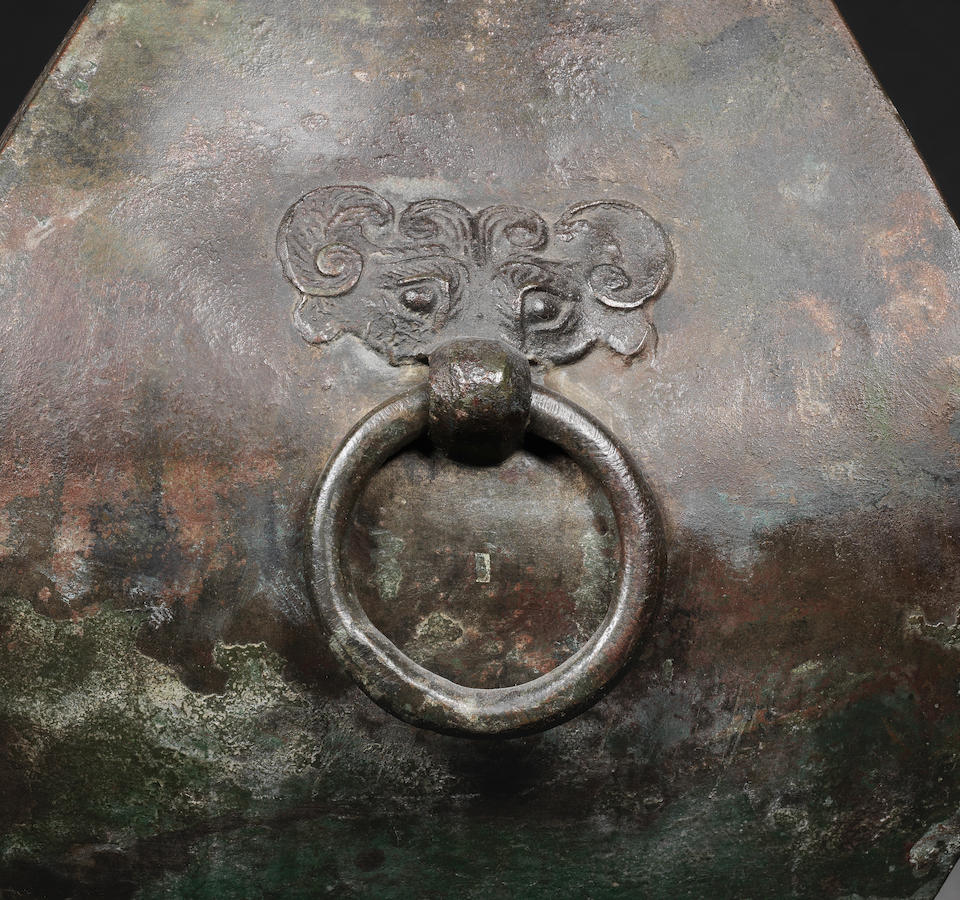 The square vase with a bulbous pear-shaped body rising from a tall, slightly splayed foot, tapering to an everted stepped rim, set on two opposing facets with a pair of taotie mask handles suspending loose rings. 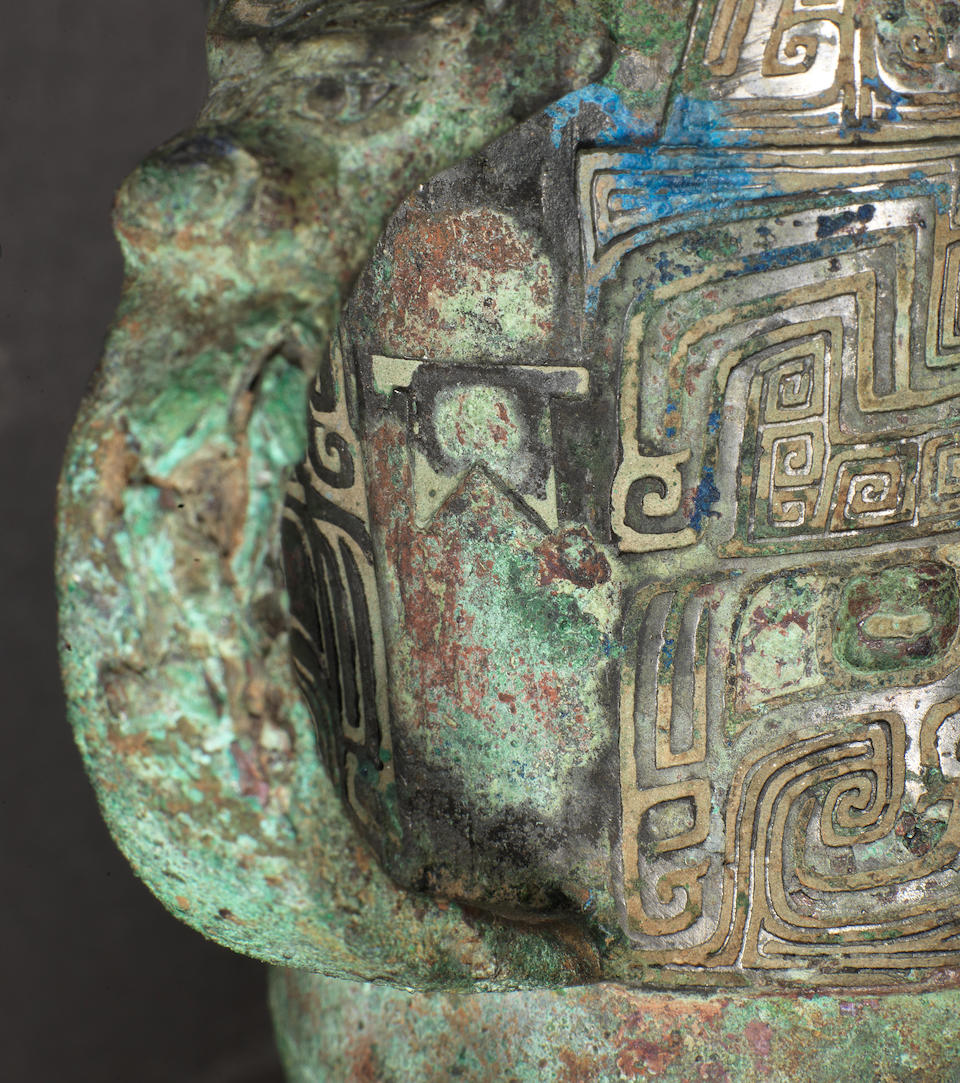 Raised on three splayed blade-shaped legs, cast to each side with a broad register containing two pairs of taotie masks with raised eyes on a leiwen ground of asymmetrical scrolls, bisected by a low flange to one side, the other with a loop handle issuing from an animal mask containing a pictogram beneath, all below upright triangle lappets and a pair of stylised gui dragons to the concave spout, flanked by two prominent post caps bearing whorl designs, fixed stand.

Note: The pictogram below the handle reads bing, which is a clan symbol. 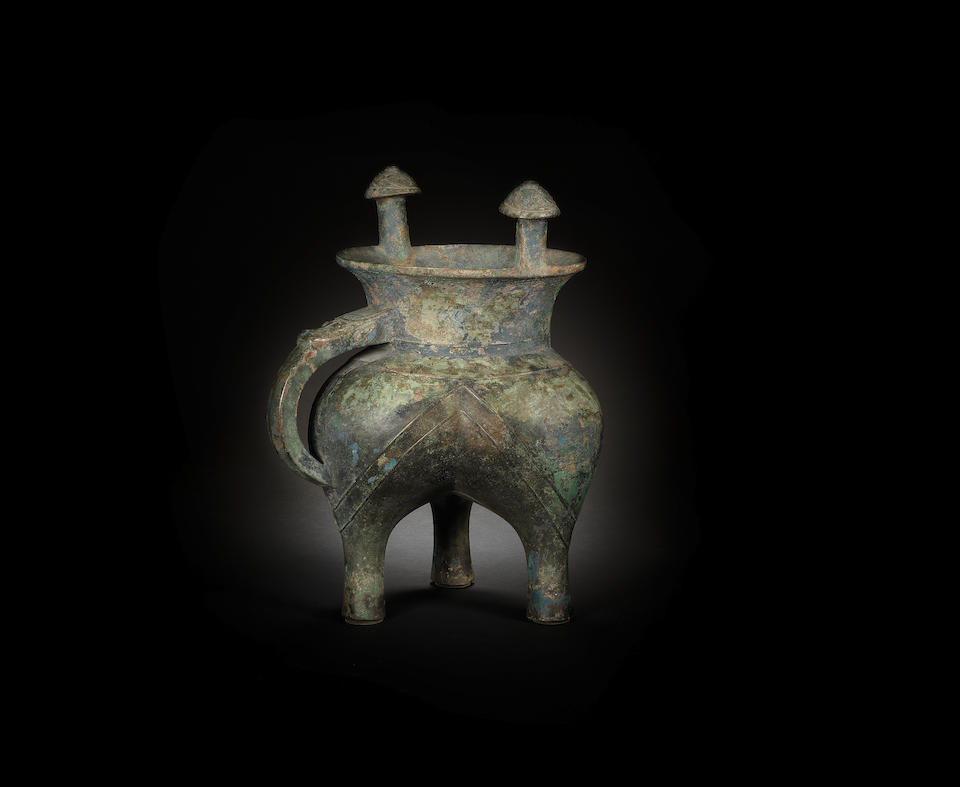 The bulbous vessel divided into three bulging lobes each elegantly tapered to a straight leg, simplistically cast with a pair of bow-strings encircling and outlining the lobes in zigzag form, with a further bow-string to the tall cylindrical neck set with a buffalo head issuing a loop handle, rising to a gently flaring rim bisected by a pair of prominent posts with domed caps bearing whorl designs, an inscription beneath the handle reading 'yong quan (hu) fu yi'.

Note: The inscription yong quan (hu) fu yi may be translated as: for the use of Ancestor Fu Yi of the Quan (or Hu) clan

The present rare lobed jia is a direct continuation of the tripod wine vessel form, elements of which can be seen as early as the late Xia period, 18th-16th century BC, continuing until the middle Western Zhou period. Towards the end of the Shang dynasty the jia had developed the li-shaped body with a tri-lobed form, as seen on the present lot, which then continued onto the Western Zhou period; see C.Deydier, Archaic Chinese Bronzes, I, Xia & Shang, Paris, 1995, pp.237, 239. Of compressed globular form rising to a flaring mouth, the waisted neck flanked by a pair of loop handles issuing from the masks of a ram, cast with a narrow register containing two pairs of confronted stylised gui dragons with raised eyes on a leiwen ground, bisected by an animal mask in high relief to each side, the tall spreading foot similarly decorated with a further band of gui dragons, the interior cast with an impressed inscription reading 'ge yi', wood stand.

Note: Gui bronzes have been made intermittently from the Erligang period, as during the Shang period there was a preference for basins without handles (yu). However, during the Western Zhou period gui were produced in large numbers; see J.Rawson, Western Zhou Ritual Bronzes from the Arthur M. Sackler Collections, vol.IIB, Cambridge, Mass., 1990, p.347. It is likely that the inscription 'ge yi' may refer to a noble clan.

Compare a related but smaller bronze gui, Shang dynasty, illustrated by J.Rawson, ibid., p.481, fig.64.4, which may indicate that the present lot was made during the very end of the Shang dynasty or early Western Zhou period.

Commentaires sur Chinese Archaic Bronzes from the Franco Marinotti Collection at Bonhams, 14 May 2015