LONDON.- The passion for collecting often knows no bounds. In the case of Czech-born Albin Schram (1926-2005), that passion was not only boundless, but also intensely personal. From small ink musings to studies for major works of art, the wonderful array of sketches assembled by Schram was borne out of a fascination with the lesser known personalities of historic greats. Together, they reveal the private sides to some of the greatest artists of the twentieth century, including Edgar Degas, Paul Klee, Emil Nolde, Félix Vallotton, James Ensor, Camille Pissarro, Lyonel Feininger, Alfred Kubin and countless others. Some forty works from his extraordinary collection will be offered by Sotheby’s later this month, in an online sale entitled The Artist’s Sketchbook: Where Inspiration Finds Form. Bidding will be open from 22 May until 4 June.

Schram began collecting in the 1960s, following several eventful decades during which he was Russian prisoner of war, a civil servant in the justice ministry, a banker and a legal historian. Residing in Switzerland, his interest was ignited when his mother, Erika Schicht, gave him a letter written by Napoleon Bonaparte to his wife-to-be Josephine de Beauharnais. Attempting to defuse a furious quarrel, Napoleon writes: "I send you three kisses - one on your heart, one on your mouth and one on your eyes". It was an unexpected gift, as Schram had no particular interest in Napoleon other than his more general interest in history at large. The revelation of this intimate side of one of the most important players of modern history enraptured Schram and inspired him to seek out further letters and drawings by prominent figures of history.

Over the course of more than 30 years, Schram amassed a treasure trove of items that filled every corner of the home he shared with his wife Anne Bibot, who shared her husband’s curious and empathetic mind, and played an important role in shaping the character of the collection. His family recalls how he would repeatedly head off to auctions and return with newly-purchased sketches filling the pockets of his overcoat, and how the works were not put on display. Stored in cabinets, the sketches were not for anyone other than Schram himself, who was guided by a keen sense of the artist’s unique hand and character, and who sought out works that offered an insight into an intimate moment of thought and creation. His clever, discerning and playful taste is unmistakable in the selection of intimate, small-scale works that are now coming to auction. This beautiful sketch by Camille Pissarro, a highly-finished pastel composition over one of his monochrome etchings, depicts a woman in her vegetable garden, a motif that the artist revisited throughout his career. Of the core proponents of the Impressionist group, it was Edgar Degas, Mary Cassatt and Pissarro who were most enamoured with the processes of printmaking. Enjoying the shared space between fine art and the art market that printmaking offered, they elevated the basic concept of replicating an image for commercial reasons, emphasising handicraft through idiosyncratic and often complicated techniques. The size and intricate detail of their prints also chimed with their shared preference for intimate exhibitions and works. This exceptional ink sketch by Felix Vallotton shows Parisians rushing to shelter from the rain. The composition is part of a series of six drawings, entitled L’Exposition Universelle, depicting scenes from the April 1900 World’s Fair in Paris – the event which enshrined Paris as the cultural epicenter of the world. Typical of Vallotton’s wry view of contemporary society, he punctures the grandeur of the occasion by depicting scenes of prosaic activity. These six sketches were turned into a celebrated series of woodcuts; this image exists in its print form in the collections of the Museum of Modern Art, New York and the Minneapolis Institute of Art. This charming sketch depicts a scene from Shakespeare’s A Midsummer Night’s Dream. In the winter months of 1910-11, Nolde and his wife Ada were given front row seats at Max Reinhardt’s theatre for the duration of the season. In these seats, warm under the spotlight, Nolde produced quick sketches in concentrated colours and bold lines. Ada held the pigments and passed her husband sheets of paper; she would then retrieve the finished sketches and carefully allow them to dry in her lap. The result was a rich and whimsical series of theatre watercolours, of which this work is one magical example.

The authenticity of this work has been confirmed by Professor Manfred Reuther on the basis of photographs; the work will travel to Germany after the sale to obtain its certificate and be available to the purchaser shortly thereafter.
Provenance: Collection Albin Schram, Switzerland
Thence by descent to the present owners. This tempera and gouache sketch hails from the ominous realms of Kubin’s imagination. Departing from the nightmarish themes of some of his other compositions, Kubin here depicts a more earthly threat: a bison ready to charge. Through detail and form, he conjures a disquieting sense of immediacy. Kubin was fascinated in Darwinian theory, and the survival of the fittest, frequently depicting magnificent beasts at the peak of their might. At times, the depiction of these beasts veered into the fantastical as he developed them into hybrid forms. Kubin’s spectacular drawings inspired Kafka and his own literary world of existential anxiety and menace.

The authenticity of this work has been confirmed by Dr. Peter Assmann.

Provenance: Marianneum Collection, Vienna (a gift from the artist)
Collection Albin Schram, Switzerland
Thence by descent to the present owners. By the late 1890s, Feininger was one of Germany’s best-known caricaturists and illustrators. In 1906, he was picked by the Chicago Tribune to publish cartoons in the comics section of their Sunday paper. Today he is more widely lauded as an intellectual who taught at the Bauhaus and whose integrity as an avant-garde artist had him declared degenerate by the Nazis. However, his sensibility tended more towards lightness, urban frivolity and an astute eye for the humorous. This small sketch of a running man hunched into his hat, with lanky limps and a goofy gait, is a testament to the artist’s lesseracknowledged proclivity for the comedic. It relates to his oil painting, Newspaper Readers, also dating to 1909 and in the Whitney Museum of American Art, New York, depicting men hurriedly rushing around town.

Achim Moeller, Managing Principal of The Lyonel Feininger Project LLC, New York – Berlin has confirmed the authenticity of this work, which is registered under no. 1652-04-21-20. A certificate of authenticity accompanies the work. Synonymous with excellence, excess and artistic revolution, the Bateau-Lavoir (situated on rue Ravignan) was a crumbling squat house which at various stages housed Pablo Picasso, Guillaume Apollinaire, Georges Braque and Amadeo Modigliani, to name just a few. It was where Picasso painted both Les demoiselles d'Avignon, and Garçon à la pipe. This work depicts the Bateau-Lavoir from La Place Ravignan with one of Montmartre's famous moulins beyond. Depicting the scene clouded in a rich Parisian haze, Kupka captures the dynamism and mystique of this iconic location. As the cobbled street winds its way down to Paris beyond, Kupka focuses his attention on the modest house, an accidental bystander to some of the most significant developments in the history of Modern art.

The authenticity of this work has been confirmed by Pierre Brullé. As an artist, Kirchner was a chronicler of contemporary life. He moved to Berlin in 1911 and zealously depicted the frenzy and character of the electrically-lit capital city. Dancing figures became a recurring theme in his work and it continues to be considered a cornerstone of his oeuvre, with examples held in public collections around the world. Kirchner believed that dancing put people in touch with their basic urges and he relished giving form to its inherent sensuality and dynamism.

This work is listed in the Ernst Ludwig Kirchner archives, Wichtrach/Bern.

Provenance: Estate of the artist (until 1954)
Galerie Nierendorf, Berlin (until 1967)
Collection Albin Schram, Switzerland
Thence by descent to the present owners. This mesmerising work is a depiction of a scene from the story of Olindo and Sophronia, as told in the Renaissance poem Gerusalemme Liberata (Jerusalem Delivered), written by Torquato Tasso in 1581. Degas’s beautiful pastel drawing captures the climactic moment when Olindo and Sophrinia are tied to a stake, claiming responsibility for a crime that neither committed in order to save the other. The epic poem, a frequent subject for artists in the Baroque period and beyond, ponders the enduring conflict between love and duty. In both palette and form, Degas appears to pay homage to Delacroix’s famous composition, in the collection of the Neue Pinakothek in Munich. The artist’s shimmering layers of pastel masterfully evoke the wind that encircles the tormented lovers. 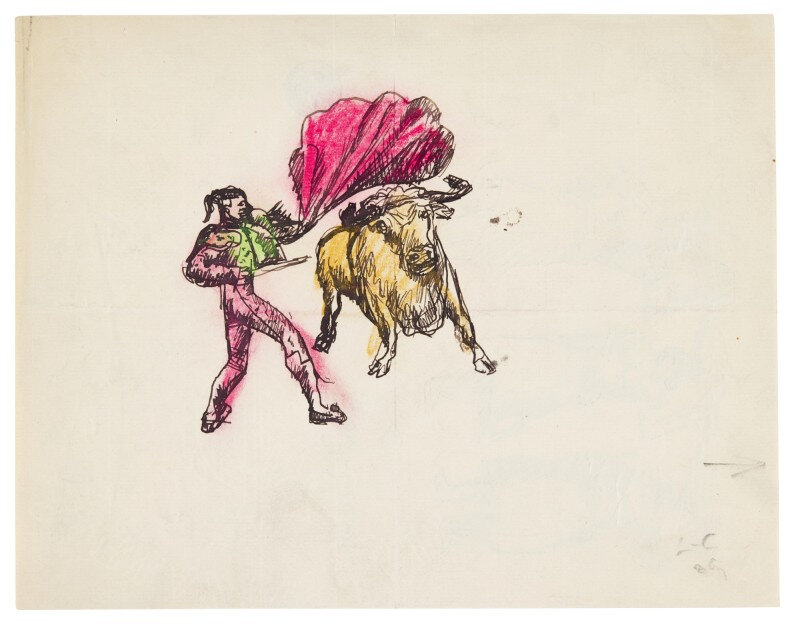 Swiss-born Le Corbusier made his name as an architect and was one of the pioneers of what is now known as ‘Modern Architecture’. In 1929, Le Corbusier spent 100 days on a conference tour travelling throughout South America, flying at the courtesy of a young aviator named Antoine de Saint-Exupéry. This same Antoine de Saint-Exupéry would later go on to write The Little Prince. During his trip, Le Corbusier visited several cities including Buenos Aires, where he sketched this joyous depiction of a torero. He was inspired by the vibrant city and sketched prolifically; he also developed a visionary architectural masterplan for Buenos Aires which – though never realised – cemented Le Corbusier’s reputation and renown in South America.

The authenticity of this work has been confirmed by Eric Mouchet.