Belvedere opens first monographic exhibition of the Master of Mondsee

Belvedere opens first monographic exhibition of the Master of Mondsee Master of Mondsee, Adoration of the Magi, from the shrine wings of the so-called Mondsee Altar, before 1499 © Upper Austrian State Museum, Linz.

VIENNA.- As part of its IN-SIGHT series, the Belvedere is dedicating a first monographic exhibition to one of the most significant late-medieval painters in Austria: the Master of Mondsee. It centers on the work that gave this anonymous artist his name—the paintings from a Gothic winged altarpiece that were probably once in the abbey church at Mondsee.

Stella Rollig, CEO of the Belvedere: “This time our focus is on an outstanding artist in Austria around 1500 and a major work in the Belvedere’s collection of medieval art. For the first time, this show is bringing together all the surviving works from the Mondsee altarpiece and placing this masterpiece in an art- and cultural historical context.”

Enchanting depictions of the Virgin Mary, crowded scenes from the childhood of Christ, learned Church Fathers in their studies, and, last but not least, the atmospheric spring landscape from the Flight into Egypt define the varied oeuvre of the Master of Mondsee. This virtuoso painter contributed to a final flowering of the art of the Late Gothic altarpiece at the end of the Middle Ages. By bringing together all the surviving panels from the Mondsee altarpiece, this exhibition provides the first opportunity to appreciate this outstanding work of art as a whole.

Veronika Pirker-Aurenhammer, curator of the exhibition: “This show finally reunites the scattered ensemble of paintings from the Mondsee altarpiece after more than two hundred years. It was only in 2015 that the long-lost final painting from the series was acquired by the Oberösterreichisches Landesmuseum in Linz. Now, for the first time, we can present the Master of Mondsee’s work in conjunction with the latest research.” Master of Mondsee, Escape to Egypt, from the predella of the so-called Mondsee Altar, before 1499. Photo: Johannes Stoll © Belvedere, Vienna. Master of Mondsee, Maria as temple virgin in the ear dress; from the predella of the so-called Mondseer Altar, before 1499. Photo: Johannes Stoll © Belvedere, Vienna.

The IN-SIGHT series of exhibitions was devised in order to analyze and present artists and works from the Belvedere’s collection. The Mondsee altarpiece at the heart of the show is the only established work by this painter, whose name, like so many medieval masters, is unknown. Eight paintings have survived from the lost altarpiece and are distributed across three different collections. The five most well known are in the Belvedere. Two panels were recently acquired from private collections by the Oberösterreichisches Landesmuseum in Linz and one work is in the Liechtenstein Princely Collections, Vaduz–Vienna.

These two most recent acquisitions have filled a gap in public access to this important ensemble of pictures, which had been separated and scattered following the dissolution of Mondsee Abbey in 1791. The Gothic altarpiece itself—its framework and carvings— probably fell victim to Mondsee abbey church’s earlier conversion into the Baroque style. This makes it all the more fortunate that the paintings from the altarpiece wings escaped destruction and can now be shown together for the first time.

The work is introduced from various perspectives and set in a “frame narrative” outlining the historical context, the art of contemporaries, and various sources of inspiration for the subject matter. Part of the exhibition is devoted to the commissioning of the altarpiece by Abbot Benedikt Eck von Vilsbiburg, who appears as the donor in one of the paintings together with the Mondsee coat of arms. Mondsee abbey church was rebuilt in Gothic style during his abbacy. Earlier on Benedikt had commissioned Michael Pacher to create the high altarpiece at St. Wolfgang pilgrimage church, an important influence for the Master of Mondsee. A selection of comparative works demonstrate how the Master of Mondsee engaged with the art of Michael Pacher as well as with prints and other visual sources. There are many indications that the painter had a remarkably wide education and was familiar with Netherlandish art. But he absorbed these influences in a highly individual way giving rise to such an unmistakeable style.

One chapter in the exhibition examines the painter’s highly detailed underdrawings revealed by new infrared reflectographs from the Belvedere’s conservation department. These testify to the Master of Mondsee’s skills as a draftsman and offer fascinating glimpses of the creative process behind the images. 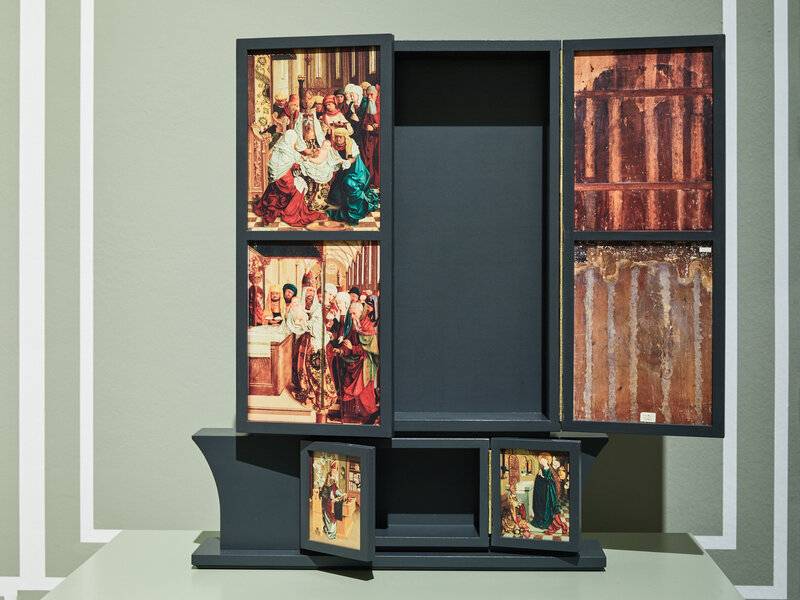