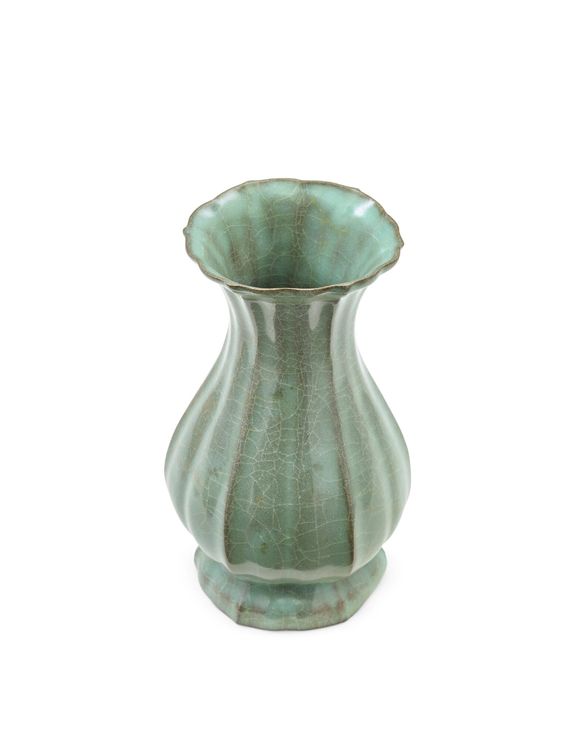 the baluster body elegantly rising from a splayed stepped foot to a waisted neck and a gently flared lipped rim, the body divided into six lobes of bracket foliations, covered overall with a greyish blue-green glaze suffused with a dense network of light beige crackles, the unglazed foot rim fired to a reddish-brown colour, Japanese wood box.

Note: This extraordinary vase, modelled with generous proportions marked by well-defined barbed outlines, is an extremely rare embodiment of the ideals of Song (960-1279) court aesthetics in its understated simplicity that veils the depth of expertise and skill required in creating such a vessel. The grey body that has fired a dark purplish brown along the unglazed footring and is vaguely perceptible where the soft crackled grey-green glaze thins is characteristic of Southern Song guanyao ware.

The full and barbed form of this pear-shaped vase is extremely rare and no closely related example appears to be recorded although it bears similar characteristics with the more commonly seen guanyao lobed vases that were created by vertical moulding in two halves, such as one from the Maxwell Vos collection, sold in our London rooms, 13th March 1973, lot 171; and another sold in these rooms, 27th October 1992, lot 20.