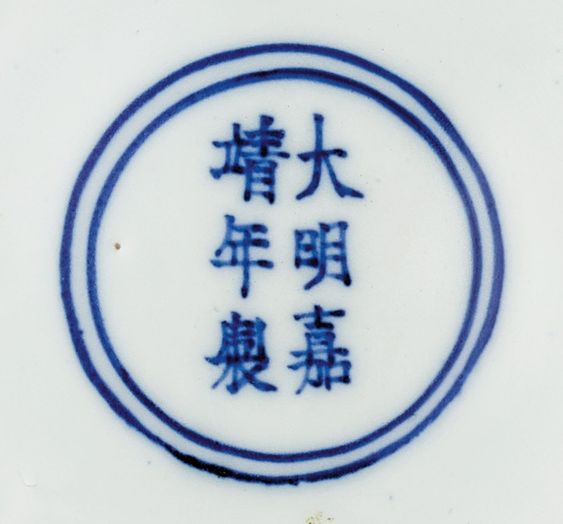 well potted, the rounded sides gently rising from a straight foot to a flaring rim, the interior centre incised with a pair of confronting phoenix, the exterior similarly decorated with two phoenix flying among scrolling clouds, above a ring of radiating lotus petal lappets, the base inscribed with a six-character reign mark in underglaze blue within a double circle.

Note:This bowl is rare for its large size and anhua decoration of phoenix. A closely related bowl was sold in our Hong Kong rooms, 29th November 1977, lot 61. Compare also a smaller bowl from the Hellner Collection, illustrated in Leopold Reidemeister, Ming Porzellane in Swedischen Sammlungen, Berlin, 1935, pl. 34b; and another sold in these rooms, 15th November 1988, lot 154. Bowls of this size but engraved with dragons are also known; see one sold in these rooms, 26th November 1976, lot 460; and another from the E.T. Hall collection sold at Christie's London, 7th June 2004, lot 52.

For a bowl attributed to the Yongle period with a pair of anhua-decorated phoenix, see one illustrated in Regina Krahl, Chinese Ceramics from the Meiyintang Collection, vol. 2, London, 1994, pl. 648; and another published in John Ayers, The Baur Collection, Geneva, vol. 2, Geneva, 1969, pl. A142.