LONDON - Bonhams is to offer Islamic coins for the first time as part of the forthcoming Islamic and Indian sale on 11 June in London. Leading the sale will be An Umayyad Gold Dinar from the Reign of 'Abd al-Malik (AD 685-705). The Year 77H Dinar is an extremely rare example of the first Islamic coin and has an estimate of £100,000-150,000.

The coin dates from the reign of Abd al-Malik, who was a member of the first generation of born Muslims. It seemed inconceivable to him that the flourishing Umayyad Caliphate did not have a currency of its own – that affairs of state, and everyday commerce, were being conducted using Byzantine coinage, or copies of it, featuring Christian symbols and images of foreign leaders. Following a period of development and transition, which saw the production of a de-Christianised Byzantine solidi – a proto-type gold coin depicting a standing Caliph – The Year 77H Dinar, the first entirely Islamic coin, was produced.

Head of Bonhams Islamic and Indian Department, Oliver White, commented: "The Year 77h Dinar is fascinating, and its significance to early Islamic history cannot be overstated. In an age before printing and modern communications, coinage was the most effective tool a government possessed to sway the hearts and minds of the people. Anyone bearing this coin carried with them a powerful religious message, which explained to new followers the principle tenets of the new faith. The 77h Dinar, the first purely Islamic coin, formed the basis of almost a thousand years of subsequent coinage in the Islamic world – each coin spreading the word of Islam."

The coin is highly symbolic in its simplicity. There is no image, no reference to a ruler or a place. There are only statements of faith and a date, which is noted only in the context of the Hijrah. The central three lines simply read 'There is no god but God alone, He has no associate', with the reverse reading 'God is one, God is eternal, He does not beget, nor is He begotten'. Encircling the inside of the coin is the line, taken from the Qu'ran, 'Muhammad is the messenger of God, who sent him with guidance and the religion of truth that he might make it supreme over all religions', whist the reverse simply states, 'In the name of God, this dinar was struck in the year seven and seventy'.

Though the exact date on which this coin was introduced into circulation is not recorded, the rarity of this issue suggests that it was probably towards the end of the year 77, potentially to coincide with the pilgrimage season at the time of the 'Eid al-Adha. The coin offered is believed to be the only professionally graded example of the coin.

The coin section of the sale will also feature: 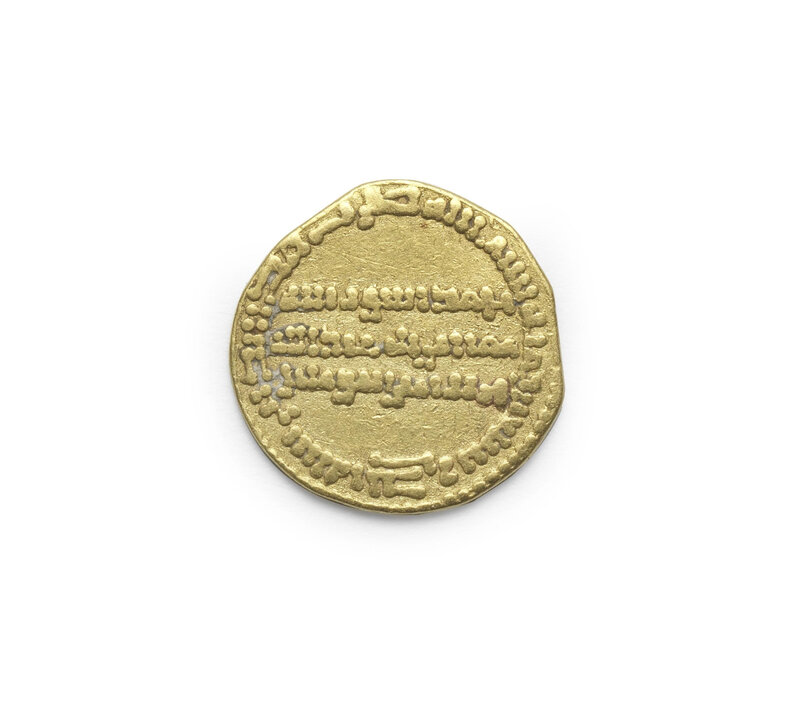 In the year AH 170 caliph Harun al-Rashid broke with tradition and placed his name on the coinage. For the years AH 170-171 his name and title were inscribed across the central reverse field citing him as Harun amir al-mu'minin, 'Harun Commander of the Faithful. Harun al-Rashid is best known as the ruler who appears in some of the tales of the One Thousand and One Nights, some of which are set at his court. 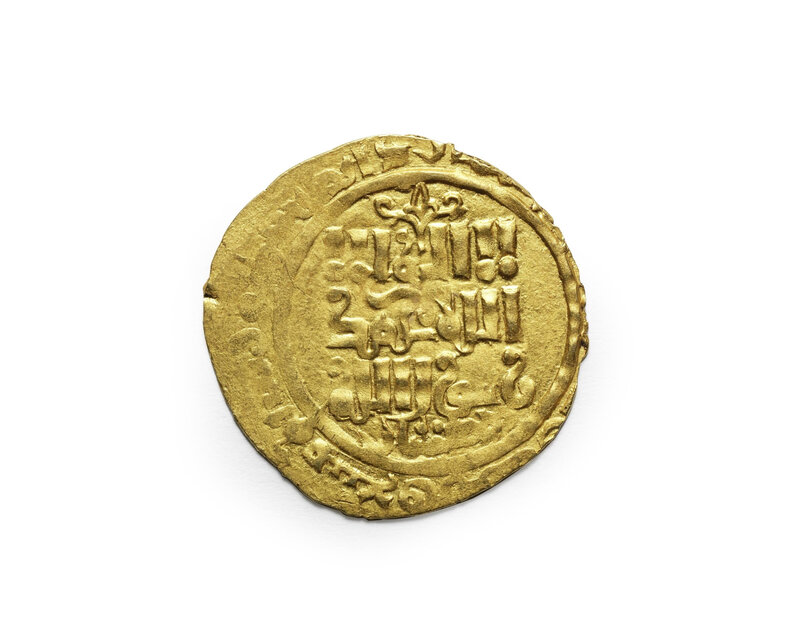 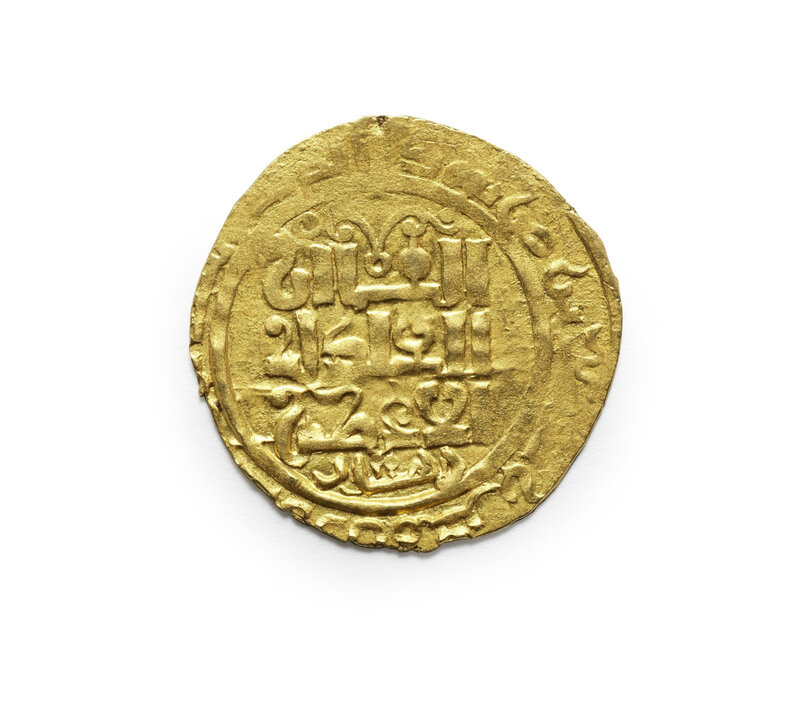 The coinage of the Great Mongols is generally of crude manufacture, functional but without care in its striking. The boldness of the calligraphy however provides the coins with an impressive feel reflecting their raw power. 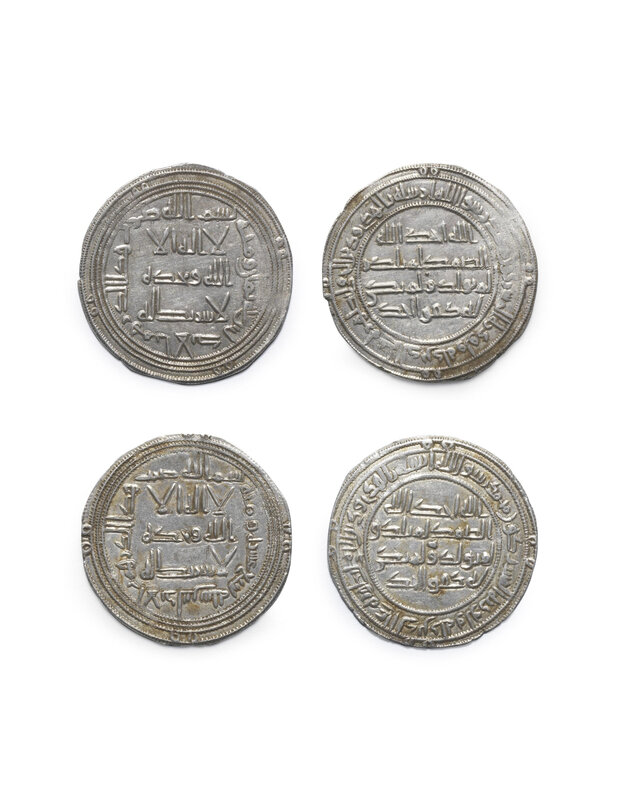 The Umayyad dirham for Andalusia was mainly struck for the payment of taxes and is very rare.

Other sale highlights include: 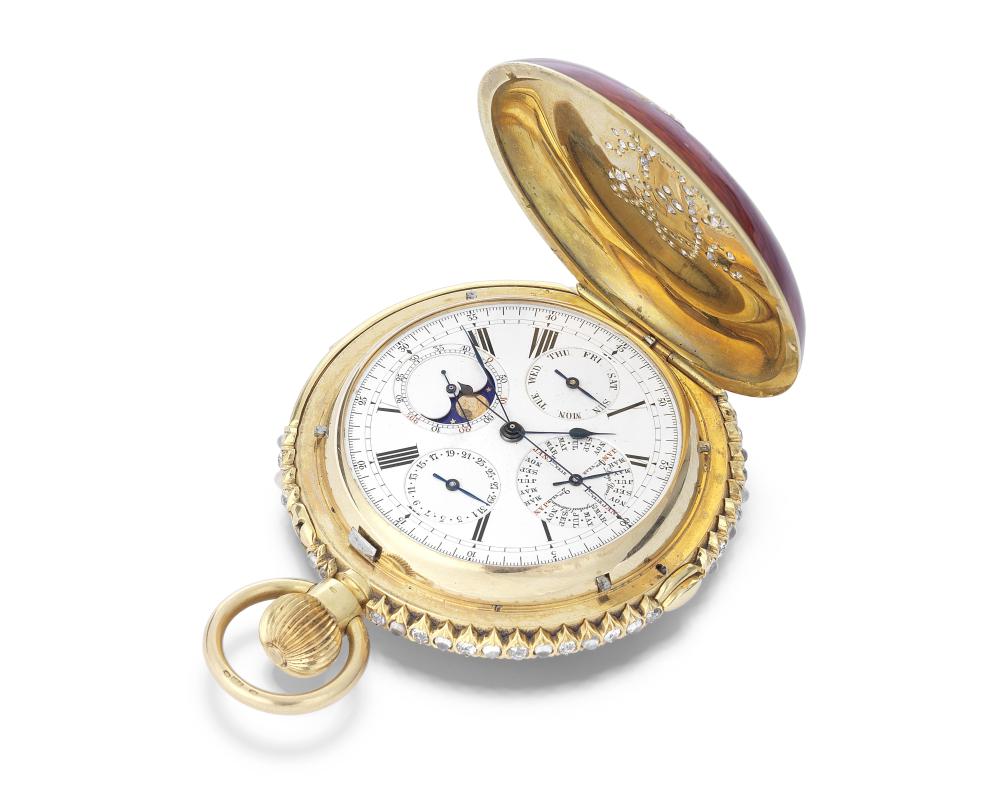 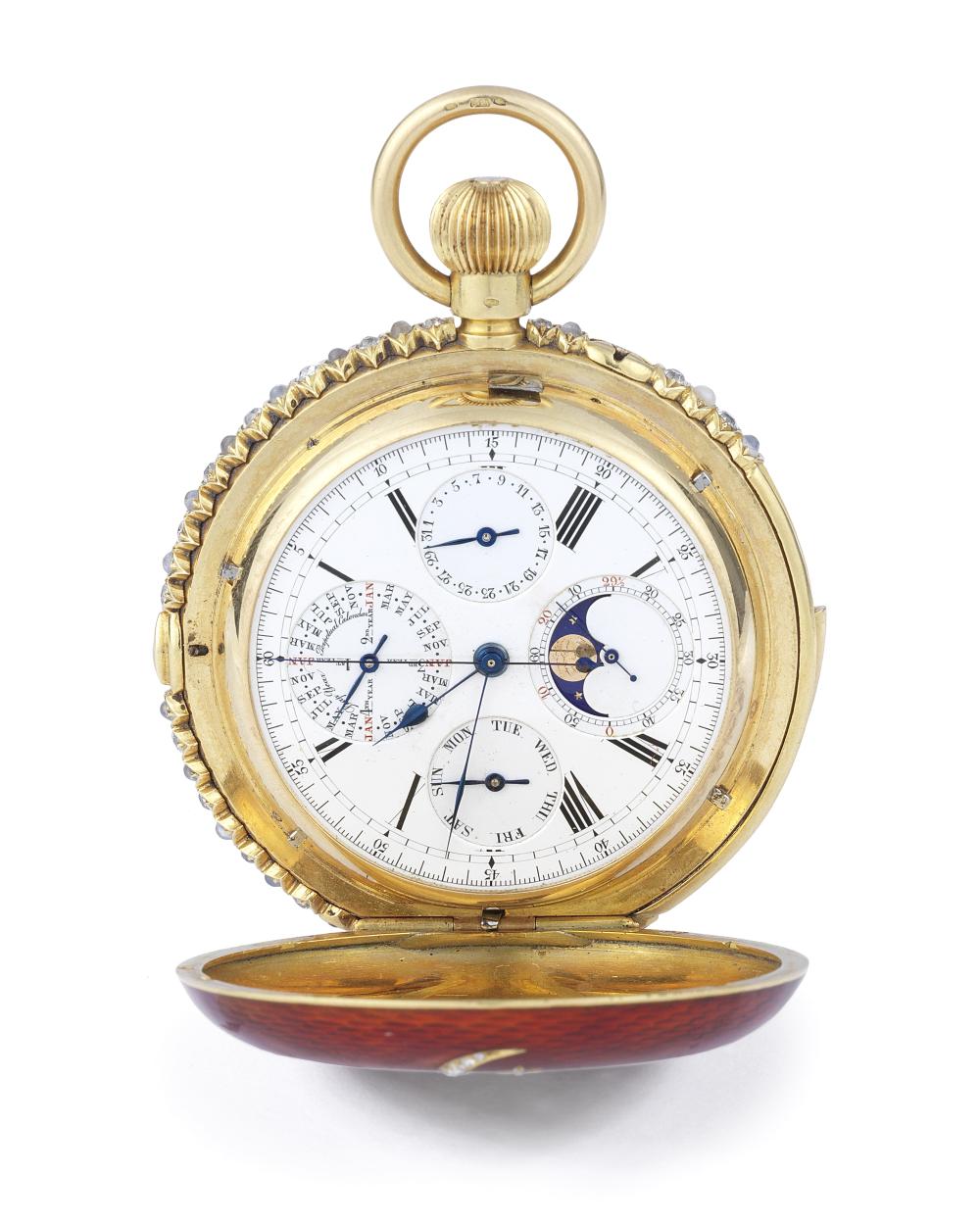 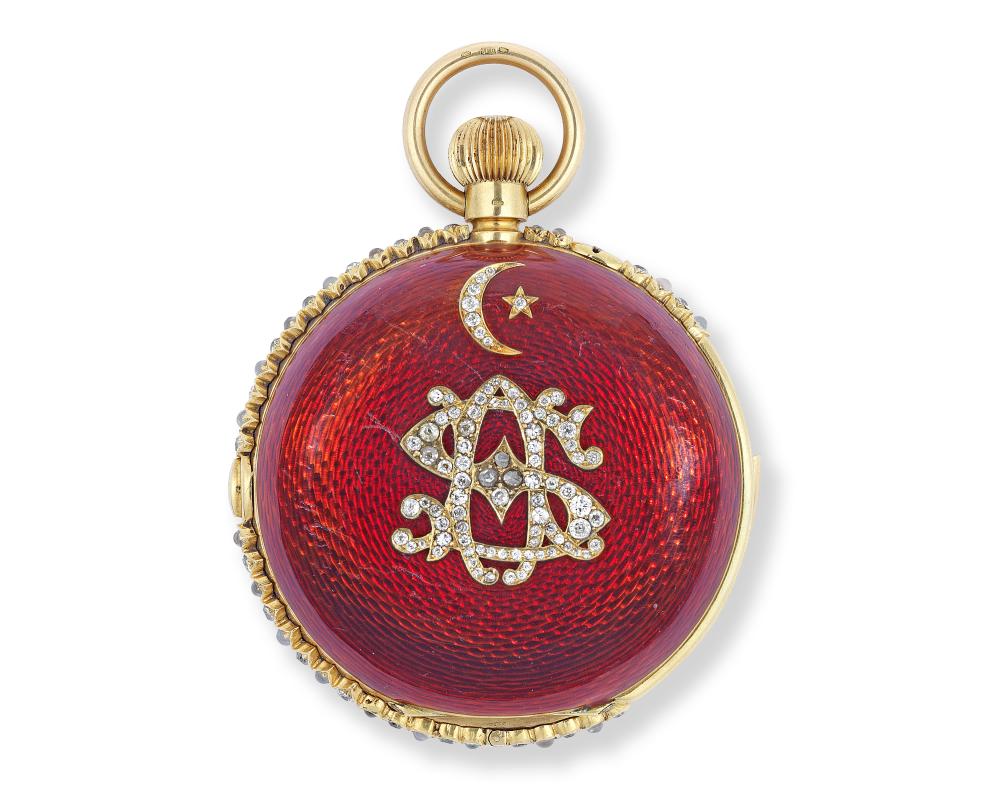 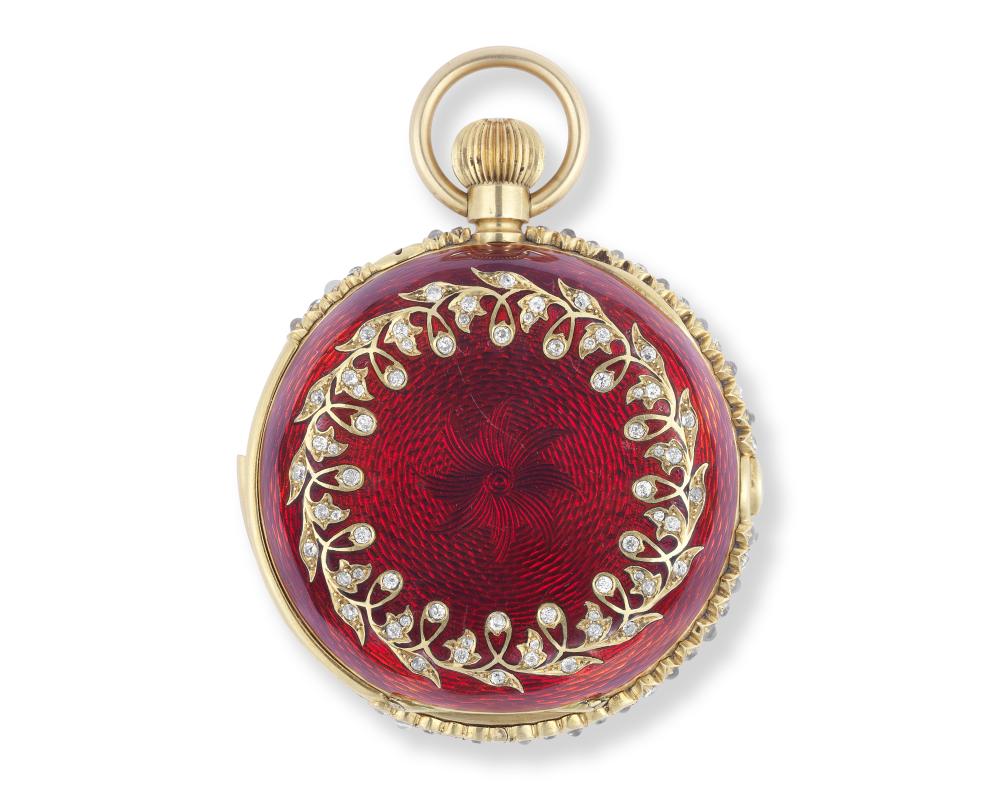 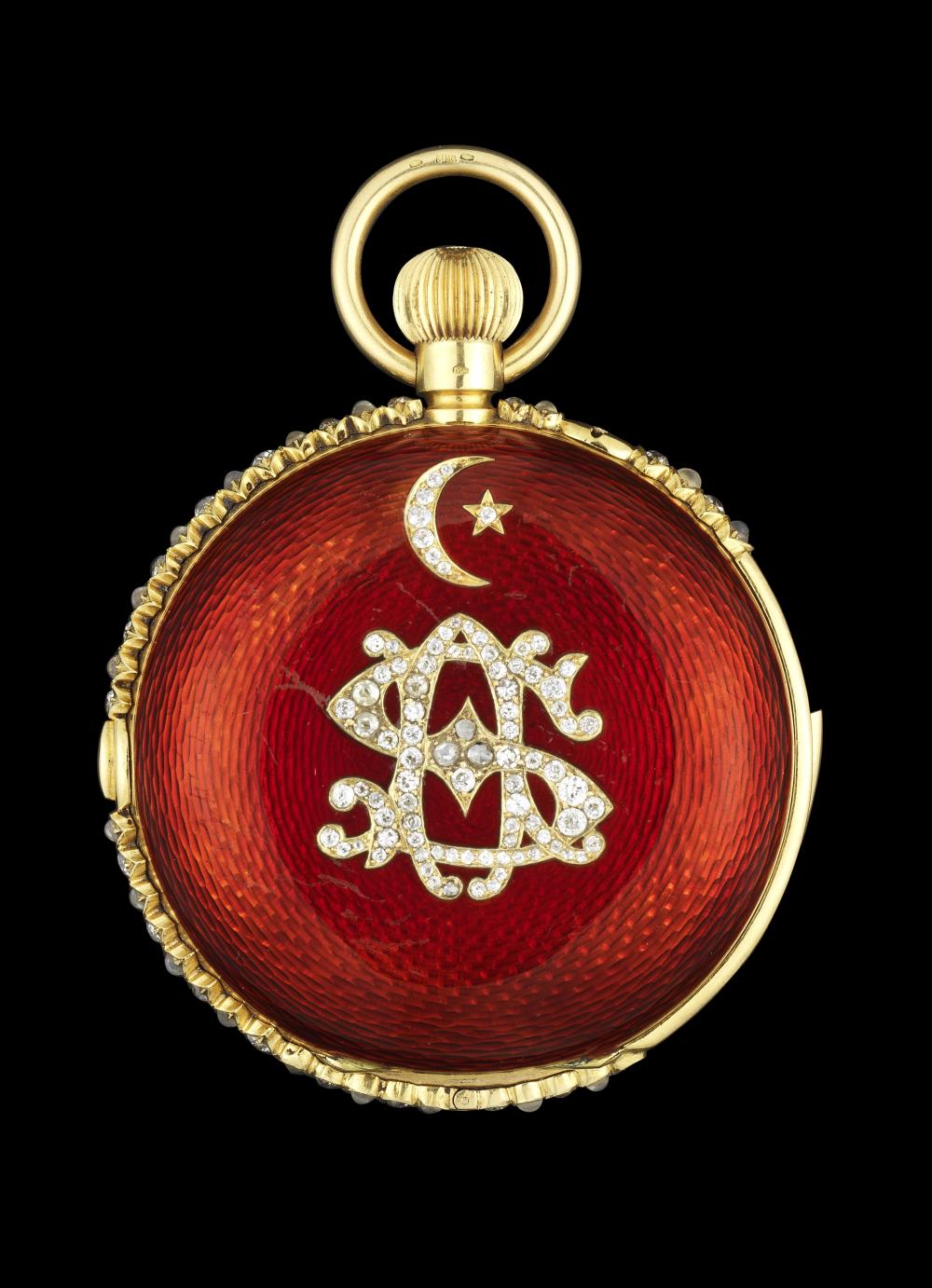 Awn al-Rafiq was born in Medina in 1841, a member of the Awn clan of sharifs and the fourth son of Sharif Muhammad ibn Abd al-Mu-in ibn Awnswas. On the death of his eldest brother Abdullah in 1877, he became the heir apparent and was summoned to Istanbul and appointed to the Ottoman Council of State with the rank of vizier. When his elder brother Husayn was assassinated in 1880, Sultan Abdulhamid, who suspected the late Emir of conspiring with the British to establish an Arab government in opposition to the Caliphate, decided not to appoint Awn al-Rafiq to the Emirate. The British ambassador in Istanbul, Austen Henry Layard, immediately intervened in the interests of the British who saw Awn al-Rafiq as 'liberal and enlightened', but the Sultan announced that he had already made his decision and appointed the role to a member of the Zayd clan. The Sultan, however, did assure the British that Awn al-Rafiq would be appointed following the death of the new Emir Abd al-Muttalib. Two years later, in 1882, Abd al-Muttalib was deposed and Awn al-rafiq became emir until his death in 1905. 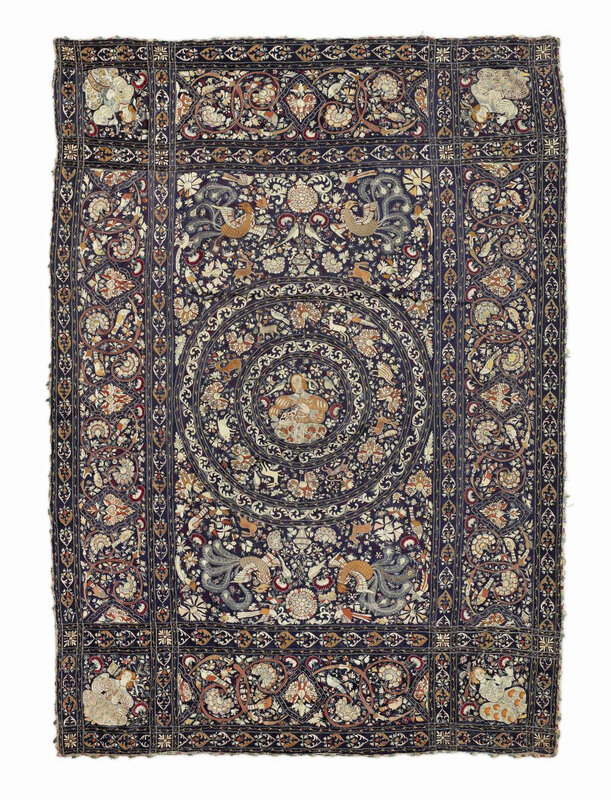 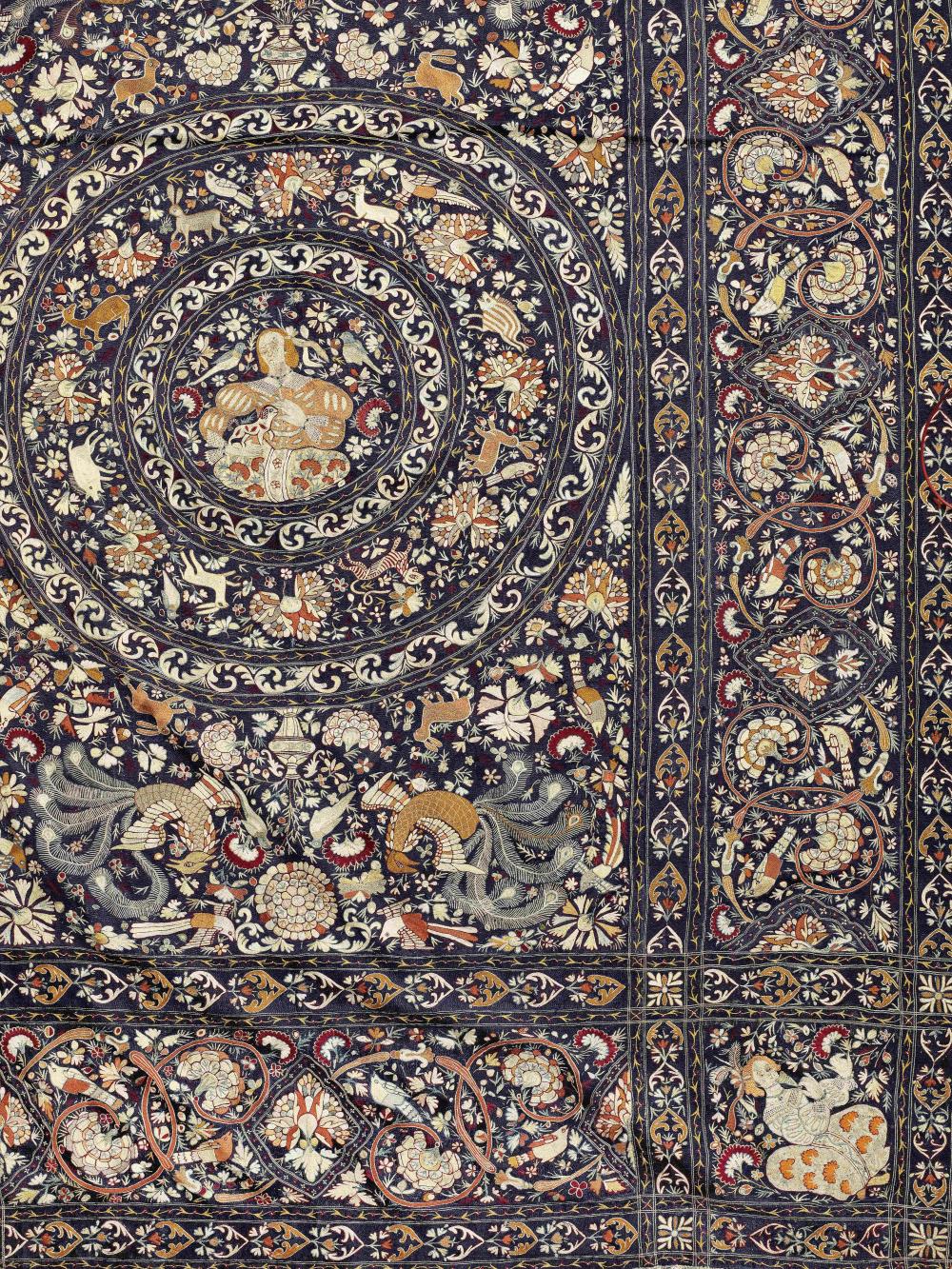 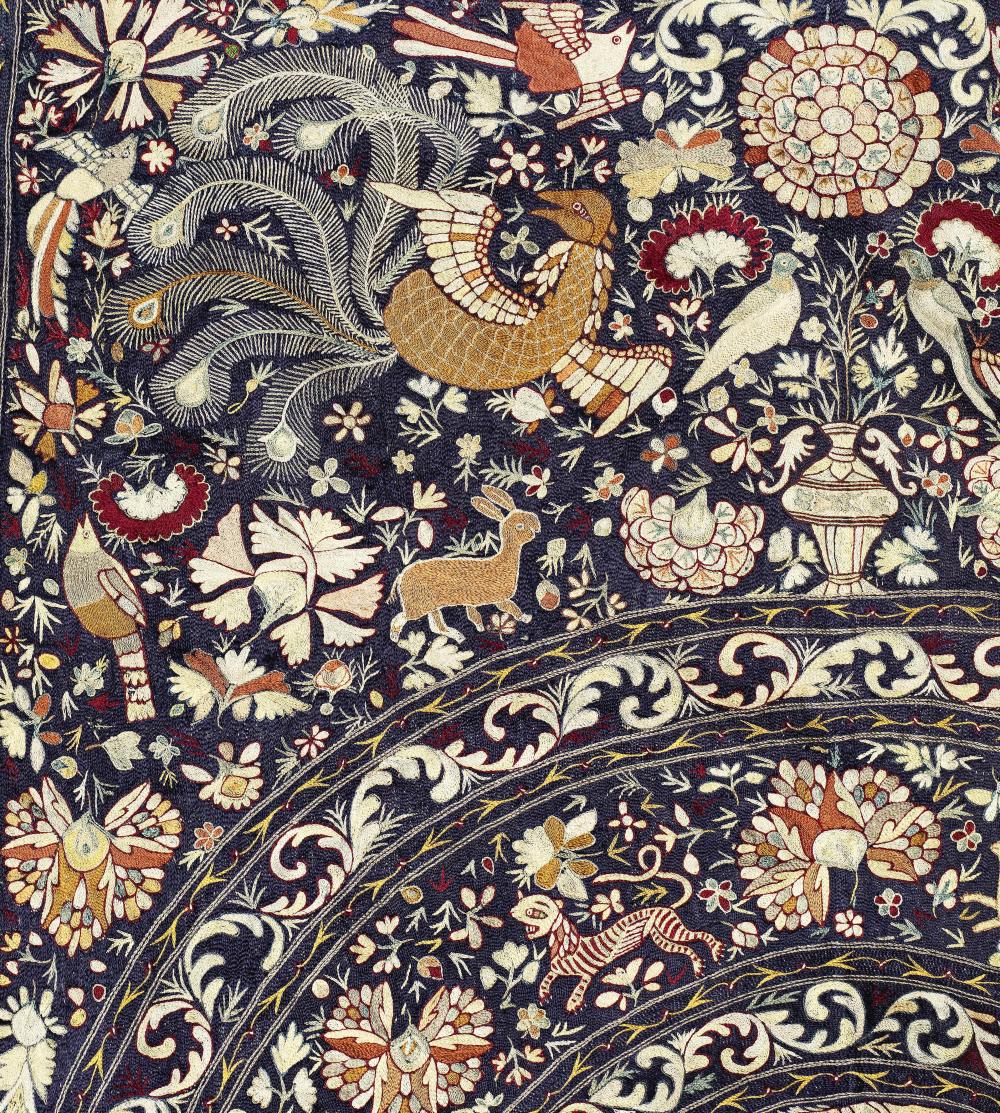 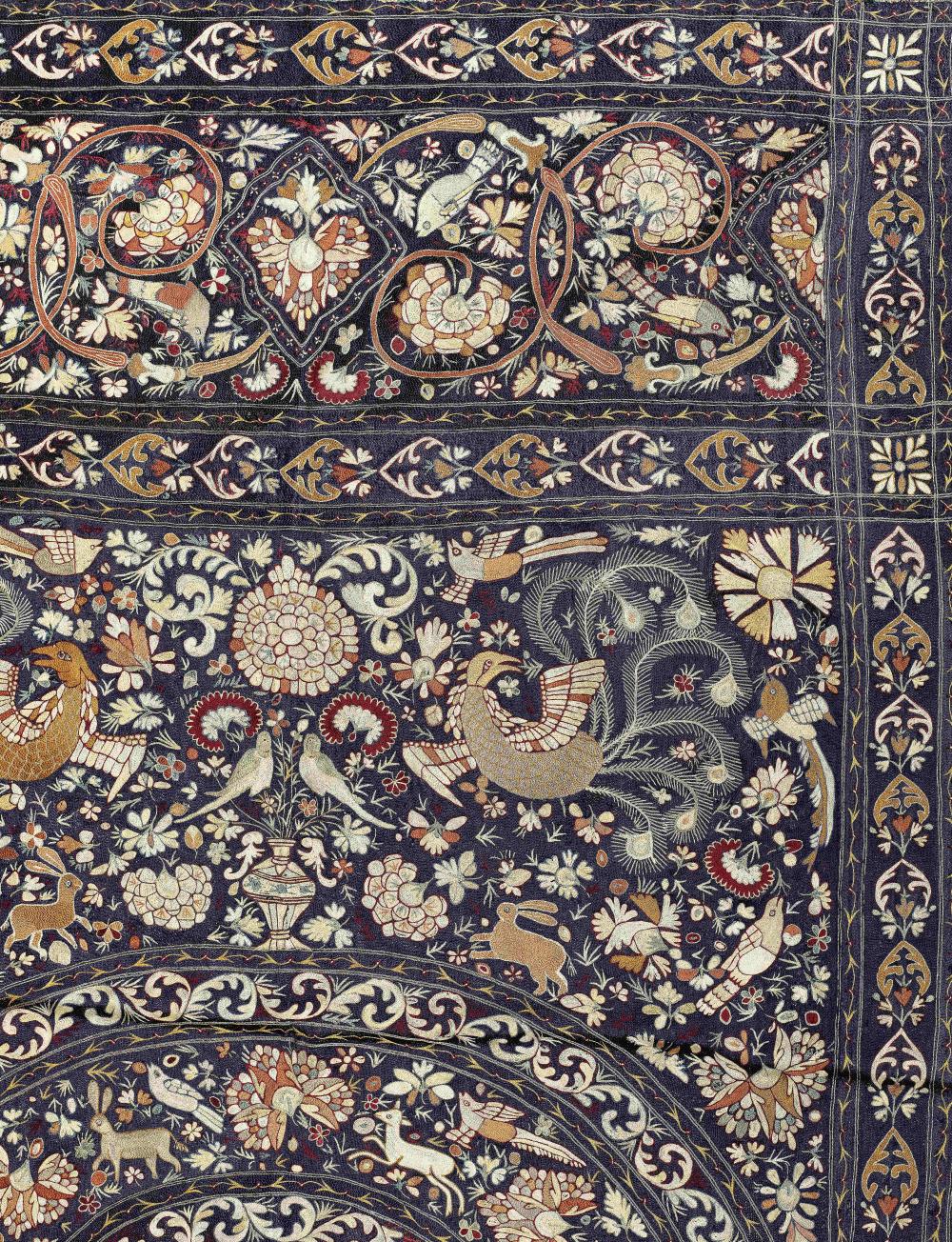 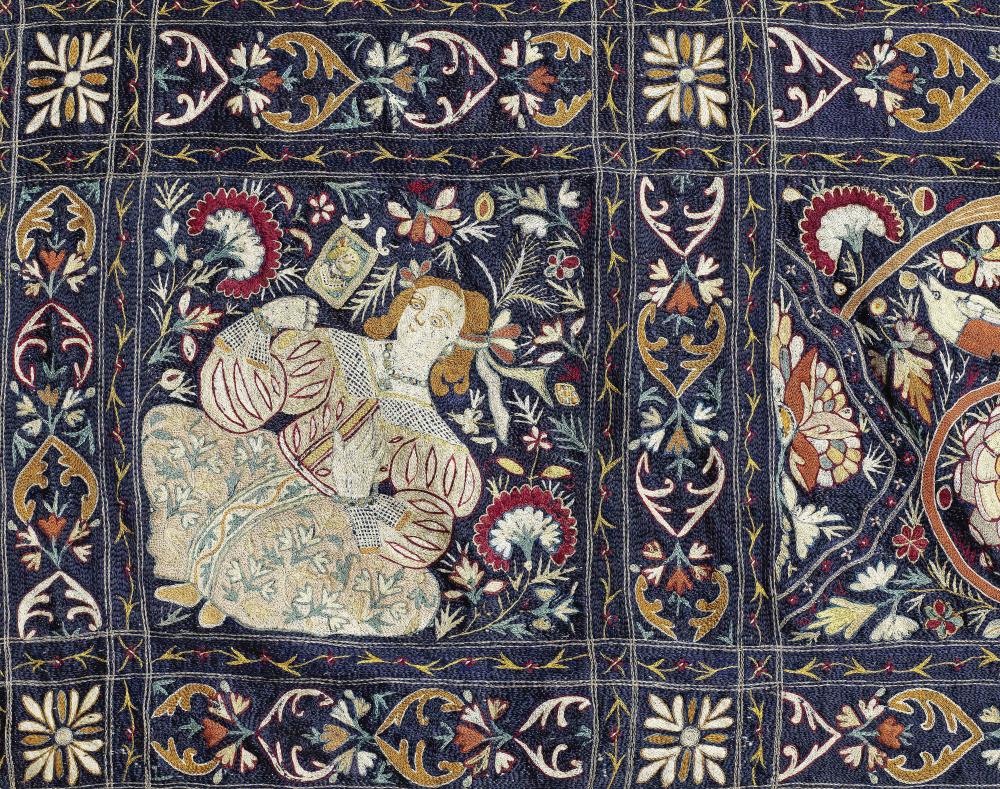 This coverlet is a fine and rare example of its type produced in India for the Portuguese market. It contains a combination of Indian, Persian and European elements that reflect the increasing cross cultural influences of the sixteenth and seventeenth centuries owing to greater trade, settlement and exploration. The five senses, depicted by five figures dressed in the characteristic seventeenth century style, form the central theme of this coverlet. A Renaissance-style border interspersed with two pairs of simurghs and floral sprays surround the central medallion. Whilst the Portuguese were the first to commission luxury goods like prized silk textiles, other European patrons followed suit from the early seventeenth century.

Comparable examples of colchas depicting the five senses are in the Museum of Fine Arts, Boston (Acc. No. 1998.587); the Philadelphia Museum of Art (Acc. No. 1988-7-4); the Museu-Biblioteca Condes de Castro Guimarães, Cascais, Portugal; the Art Institute of Chicago (Acc. No. 1982.18); and the Kunstgewerbemuseum, Berlin. Sir Elijah Impey was the East India Company's Chief Justice of Bengal from 1774 to 1782. He was a well-known patron of Indian artists, but his wife, Mary, Lady Impey, who joined him in Calcutta in 1777, was particularly interested in the flora and fauna of the surrounding area, creating her own menagerie. She then commissioned studies of animals and plants from various artists from the nearby city of Patna, though trained in the studios of the Nawabs of Bengal at Murshidabad in the 1750s and 60s. The most senior were the Muslim Shaykh Zayn-al-Din, and the Hindus Ram Das and Bhawani Das. The precision of these artists' technique, which stemmed from the Mughal tradition, appealed to British patrons. The series commissioned by Lady Impey (as well as others in a similar style by unknown artists) are particularly striking because of their large size, using sheets of English watermarked paper. There were 326 works in the original series (of which 197 featured birds, 76 of fish, 28 of reptiles, 17 beasts, and 8 of plants), which were brought back to England with the Impeys in 1783, and were sold at Phillips in London in 1810.

The Qa'ba is decorated annually on the 9th day of the month of Dhu al-Hijah, the day during the Hajj on which the pilgrims leave for the plains of Mount Arafat. The four walls are covered with curtains ( kiswah) and are encircled by a band ( hizam) embroidered with text from the Qur'an. The present lot is part of one of these bands.

The practice of decorating the Qa'ba dates back to pre-Islamic times and the Prophet Muhammad himself witnessed the ceremony of the covering of the Ka'ba as a six-year-old child. Under the Mamluks, Egypt became the supplier of the kiswah, and it became traditional to change it annually. Production in Egypt continued under the Ottomans until 1927 when it was decided that the King of Saudi Arabia should provide the textiles, and production was moved to Arabia, where it continues today. When the kiswah and the hizam were replaced, they were cut up and reserved for important dignitaries such as the Sharif of Mecca, but some fragments were also allowed to be sold in special shops near the Bab al-Salam.

The sale will be a live 'behind-closed-doors' auction on 11 June. An auctioneer will be present on the rostrum, and bids will be accepted in the following formats: online, on the phone, or by leaving an absentee bid. All bidding will be done remotely in accordance with the latest government guidelines.