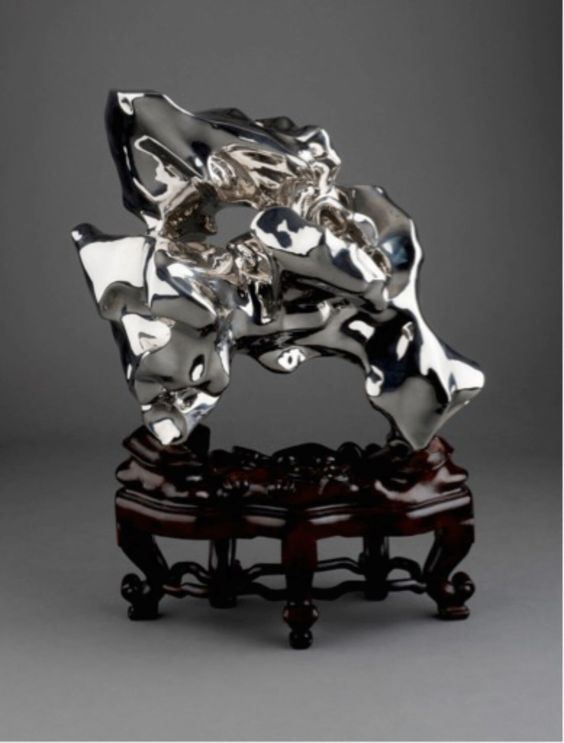 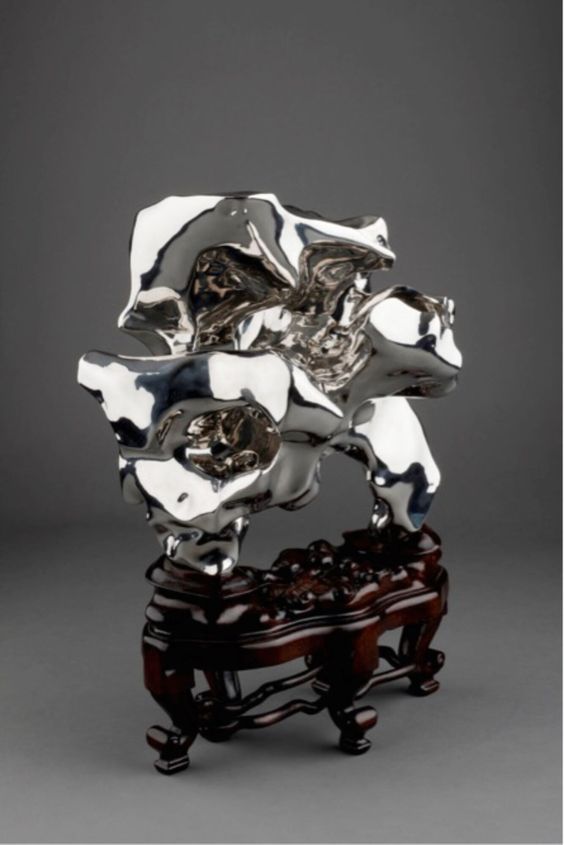 "Placed in a traditional courtyard, rock fragments used to satisfy people’s yearning for nature through their representation of rocks from nature. But huge changes in the world have made this traditional ideal increasingly outdated. I have thus used stainless steel to duplicate and transform natural rockery into manufactured forms. The material’s glittering surface, ostentatious glamour, and illusory appearance make it an ideal medium to convey new dreams.”
Zhan Wang

Note: Zhan Wang is widely recognized as one of China's leading contemporary artists today, and his conceptual sculptures have been exhibited in numerous countries and collected by major public museums including the Metropolitan Museum of Art, New York. Born in Beijing in 1962, Zhan attended Beijing Industrial Arts College and the Central Academy of Fine Arts, where he currently works as a professor in the sculpture department. Having lived in Beijing all his life, Zhan has witnessed many of its transformations over the decades, and has observed the new rapidly eradicating the old in the city. Concerned with the relationship between these two opposing forces, in 1995 he started his Rocks series in the joint exhibition of the Central Academy of Art’s sculpture department.

Seeking a dialogue between new technologies and cultural traditions, Zhan Wang draws his inspiration from the Chinese traditional culture of viewing and appreciating scholar’s rocks. In China, these rocks have long been admired as divine creation, sculpted naturally by the processes of erosion. Pitted, perforated, and hollowed out rocks are seen as the epitome of the dynamic transformational processes of nature. In the eyes of the Chinese people, these rocks symbolize not only the natural world but also the harmonious nature of the cosmos. Grounded in Zhan Wang’s distinguished cultural and academic background, the present work is cast from a metallic copy of a rock which he meticulously sourced. Sheets of stainless steel were hammered onto the rock in pieces to capture the complicated shape. They were then welded together into a solid and biomorphic whole. Hollow inside, the shiny and polished mirror finish of the work gives itself a mercurial look that reflects and takes on the colours of its surroundings. Its perforated and wrinkled surface seem to suggest traces of nature’s powerful forces, as if the original rock was sculpted by water, wind and ice erosion. Although the medium reveals a cold industrial dazzling light and brightness, the form itself is still natural and organic. The artist once said: “My use of stainless steel to replicate these natural jiashanshi appears to be a transformation of this concept. Actually, the transformation is only on the surface. Within it is still the natural jiashanshi form. Even though the stainless steel jiashanshi surface is ‘artificial,’ the interior is actually still a natural form, a concealed ‘truth,’ because true nature has already become void, and in the modernized city this artificial surface has acquired the status of visual reality anew, like the positioning of natural stones in traditional gardens”.