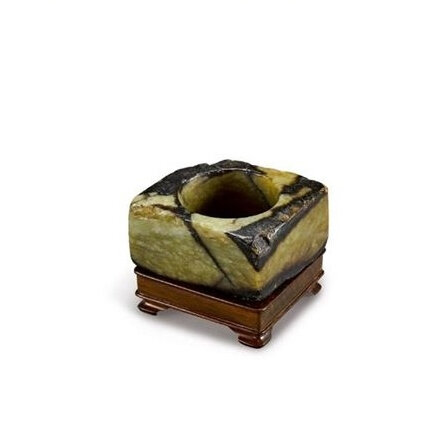 of square section with a central aperture, the stone of a mottled greenish-celadon colour with dark brown patches, wood stand.

Note: The Huai Qin Ge collection was assembled by Lui Shu Ying (1919-2000) from when the Lui family took refuge in the small French enclave of Guangzhouwan on the Southern coast of China during the World War II before it was eventually receded to China in 1946. During this period of instability in Guangzhouwan, Mr Lui met other young professionals, with whom he would remain friends and later form a collector's club and fraternity in Hong Kong called 'Yau Hoi' from the late 1950s. The members of the fraternity regularly met to discuss art and other matters, echoing the scholars' gatherings at the Orchid Pavilion, and cultivated together an interest in collecting paintings, calligraphy and archaic jades – as well as the gardening of bonsai.

See two other archaic jades, also formerly from the Huai Qin Ge collection, offered in this sale, lots 5006 and 5010.